Come for the spectacle, stay for the clothes. That’s the best way to think about Anthony Vaccarello’s tour de force spring 2023 menswear show. He wisely knew when to turn things up to high drama level—and when to turn them way down so that what he showed, his best men’s collection yet, felt intimate and real and strong. Of course, the setting helped. Vaccarello had decamped to the Agafay desert, an hour or so out of Marrakech. It’s a city with real significance to Yves Saint Laurent the man (he had two homes here, most famously Villa Oasis, nestling beside the Majorelle Garden) and the brand (Marrakech is the location of the Musée Yves Saint Laurent). And then factor in the show’s mise en scène: an epic and haunting circular light show installation designed by artist and set designer Es Devlin, which rose up from a mirage pond, and was erected atop the moonlike terrain.

Still, a cinematic setting doesn’t mean a whole lot if the clothes can’t live up to it. And here was Vaccarello’s master stroke: Present a collection which he said, just before the show, was, “for the first time, my most personal. It’s maybe less, let’s say costume-y, than it could have been in the past.” Vaccarello looked back 20 years to when he was a student in Brussels at the La Cambre art school, a time when the tautly drawn lines of Belgian noir were omnipresent in fashion. It gave a defined tailored silhouette, to be sure, but one with a softness and a crumpled sense of being loveworn. Vaccarello took his own sartorial impulses from his earlier years—“It was how I dressed in 2000. It was a look that I loved, and I wanted to recreate that spirit; I was missing that”—and married them beautifully to the classic codes of YSL.

Trenchcoats came sharply shouldered but with a beguiling fluidity to their silhouette, cut with a barely perceptible flutter to them, in black wool or pliable glove-like leather. Lanky pants started high at the waist then fell into an easier, wider stride, some with a satin-y tux stripe running down the leg, or styled like jeans but cut from the most luscious of velvets, both often partnered with delicate gauzy tops that clung to the torso.

The le smoking was a constant and compelling refrain here. Vaccarello had updated the classic tux, utilizing all the inherent fluidity of YSL’s beloved grain de poudre fabric, while others were cut from the slitheriest and slippiest of lounge lizard satins. He shaped his jackets with a judiciously judged jut to their shoulders, then might finish them off by having them clasp the body via their double-breasted or wrapover fastenings, drawing attention to a slenderized waist in the process. Sometimes though the newness came from something of the past. The flash of male décolleté—Vaccarello’s models sported almost to a man their jackets sans shirts—was something he’d picked up on from looking at how house icon Betty Catroux preferred to wear her tailoring back in the day.

Again and again, look after look, it became clear that there was something about the pleasure of yielding to all of this, finding a place of comfort, of peace and of calm. (Vaccarello had even swapped the insistent straight march usual with his shows for the soft ambulation of his models walking in a circle formation.) It’s why, Vaccarello said, he’d chosen Marrakech. Not because he wanted to do a (heaven forbid) YSL in Morocco tribute collection—save for the very occasional appearance of a few diaphanous djellaba-like shirts, the location wasn’t at all apparent in what he showed—but because he understood that the city had been a place of solace and refuge for Monsieur Saint Laurent, in much the same way that Los Angeles has become a place of rest and recharge for himself.

That’s not the only way Vaccarello found common ground with his label’s founder. Saint Laurent was also someone who questioned the conventions of gender, and in recent collections, Vaccarello has really picked up the gauntlet and run with it. Earlier this year, he’d imbued his uber chic women’s collection for winter with some of those longings for his Belgian past. It was a collection he’d loved so much he slyly revisited some of it in this men’s show: a broad-shouldered black coat atop a pair of ivory pants from his men’s, say, mimicked the opening look of his women’s presentation. T  he point isn’t men dressing as women, or women dressing as men; it’s finding that place where great clothes are simply great clothes. And given that it’s likely women as much as men are going to be after these particular clothes when they hit the stores, the stampede for them will be coming from all and every gender. 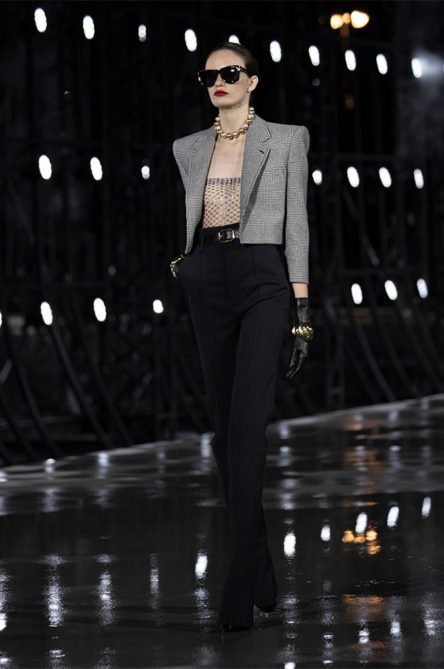