Pierpaolo Piccioli is at ease in the world of couture. He approaches the metier with consummate confidence, and the record of his memorable shows grows longer by the season. Today he just threaded another pearl in his repertoire, staging the fall Valentino collection on Rome’s Spanish Steps, an almost sacred place so dense in strata of history, meaning, and symbolism that it has become a sort of meta-entity.

“This is a deeply personal collection, because it’s all about the history of Valentino,” Piccioli said at a pre-show press conference, held at the label’s headquarters in Piazza Mignanelli. Valentino Garavani founded his eponymous maison de couture in 1959, together with his partner Giancarlo Giammetti. The first atelier was located in Via Gregoriana, a narrow cobblestone street winding down from the church of Trinità dei Monti, which sits at the top of the Spanish Steps. Piccioli wanted this fashion show to start right where the original sartoria di Alta Moda was located, with models bravely walking down the 136 slippery travertine stairs to reach Palazzo Mignanelli. He described it as “the closing of a circle.”

In a sort of counterintuitive turn of phrase, he called the collection The Beginning. He explained that after 23 years working  for the maison, he felt the need to “understand how much of myself there is in today’s Valentino, and how much of Valentino there is in my identity.” He was adamant in refusing that this was a celebratory moment, or any sort of homage. Rather, he called it, “an ideal conversation with the house’s lexicon, which I wanted to do in a more conscious way. And I know that talking about beginnings sounds oxymoronic,” he mused. “But that’s the way I feel, because every beginning brings about the idea of a promise, and of the future.” This is also a concept inherent to the couture practice, “because couture is a continuous beginning, as you have always to start anew, without predetermined patterns or maps. The same design can be interpreted in completely different ways six months or six years after it has been created. What makes the difference are the people who wear it, the human approach—and that’s the story I like to tell.”

Beyond his obvious creative skills, Piccioli’s idea of a new humanism is what has made his practice distinctive. “I believe that it’s my responsibility as a fashion designer to bear witness to the times we’re living in,” he said. “I think that beauty has the power to break through, touch people and their conscience. Taking a radical posture through a strong narration and through images of a world that’s changing has an impact, and gives visibility to values that have to be protected. I believe fashion can be political.”

While diversity was notably absent on some Paris couture catwalks, Piccioli took a rather assertive stance on the subject, focusing on a casting which was as varied as the individually tailored creations he sent down the Spanish Steps. It’s a notoriously difficult location, where the impact of the clothes can get lost in the magnitude of the surroundings. But Piccioli knows the place well (“ it’s where we go everyday to get our espressos at the nearby cafés,” he laughed). He also has memories of coming to Piazza di Spagna as a teenager to watch Donna Sotto Le Stelle (Woman Under the Stars) from outside the barriers. It was a glamorous fashion show held on the Spanish Steps from 1986 to 2003, showcasing the collections of the most famous Italian designers of that time, and was broadcast on TV—a democratic way to get people familiar with high fashion.

“I still remember so well the feeling of being at the periphery of such an awe-inspiring event,” he said. That’s why he invited 120 students from Rome’s fashion schools to the show. “I wanted them to sit and watch the show, and not be left outside [in] the crush.” With the sunset bathing the steps in a golden light and a soulful soundtrack by Labrinth, it was difficult not to succumb to the spellbinding effect. Even if the extraordinary details of Piccioli’s creations were a bit lost from the distance, his colorist talent made them impactful, especially in the finale, with models composing a breathtaking tableau vivant, where Pierpaolo’s painterly sensibility couldn’t be missed.

“Fashion differs from art, in that art just serves itself, while fashion has to deal with the body; that’s why fashion can have a strong say on social issues like acceptance of diversity, or standing for human rights,” said Piccioli. But in its higher expressions, fashion belongs to the realm of healing creativity, and can also be a messenger of joy, poetry, and visual pleasure.

The collection he sent out was spectacular, its supreme sophistication toning down its overtly theatrical effects. For the history books, he indulged in a few reinterpretations of Valentino Garavani’s favorite themes; look 1 was a ultra-short, boule-shaped, slightly padded piumino/cape hybrid blooming with huge Valentino-red 3D taffeta roses, worn over a mini jumpsuit in red sequins; it was inspired by the famous Fiesta dress Garavani made for his first collection. On a similar note, Piccioli offered his own take on Valentino’s black-and-white theme, rooted in an appreciation for Roman mosaics as well as for the Art Deco aesthetic of the Viennese Secession of the 1930s. Look 100 was a long ruffled cape; ethereal and nearly weightless, it was made with “an almost scientific construction,” he explained, with geometric black-and-white patterns surgically cut and assembled from tiny pieces of organza, Chantilly lace, and point d’ésprit.

According to Piccioli, his men’s couture is thriving, as is apparently also the case for other couture maisons. Men’s coats and trenches had the same high level of execution, with shapes kept simple but textures and surfaces treated to inventive visual solutions. A cocoon coat was covered in organza feathers with a fur-like effect; black and white ribbons created the structure of a slender overcoat; a shimmering black trench was studded with thousands of hand-cut, squared-shaped micro paillettes.

But the concept of gender is blurred in Piccioli’s universe; there are no dedicated labels for men’s or women’s couture collections. A romantic dress in ruched and plisséd lemon yellow chiffon was worn by a pink-haired, slender skater who listens to trap music named Timothée. He looked ravishing among the many showstoppers Piccioli concocted.

“A radical vision goes against all the anti-democratic idiocies the world is throwing at us,” he said. “Being assertive in creating beauty isn’t escapism, but the only way of fighting conservatism. And giving a stage to people who are considered at the periphery for me is a duty. This morning, when I was looking at the Spanish Steps during the rehearsals,” he went on, “I had the same feeling of when I was left out of the barriers. When you live at the periphery, so to speak, your perspective is different. You can look at the big picture without being seduced by it, keeping a safe distance, and a cool eye. I still want to stay in that place, outside the fences.” 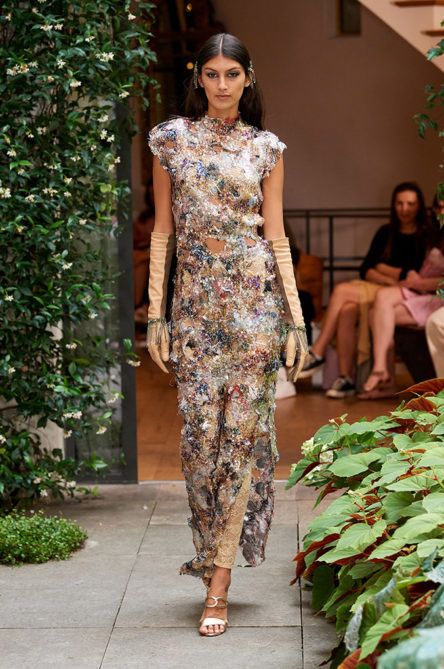 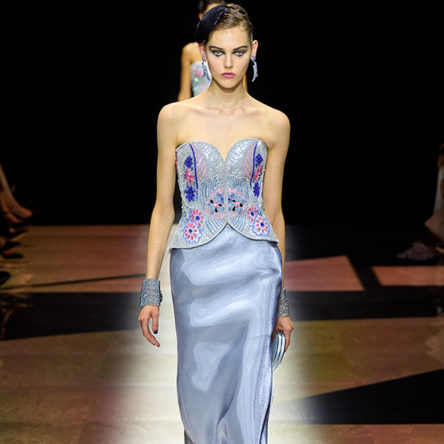 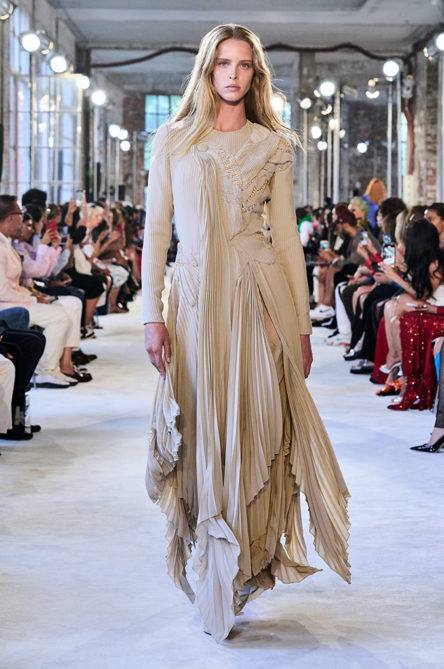