Since rising to fame with ‘Bodak Yellow’ in 2018, Cardi B has had quite the whirlwind of a career. A girl from the Bronx to now one of the world’s most influential female rappers, she has unapologetically staked her claim with every viral record on her rolodex.

Music aside, Cardi B’s reputation as a fashion aficionado precedes her—going above and beyond to redefine what it means to be a bold dresser. Fans would know that the Grammy-award winning rapper never fails to make a statement. A muse to designers like Donatella Versace and the late Thierry Mugler, it’s safe to say that Cardi B has carved a name for herself in being one of the most risqué dressers on-and-off the red carpet, showing off her taste for bright colours as well as her penchant for drama.

The stylist behind her grandiose ensembles, Kollin Carter, has undeniably brought the rapper’s wardrobe to new heights with each appearance, too. Having worked with a roster of top stars including Normani, Ciara and Naomi Campbell, Carter’s coordination of alternative bondage-inspired pieces paired with classic motifs brings about a distinctive flair and fashionable swagger to each look he pulls together. A power pairing in their own right, the duo continues to bring forth show-stopping looks—from gilded corsets to flamboyant feathers.

Here, we round up the most stand out looks from Vogue Singapore’s July/August cover star.

Cardi B arrived to the 2022 Met Gala dripping in Versace and coordinated her look with a print-wrapped convertible. Her ornate gold dress, embellished with crystal Medusa medallions, was definitely a showstopper that hugged her silhouette in all the right places.

JPG for the win

We all know Cardi B loves a good jumpsuit to accentuate her curves. This mod-patterned one-piece from Jean Paul Gaultier was paired with futuristic sunnies from Gucci along with a pair of orange heels from Aquazzura.

Bringing back the puffer jacket of the ’90s, Cardi B showed some major skin in a satin bralette and fluffy boots. Echoing the eyewear trend of this season, Cardi sported some wraparound sunglasses for a futuristic twist.

Show-stopper from head to toe

Cardi B kicked off the night at the American Music Awards with this monochrome ensemble from Alexandre Vauthier, decked out with jewellery from Swarovski. Sporting a modest neckline, Cardi made sure to show some leg with the side slit. Of course, her cascading feathered headpiece was the cherry on top of the entire outfit.

Another jumpsuit moment by Cardi B: Paris edition. The rapper modelled a vivid green suit by Richard Quinn, alongside matching sunglasses by Bottega Veneta.

Glitch in the matrix

At Paris Fashion Week, Cardi B went cyberpunk goth with this spiked-out coat and Rick Owens platform boots. And to top off the look, Kollin opted for a leather newsboy cap from Chrome Hearts and shades from Jaupin.

Cardi stunned in a full Balenciaga fit for Paris Fashion Week—in a tabloid trench from the maison. Never one to shy away from statement headwear, the rapper donned a hat along with jewellery from the brand’s fall 2021 collection.

The rapper wore an iconic vintage piece from the Mugler 1995 archives to the opening of the Mugler museum in Paris. Feathers made yet another appearance on her floor length-cape ornamented with fiery red quills.

Cardi B made her way to downtown Los Angeles in a see-through dress by Forbidden Kn0wledge, as she took on an interesting mix of knit with sheer meshing. Classic studded heels from Saint Laurent completed the look.

Featured in the ‘Up’ music video, this porcelain gilded corset and garter set was later revealed by Kollin to be a custom piece. Best admired in up close detail, the outfit featured beaded tassels and delicate gold moulding down the bodice.

The term ‘basic’ is certainly not in Cardi’s dictionary. At the Vogue Forces of Fashion panel back in 2019, the rapper arrived in a swanky leather suit by Sally LaPointe in colour-blocking hues of teal and orange.

In her ‘Money’ performance at the 2019 Grammys, the rapper stole the show at the Grammys in a cheetah print bodysuit embellished with rhinestones from Mugler’s fall 1996 collection. To pile on the drama, her fierce outfit showcased a matching organza crinoline.

Cardi showed off her sophisticated side during her appearance at Rihanna’s Diamond Ball, in a dreamy voluptuous tiered gown made by Lebanese designer Georges Hobeika. Cinched in at the waist with diamond detailing to accentuate the rapper’s curves, Cardi kept the accessories sweet and simple.

Cardi B’s 2019 Met Gala look is a hard one to forget. The feathered gown by Thom Browne was inspired by the female form and the custom bodice was created in collaboration with Stefere Jewelry. It featured 44 carats worth of rubies as nipple covers and the entire look took over 2,000 hours to make. A small price to pay in the name of fashion, if you ask us.

At the 2019 MTV VMA’s, Cardi opted for a scarlet red Déviant La Vie dress with lace-up detailing down the front and back, which left little to imagination. For shoes, the rapper went some studded gladiator heels by Christian Louboutins to match the crimson scheme.

Cardi showed up to her first Met Gala back in 2019, on the arm of Moschino designer Jeremy Scott, with an ensemble inspired by the exhibit’s theme, “Heavenly Bodies: Fashion and the Catholic Imagination”. The cream-hued gown coupled with the jewel-encrusted headdress had the rapper looking like an angel on earth that evening. A ornate creation that supposedly took Moschino four weeks to create.

In 2019, Cardi made history by being the first female rapper to win ‘Album of the Year’ at BET Awards for Invasion Of Privacy. The rapper accepted it in a lime-green number with structured shoulders designed by Nicolas Jebran, with the dress’s glimmering bodice featuring intricate braid work at the décolletage and some extra high leg slits.

Pearl of the ocean

A dress that went instantly viral and also a monumental one that marked the start of the rapper’s friendship with Thierry Mugler. For the 2019 Grammys, she wore an archive dress in its original form, originally worn by Simonetta Gianfelici back in 1995. The statement ensemble, along with blush pink opera gloves, down to the pearl accessories, made this an iconic red carpet moment in our books. 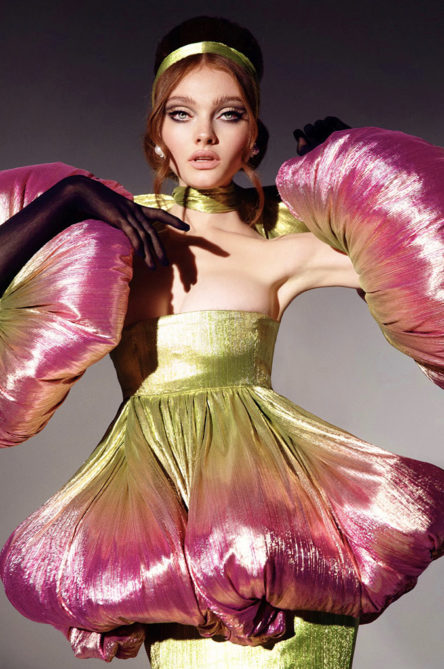 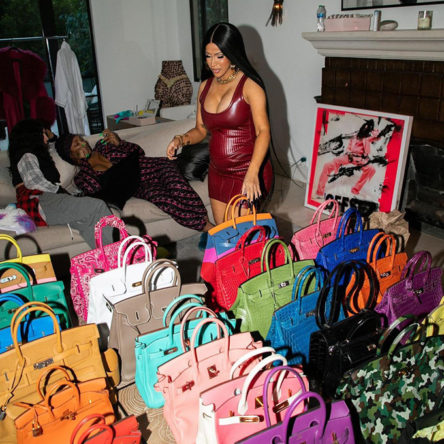 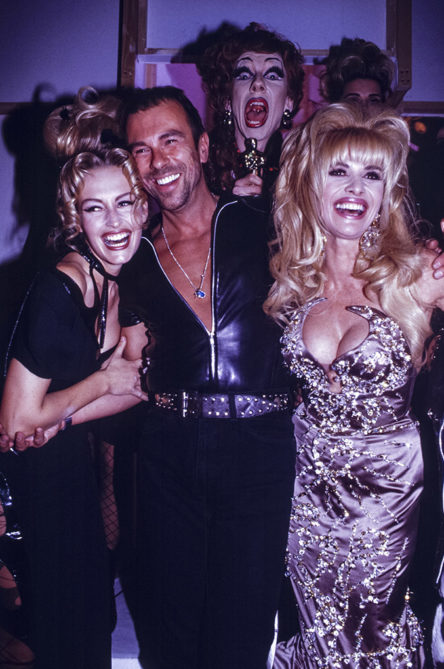