It was a year ago that Silvia Fendi kickstarted the current mania for male midriffs in fashion with her crop top suiting for SS22. Asked today if it feels satisfying to see a Fendi-fired trend ricochet across the fashion sphere, she said: “Yeah, it does! When we did it, it was very well received—and there were so many comments on Instagram. And it was the moment to do it. But if you look at all of our shows, there is always something that might be a bit disturbing for some.”

Today’s chief Fendi disturbance to the fashion force, as nominated by Silvia, was look 27’s pale greige coat in ultralight technical gabardine. Thanks to the ultrasound bonded seamless internal pockets, the coated buttons, the fluidity of the material and the gently kinky serrations at each shoulder, it looked more akin to a shirtdress. In the editing process, she said, her team had repeatedly proposed it being consigned to the nearly-rans: “But I said ‘No, this is my favourite—you cannot take it away.’”

Her team did have a point in that look 27’s intriguing ambiguity rested on perceptions of gender signifiers in clothing, whereas the rest of the collection was firmly trad masculine gender-wise, but often deeply ambiguous around the fulcrum of materiality. With the exception of one shirtless tuxedo (to my colleagues back at Runway towers’ general chagrin, the only glimpse of midriff), most of the looks were rooted in a mid ’90s Cali workwear/skatewear aesthetic, complete with tote-toted runway skateboard. What seemed a denim-heavy collection was not always so: look 34’s soft-washed patch pocket coat was crafted of shaved mink, while look 10’s blouson—a little more evidently—was fashioned from strips of dyed shearling. What looked like crispy cotton khakis turned out to be cut from ultra-thin nappa.

Those house-specialty trompe l’oeils apart, there was a dialogue between texture and smoothness in the play of fringed denim and moccasin against that seamless ultrasound bonding. Jewellery included Delfina Delettrez Fendi’s nugget necklaces, friendship bands and pocket-fob timepieces: bags ranged from denim Peekaboos with water bottle holders to recycled double-F mesh plastic totes via buckets with removable linings that were desirable in spades. Moccasins apart, chief footwear hotness came via hand-beaded skate sneakers and the moulded double-F-pressed slides that were reproduced as cute key fobs.

As for that abstract pattern, it began, Silvia said, as a cowhide-inspired series of splodges that morphed during the creative process into a consideration of the abstract patterns of meteorological maps and barometric pressure systems. As well as the slits in the shoulders of that ambiguously featureless shirtdress/coat, there were perforations that doubled as seams across the collection. Along with the handsome cropped crown bucket hats, these were designed to allow heat to lift away from the body of the wearer: that they might simultaneously inflame the eye of the beholder was by no means by-the-by. “I wanted a feeling of pressure,” said Fendi. That pressure in turn generated pleasure, drawn from watching a collection that was simultaneously highly sophisticated yet powerfully wearable. 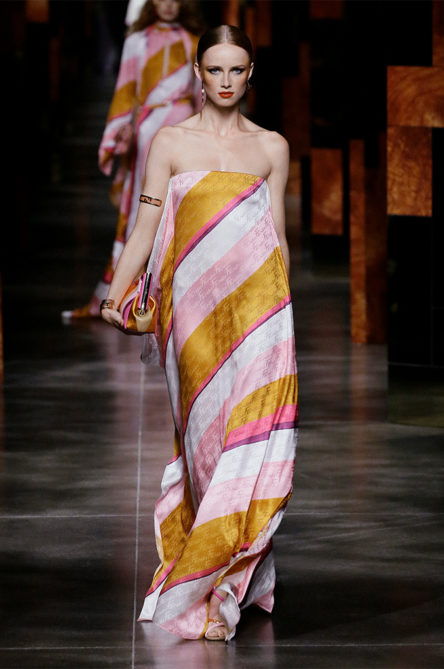 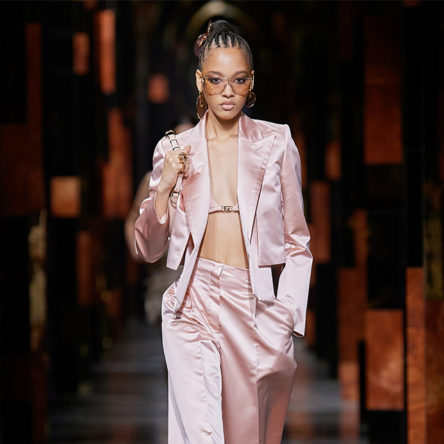 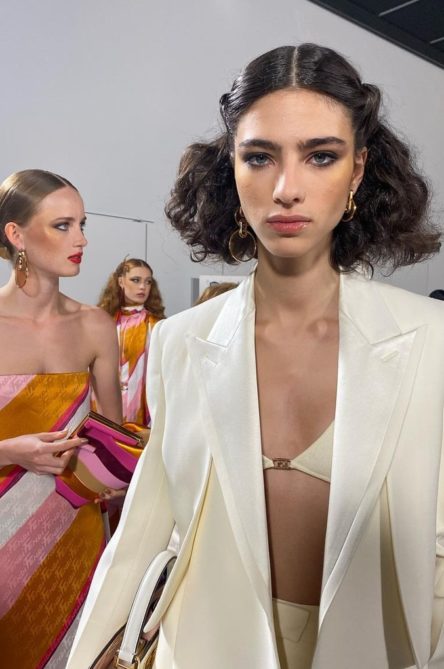 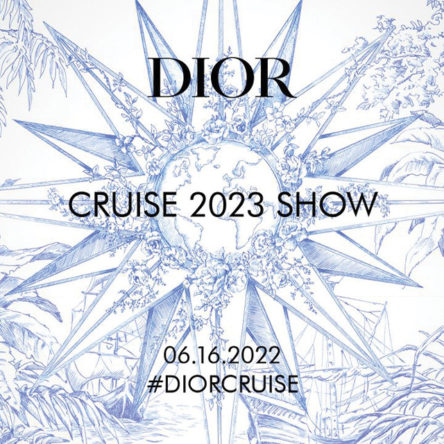