At the last edition of the Cannes Film Festival in 2019, South Korean dark comedy Parasite clinched the top honour Palme d’Or, kick-starting a stunning award season run that ended with the movie winning Best Picture seven months later at the 2020 Academy Awards. Song Kang-Ho, who plays the lead male character, was already an acclaimed actor, but it was Parasite’s win at Cannes that launched him to an unprecedented level of global recognition.

Two years later, Song is back at Cannes, wearing a classic black suit to the opening ceremony and the same affable smile that endeared him to the world in 2019—but now on the other side of the table. As a member of the Feature Films Jury, he is responsible for choosing Parasite’s Palme d’Or successor, revealed to be horror-thriller Titane at the closing ceremony on 17 July.

While Song is the only Asian on the nine-people people panel led by Spike Lee, he heads a veritable pack of continental talents at Cannes this year, including Hong Kong’s Tang Yi, who directed Palme d’Or Short Film awardee Tian Xia Wu Ya, and Singapore’s own Anthony Chen. Chen first made a name for himself when his debut feature film Ilo Ilo clinched the Camera d’Or at Cannes 2013, and he’s back this year to present film anthology The Year of the Everlasting Film, cutting a svelte figure at the premiere in a classic Valentino suit.

Another industry veteran is Gemma Chan, who made her Cannes red carpet debut in a two-piece set from Valentino, then followed it up with a floral-cutout dress from Oscar de la Renta for the closing ceremony. Meanwhile, China’s Meng Li returned to Cannes after an eight-year absence but looked like she hasn’t aged a day in a floaty yellow gown from Yanina Couture. The off-the-shoulder plunging neckline set the stage for her outfit’s true show-stopper: a dramatic bib necklace from Bulgari. Others opted for a more neutral palette, like actress Sonia Yuan in a one-shoulder black and white ArtClub dress and fellow Chinese ingenue Lucie Zhang in a black Dior crepe silk dress.

Across the board, the attention to detail was incredible: Reika Kirishima’s ethereal Valentino dress was embroidered with three-dimensional floral and butterfly motifs; Huang Miyi’s woven jacquard Dior dress was emblazoned with the zodiac chart on the front; and Azmeri Haque’s Aarong saree featured a statement gem-studded backpiece and intricate handweaving using the traditional Jamdani technique.

There was no shortage of stars flying the flag high for Asia at Cannes this year, both on the screens and the red carpet. Below are our picks for the most stunning outfits.

Meng Li in Yanina Couture and wearing a Bulgari necklace 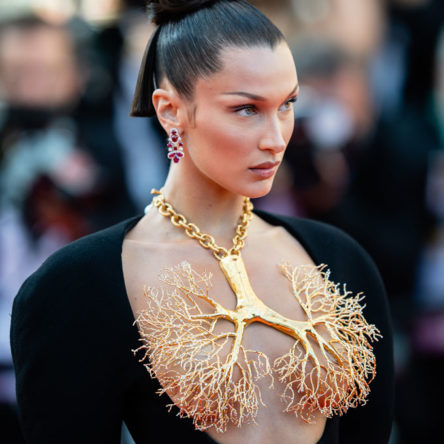