With a hijab wrapped around her head, a bright smile and twinkling eyes, Anna Belle Francis needs no introduction—especially to 90s kids who grew up in Singapore watching her on primetime television shows such as Triple Nine to Growing Up, and later on, Glen Goei’s feature film, Forever Fever. Now 42 years of age, the prolific actress and show host has stopped acting and hosting—except for her own shows, The B. Halal show and Hitchen—and is now a restaurateur and mother of three. We know her as Anna Belle Francis, however her Zoom name says something different: Seri Ayu, which means glow and beauty.

“I just recently started referring to myself as Anna Belle Seri Ayu Francis on all my social media platforms,” she smiles. Francis was born into a Eurasian family and grew up a Catholic. In 2000, when she was 21, Francis married Sheikh Haikel, a Muslim rapper and restaurateur—while most think her conversion to Islam was because of Haikel, it was actually a soul-searching trip to India in her late teens where she first had a personal encounter with the religion.

On how her family situation inspired her spiritual questioning

When I was 12, my parents divorced and my family moved to Los Angeles. My father tried to stay here for a bit and make ends meet, but when I was 15, he moved to LA, too. He asked me to go with him, but I had already built up a life in Singapore so I decided to stay put. From that point on, I was on my own, trying to raise myself and make a living at the same time. I was schooling, acting, and waitressing simultaneously. But juggling so many things by myself started to wear me down, and I felt like there was something missing in my life.

I started questioning my spirituality, so I went on a one-month spiritual trip to India with two friends. It was before everything was online, so it made discovery feel more raw and so much more fun.

On the turning point in her life

We were visiting the Taj Mahal in Northern India and then, I heard it—the adhan, the Islamic call to prayer. Imagine a beautiful, white, glowing Taj Mahal with a backdrop of a stunning sunset, and the adhan ringing out in the background. In that moment, my hairs stood up. Even talking about it now, 20 years later, my hairs are standing. It moved me in another way.

“Even talking about it now, 20 years later, my hairs are standing. It moved me in another way”

Afterwards, we journeyed to Kashmir. One night, I looked up at the mountains and the sky was just filled with stars—something we would never see in Singapore—and my best friend started telling me about God. She said: “We don’t have to travel such long distances to find God. Maybe He is closer to you than you imagine.”

My friend’s words got me thinking, and in hindsight, I think my true path to spirituality started in India. I started soul-searching and asking myself a lot of questions about what I wanted and believed in.

In Northern India, there’s this custom where people knot a red string and make a wish, and if your wish comes true, you’re supposed to go back to the place and untie the knot. It’s about putting out into the universe what you want. My wish was that I would go back to Singapore and find a person who will pull me on the straight path, because I was tired of being alone and coming back to an empty apartment; I just craved a family.

Lo and behold, I came back to Singapore and the first person I got close to was Haikel. I used to see him around and thought he was obnoxious—he would dress in hip-hop reggae and was always followed by an entourage. Never in a million years did I think I would fall for a guy like him.

But then, we were sent to a singing competition in Vietnam. I sang and he rapped, and we came in third. But more importantly, we were having a good time. What attracted me about Haikel was that he just wants to be who he is and makes no apology for it. I remember thinking, “How can anyone be that real and bold and unafraid?”

We started dating, and eight months after we got together, he proposed to me. It was definitely not something either of us planned out, but we both felt like it. So we married when I was 21 and Haikel was 24. Three years later, I fell pregnant with our first child.

And no, I never did go back to India to untie the knot.

On converting to Islam and how her loved ones responded

I thought my parents would be against my conversion since they raised me as a Catholic, but to my surprise, they accepted my decision very quickly. My dad was so cool about it. He said: “Belle, as long as you’re happy, you can do what you want.” My mum also never restricted me, maybe because I’ve always been very independent. I think it also helped that they could see Islam made me a better person. Religion is a tool for navigating life, and if this tool I’ve chosen guides me to make the right choices and towards the better good, no one will be able to say anything.

“Religion is a tool for navigating life, and if this tool I’ve chosen guides me to make the right choices and towards the better good, no one will be able to say anything”

If you know a new Muslim convert, please don’t ask them why they chose to do so. They are still at the beginning of their journey in faith, so give them time to grow into it. The hardest part is for them to be accepted by their family. A lot of converts don’t tell their parents about their decision, and that’s such a sad place to be—to have to hide your religion and such a core part of you from the people who love you and raised you.

On wearing a hijab

Over the past 20 years, my faith has only strengthened. It has become a fundamental core of my being and the basis of everything that I do. In 2017, I started wearing a hijab because I felt like it’s the right thing to do as a Muslim woman since that’s what Islamic rules require. The biggest challenge for me actually came from the entertainment industry—people would say: “Oh, you should take off the hijab when you’re acting.” But that’s not how it works. Wearing a hijab is a full-time, lifelong commitment.

A lot of non-Muslim friends have asked me if I was forced into it, which really speaks to the broader misconception people have of Muslim women having no choice. But no, I actually feel more liberated and empowered doing what feels right. I feel stronger in taking a stand when it comes to what I believe in, especially now when wearing a hijab is such a jarring demonstration of who I am at the core.

People also think us Muslim women can’t express ourselves sartorially because we have to cover ourselves up. At first, it was difficult for me because I’m a surfer girl at heart, so I was quite upset about not being able to wear bikinis, sundresses and resort outfits anymore. However, after putting on my hijab, I slowly started to find my sense of style. Fashion is reflective of who we are, so it’s definitely possible for Muslim females to express our personal style in other ways.

Besides, times have changed, and people are beginning to actually embrace the hijab. A lot of top models and celebrities are Muslim now, and designers are also incorporating hijab-wearing into their designs.

“Fashion is reflective of who we are, so it’s definitely possible for Muslim females to express our personal style in other ways”

What I love best about Hari Raya is getting together with loved ones, dressing up, collecting green packets, making the family’s secret recipes, and eating. Hari Raya is a very traditional occasion, so the meal never changes—every year, we eat whatever Haikel has been eating since he was a child. But it’s special because we only have it once a year. We usually have seven to eight dishes, and my favourites are sambal goreng pengantin and serundeng with a lot of lime. Muslim families are very secretive about their recipes, so I wrote down all the family recipes that Haikel’s late grandmother and father taught me—I’ll make sure to pass them down to my kids. 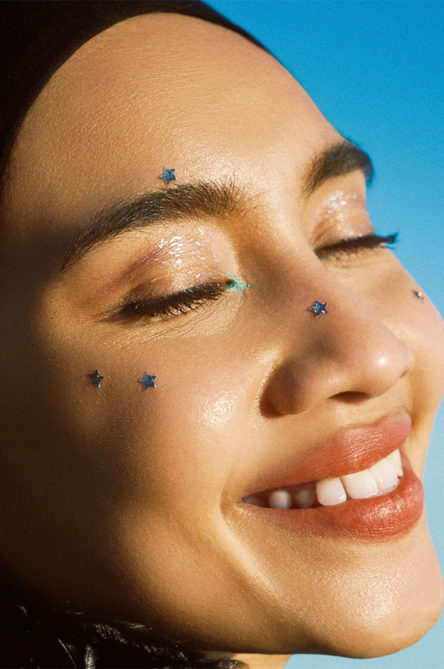 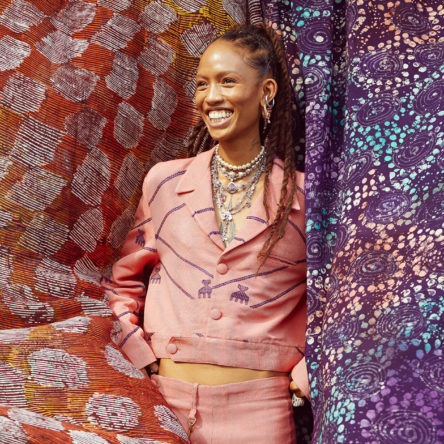 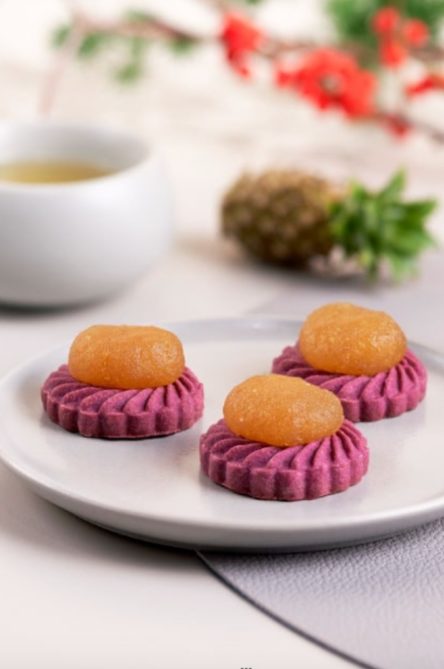 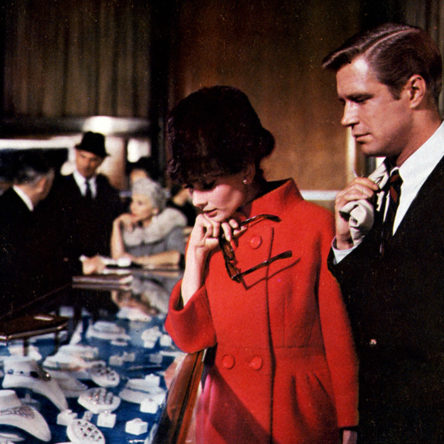