The fashion collaboration space is as crowded as a subway junction at rush hour—all sorts of brand combinations have been tried. At the forefront of the phenomenon is the sportswear giant Adidas, which has been generous with its famous insignia, inviting mega-brands and superstar designers alike, not to mention skaters and hip-hop impresarios, to twist, turn, and otherwise hybridise the iconic trefoil.

In terms of buzz-generating partnerships, though, it’s hard to beat Adidas’s pirouetting love triangle with two of the brightest stars in the Kering stable, Gucci and Balenciaga. Alessandro Michele got there first, launching his interpretation of Adidas classics at Gucci’s fall 2022 Exquisite runway show back in February. A substantial ready-to-wear collection is arriving in stores today, complete with a dedicated advertising campaign shot by Carlijn Jacobs. Michele rejects the term “collaboration,” but the two companies have a natural expressive affinity, as the three-striped motif is a recognisable logo for both labels.

Here, he talks exclusively with Vogue about teleporting the rather straightforward Adidas lexicon into his own more visually eclectic territory. And that’s not all—he also gets candid about the Gucci/Balenciaga dynamics and on the artistic collab of his dreams.

I’d like you to expand on how the idea of collaborating with Adidas came about—even if you tend to consider the collaboration concept a bit narrow, and you don’t particularly favour using the word collab.

The word collaboration is really just a semantic convention, and of course I use it functionally, but for me it has a completely different meaning. Since the beginning of my tenure at Gucci, I’ve worked on a series of so-to-speak crossovers in a more esoteric way, in that in my shows I’ve always put together and layered disparate ‘talking elements’ which worked as some sort of triggers or magnifiers, as well as defining perimeters or enhancers, or which engaged in a mysterious, hidden dialogue with the audience.

Introducing multiple, often discordant references has always been inherent to my narration. Metaphorically speaking, it is as if I had drawn a moustache on Mona Lisa’s face. My language is eclectic, and it needs many words, many images coming from other people and from other worlds.

But what I was doing was probably rather expressive, and others have discovered how fascinating the clash of unlikely crossovers can be. Which is an m.o. that represents the contemporary world so well; to be open to different languages is a sign of our times, and we can talk to each other freely. Fashion, whose perimeter has always been rather puristic and fenced, has opened up, welcoming forays coming from other places and other spaces. Just think about how fascinating Virgil’s experiment at Vuitton has been. What we define as collaboration is actually an encounter, everybody does it his own way, as it happens also IRL. Today there’s a new language that has been created, it doesn’t have to be trivialised, or become an obsession. As far as I’m concerned, from time to time I feel the need to play with someone else.

Like what you’ve famously done with Demna in the Hacker Project in 2021, where Gucci and Balenciaga swapped codes…

Yes, that was a project born almost for fun, chatting at home with my partner Vanni, who’s prone to deep thinking. He always sees me working on my creative projects and he questions what I’m doing and why, so one day he asked me: What will happen if a fashion brand goes to another fashion brand and they exchange things, is it doable, could it really happen? OMG, I said, I think that’s rather pornographic, I have no idea…but then my curiosity got tickled, and I thought it could be real fun, and since I like very much what Demna does, I called him up and *ecco!—*it happened like that. We played like kids, each of us did what he felt like doing with the other’s signifiers, we had fun and I think it was a successful experiment, which is proof of how fashion is able to regenerate itself without losing its identity. Quite the contrary, this encounter has actually generated new images and new meanings. Fashion is definitely a very powerful language.

Let’s say that your crossing paths with Demna seems to be rather karmic, as it happens quite often. He has just released his own version of the adidas collaboration in his resort show in New York. What do you think of it?

I think that the show was extraordinarily beautiful. I believe that we share a sort of dialogue. We do things differently, but there’s some sort of affinity—and also we both work in this specific moment in time, and we have to confront similar issues on many levels. What he does always resonates really powerfully for me. As for the Adidas exercise, it’s as if we both had painted a version of Monet’s Water Lily Pond…I’m older than Demna, and I lived my personal experience with Adidas at a time when all the kids wanted to have an Adidas tracksuit. It wasn’t strictly a sporty tracksuit for the gym. It was almost an informal version of the formal traditional masculine suit, but it was so cool. Or you could wear only the zippered jacket styled with jeans, as my mother used to do. So I grew up with this idea of Adidas being a bit bourgeois but also rather subversive. It introduced a modern idea of freedom, mixing sporty codes within the bourgeois repertoire while loosening up its formality, giving the possibility of a less constrictive self-representation.

I don’t know what Demna’s personal story with the Adidas mystique is, but we’ve approached the same codes in a completely different way. My approach has been a fun way to look at that world, when sportswear had a chic retro edge, while Demna has interpreted it more like a uniform. The same thing can transform and mutate into completely different entities, it just depends from which perspective you look at it. It’s utterly fascinating.

Speaking of mutations, your work has often addressed the idea of metamorphosis, there’s a visual and conceptual subtext of things transforming and becoming something else, which also resonates with the fluidity of today’s ways of self-representation…

The experimentation with Adidas started from an affinity of codes, but also from something ambiguous, which is another concept very much present in my work—the ambiguous nature of things. Today sportswear has completely invaded the space of ready-to-wear. While in the ’90s it was more a juxtaposition, like borrowing sporty elements to be used as styling corollary, today the mutation is complete. The sneaker will certainly have pride of place in fashion history books, it’s the shoe which has changed the perception of contemporary fashion.

What I wanted to do with my Adidas experience was a journey through the mutation of sportswear codes. So I transformed them into a myriad of specimens, like into a sweeping, dark velvet gown fit for the Countess of Castiglione or for a weeping widow; I’ve morphed them into romantic concoctions which would’ve suited Victorian damsels or the heroines of the movie Picnic at Hanging Rock; I was also thinking about the stripes of Napoleon III’s military uniforms…

The Adidas x Gucci collection which is out today looks like a complete Guccification of adidas. Your decorative flair has taken over the adidas emblems like the Three Stripes and the Trefoil, which you’ve morphed into a print, spreading it on every possible surface, from bags to clothes to accessories…

Yes, I’m a bit of a situationist, I’ve transformed this experience into a kaleidoscopic experiment, like when in grade school you play with your chemistry set; there’s always a playful element of disguise in my journeys, as if they were randomly made by a child, you shuffle the chemical ingredients, you mess up the road signals…Even in the advertising campaign there’s a touch of ambiguity, we shot it in movement, we wanted dynamism, but you don’t really understand if we’ve taken it seriously or we were actually being playful… And the Adidas lotus flower has become a hybrid between William Morris and the wallpaper of my mother’s drawing room, the Three Stripes have become something else. I dived into Adidas’s archive, and I’ve worked within a perimeter of rules and respect for their codes, but my take on decoration is rather obsessive, so obviously I wanted to mutate them. And Adidas in its history has been able to absorb innumerable transformations. Think of the Adidas dress Madonna wore in 1993, reconfigured by designer Laura Whitcomb, it was actually a very inspiring first. This practice of mutual experimentation between different languages has now become rather commonplace. Today the idea that we can do much more than we thought possible has propagated, I hope I’ve contributed to make the concept circulate.

Is there any dream collaboration you’d like to pursue?

If he were alive, Keith Haring would be my dream collaboration. It would’ve been fantastic, because he was the artist of the hieroglyphs—logos are actually hieroglyphs. I remember here in Rome, he painted a tunnel near the train station, where I used to pass by everyday. It was a wonderful work, full of meanings and so cool, and every time I saw it it transported me into my desire to see New York. He as an artist has really inhabited my Pop imagery. His obsessive way of covering every surface with his glyphs, transforming them into something else, is actually very similar to my obsession to metamorphose, to modify and mutate.

I’m not saying that I would’ve loved to meet Andy Warhol, I’m already happy with Keith Haring! But picking up again on the idea of collaborating creatively with different talents, my idea of fashion is that it’s a constellation. An orchestrated medley of different times, sounds, and places, fashion has never been a pure, untouched space. If we think of the greatest fashion designers, they’ve all exchanged languages with those of others—and art, music, literature have done it too. If you look and listen to the words of others, you can accomplish great things. 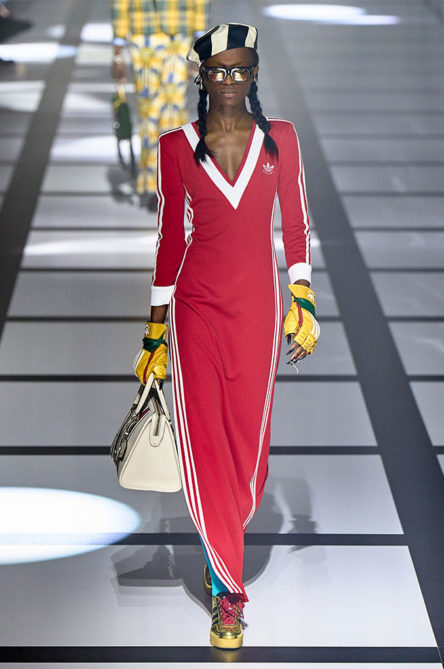 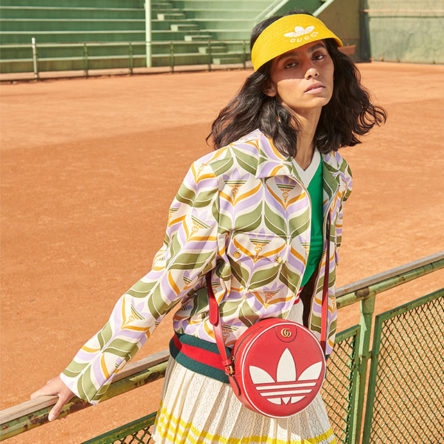 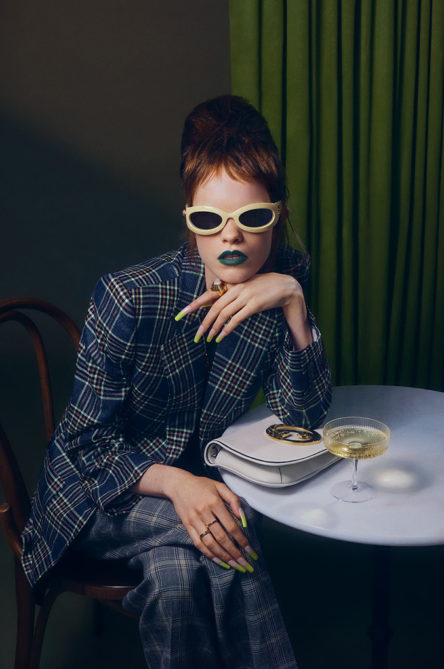 March to the glamorous beat of the Gucci Love Parade 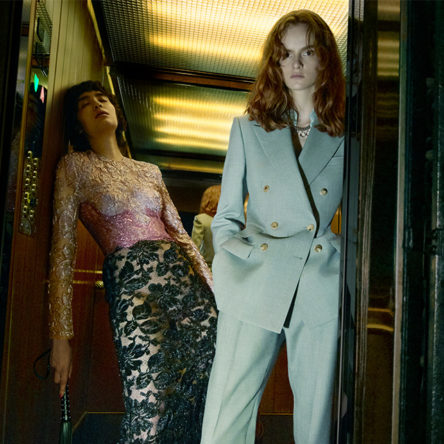