Walking the line between the restrained decorum of England’s royals and the signature bombastic styles that exploded onto the fashion scene in the 1980s? Costume designer Amy Roberts was more than prepared to step up to the plate, working on the fourth season of Netflix’s The Crown. Not only does Roberts have a historical costuming pedigree, with projects that span the Elizabethan era to Dickensian London to the modern day, but she also headed up the show’s previous season, taking home an Emmy Award for her work last September.

It’s too early to tell whether her work on The Crown’s newest season will continue the series’ Outstanding Period Costumes winning streak (Michele Clapton and Jane Petrie, previous costume designers, took home Emmys for the first and second season, respectively.) But things, unlike the state of Charles and Diana’s marriage, are currently looking good.

Roberts commands a costume team of about 20 people—dyers, pattern-cutters, sewers, and assistants—who make all of the principal costumes. But for big outdoor crowd scenes they can have as many as 100 costumers outfitting more than 400 extras on any given day. “Everybody on screen, whether you’re a passer-by on a London street or the Queen of England, all are fitted,” Roberts says. “They’re all as important as each other. It’s quite a big task, so we need quite a big team.”

This year, all eyes have been on the two new players introduced into the fracas—Diana Spencer, Princess of Wales (the brilliant newcomer Emma Corrin), and Prime Minister Maggie Thatcher (the luminous Gillian Anderson, who plays Thatcher, according to one Twitter user’s analysis, “like a serial killer”). Dressing both of them, Roberts says, was “an amazing thing.”

80 individual costume pieces comprised Diana’s wardrobe, charting her journey over ten episodes from the naive and bubbly teenager to the shattered and resilient young woman. In The Crown, the vibrant animal-patterned sweaters and pie crust collars that mark her Sloane Ranger stylings eventually give way to printed silk polyesters, gorgeous Catherine Walker gowns, and the chic skirt suits that betray the silhouette of the fashion icon the princess would become in the ‘90s (and, presumably, season 5).

And Corrin’s Diana can hardly be mentioned without uttering the phrase “wedding dress” in the same breath. The real Diana’s real dress was a spectacle that defined the decade, an antique taffeta-and-lace number with a 25-foot train, and was viewed by 750 million people across 74 countries. By contrast, in season 4’s third episode, ‘Fairytale,’ the viewer glimpses the dress for but a few seconds, and mostly from the back. Nevertheless, Roberts explains, it took three people four weeks and five fittings to recreate the look.

“It all kicked off from actually meeting David Emanuel, the [real dress’] designer—along with his wife, in 1981,” she says. “He came in to meet us in the studio, myself and my assistant and Sue [Crawshaw, principal cutter and head of the costume workroom], who was tasked to make the dress.” Roberts, her assistant, and Crawshaw poured over the original drawings of the dress that Emanuel brought with him, and she peppered him with questions about its design, which he was more than happy to answer.

“We had all the colour choices laid out,” Roberts adds. “It’s quite hard—you look at photographs, you look at film—but you’re never quite sure what the colour of the dress is. Is it cream? Slightly pink? So the first question was, “David, what colour?” And he said, “That one.”

The dress wasn’t designed to be a pitch-perfect recreation of its historical antecedent so much as it was supposed to be evocative of it. “My job was just to recreate for people how they felt about the dress. There were 2,021 pearls on the bodice alone; it wasn’t my job to do that,” Roberts says. “It was just to give you an idea of it.”

That idea of balance, both adhering to and deviating from the historical narrative on which the show is based, perhaps defines the show’s design more than any other. “There’s a mixture of accuracy and naturalism,” Roberts says. “Obviously with uniforms, like the Queen in her Trooping the Colour uniform, that has to be forensically accurate. But then there are moments in between where we don’t actually know what they did or said behind closed doors. And you get to be more imaginative and filmy and glamorous. It’s a brilliant job for that mixture; you’re kind of grounded by certain events, but then you get to fly free with lots of other scenes.”

That fanciful mixture infiltrates Diana’s wardrobe in the fourth season to great effect, as Corrin is dressed in a number of outfits that fashion critics have pointed out Diana wouldn’t have worn until after her separation from Prince Charles. Post-divorce, Diana favoured more dangerous necklines and mini silhouettes. (Who could forget the Revenge Dress, after all?) Especially in the second half of the season, the audience is treated to seeing the fictional Diana dress in the late ‘80s as her real counterpart only began to do a few years later. That famous one-shouldered Catherine Walker is a prime example, realised on screen circa 1987 but not rocked in actuality by the princess until 1991. The implication that we’re barrelling towards a new era is heightened every time a paparazzo’s flashbulb goes off in Diana’s face, and time seems to decelerate (literally—the frame rate moves into slow-motion)—we all know what’s coming, these moments seem to say.

Dressing Anderson as Thatcher was the other focal point of the season for Roberts. Especially later in the season, implementing the Prime Minister’s signature pleated ‘power shoulder’ silhouette without making her look like a caricature of herself was key. So too was consciously shifting Thatcher’s style away from gesturing at that of the Queen (Olivia Coleman);  in the first few episodes, we see them carry similar handbags, bear identical silk bows, and don the same strings of pearls, only for those fashion echoes to fall away as Thatcher comes into her own as a political figure—or historical monster, depending on who you ask.

For the first half of the season, though, Roberts and her team were determined to accentuate the Prime Minister’s more sympathetic side. “Paul Whittington [one of the season’s directors] and I talked about Thatcher at Balmoral a lot. It’s an episode which is quite light and quite funny—seeing this very powerful and intelligent, very urbane woman out of context and out of place. You don’t get more rural than the Scottish Highlands,” Roberts says.

For the episode, ‘The Balmoral Test,’ Anderson’s Thatcher shows up to the countryside estate wearing heels and jewel tones. The Royals, dressed in deerstalkers and tweed, are taken rather smugly aback. “There she is, in these sort of ‘man-made’ rather than ‘God-made,’ earthy colours, do you know what I mean? So we really wanted to push that kind of ‘separateness’ of her from this established family, with just the most inappropriate outfits and colours for hunting in the Highlands.”

The next season, slated for release on Netflix in 2022, will see Diana and the other Royals pushed into the 1990s and even further into living memory. “The fourth season is really just the tip of the Diana we all know, and I think season 5 will be more about the Diana that most people remember: that glamourous fashion icon,” Roberts says. “For now, it’s just the beginning of this journey of a young girl who is then magicked away to a fairytale palace. Then, as we know, it all goes wrong. But she’s only just starting out now.”

Watch the fourth season of The Crown.

With the conjunctive premieres of the fourth season of The Crown and Netflix’s original limited series The Queen’s Gambit, the Brooklyn Museum has curated a virtual exhibition of digitally rendered and interactive 360-degree views of costumes from the two series called The Queen and the Crown, viewable online for free. 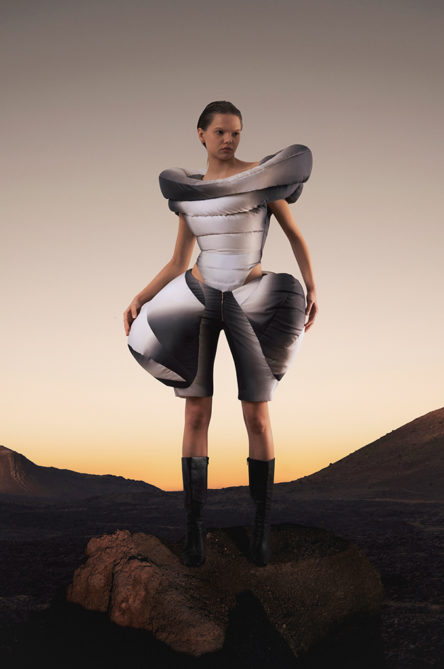