On Friday, Bernadette Belle Ong strutted down the Miss Universe runway during the National Costume segment in a sparkling red bodysuit with poufy red and white sleeves. Her walk was fierce and her gaze was confident, but it was what fluttered behind her that caught everyone’s eye. Hand-painted on her red-and-white cape in bold brushstrokes was the emphatic declaration: “Stop Asian Hate”.  The three words sent a powerful statement amid a tumultuous time of increasing hateful behaviour towards Asians all around the world.

In a series of Instagram posts, Ong said of her statement-making costume: “What is this [Miss Universe] platform for if I can’t use it to send a strong message of resistance against prejudice and violence! This costume is inspired by the Singapore National Flag. The red represents equality for all. White symbolises everlasting virtue. Singapore is a place for all races and they are very proud to be Asian. It sure would be great, to #StopAsianHate. We got our message across loud and clear!”

Ong’s national costume was made by Filipino fashion designer Arwin Meriales, 22, in just two days. Meriales is still in his penultimate year in fashion school, but already has experience working with beauty pageant contestants. In fact, it was seeing his previous creation for the winner of Miss Grand International 2020 that prompted Ong, who was born in the Philippines, to contact Meriales via Instagram at the end of April.

When he first received the request to design for Miss Universe Singapore, Meriales admitted to feeling a lot of pressure. There were several hurdles in his way: a tight turnaround; having school exams at the same time, being in a different country from Ong; and pandemic restrictions, which made it difficult to go out and buy materials.

“But it is my dream to showcase my designs on the Miss Universe stage, so I knew I needed to do this,” he recounts to Vogue Singapore. “I am also very passionate about creating something new.”

For Ong’s national costume, Meriales, who describes his style as “more avant-garde and couture“, came up with the initial design in two hours: “Bernadette said she wanted the costume to reflect Singapore culture, so I decided to base it on Singapore’s national flag. I got the idea of making the base a bodysuit because I wanted to show off her figure. And Bernadette suggested adding a cape to liven up the outfit.”

However, Meriales felt the cape was still too plain, which was how he got the idea of adding a statement on the back. “I combed through Bernadette’s Facebook page and realised anti-Asian racism was something she’s spoken against quite a bit and feels strongly about. So I suggested putting the words ‘Stop Asian Hate’ on the cape,” Meriales says. And Ong loved it immediately.

Meriales then asked his friend and fellow Filipino, Paulo Espinosa, to hand-paint the words. Espinosa, 24, is a self-taught artist who only started creating art last November. “When Arwin asked me to work on this dress, I accepted without hesitation but with fear,” he recalls. “I was afraid every second of the process because there was only one cape, so if I messed up, it wouldn’t be ready in time.”

Espinosa received the cape from Meriales on April 24 and had to send it back the next morning. However, his day job in the video games industry ended only at 11pm, forcing him to pull an all-nighter to finish the cape in time. All’s well that ends well, but Espinosa’s creative process was far from straightforward.

“Bernadette sent me a sample of the text but I wanted to tweak the typography to make it more impactful on the eye. I did a draft on an old shirt first, and after both Bernadette and Arwin approved it, I started painting on the actual cape and worked until 4am. Afterwards, I dried the paint with an electric fan because I didn’t have a blower,” recounts Espinosa with a laugh.

“It’s an honour to be a part of such a big and meaningful cause,” Espinosa says thoughtfully. “Asian hate is a big issue I care a lot about and I think Bernadette’s costume sent an important message to the whole world.”

Meriales expresses a similar sentiment: “As a fashion designer, my creations are my voice, and I want to use them to make it clear that everyone in the world should respect one another regardless of race.” 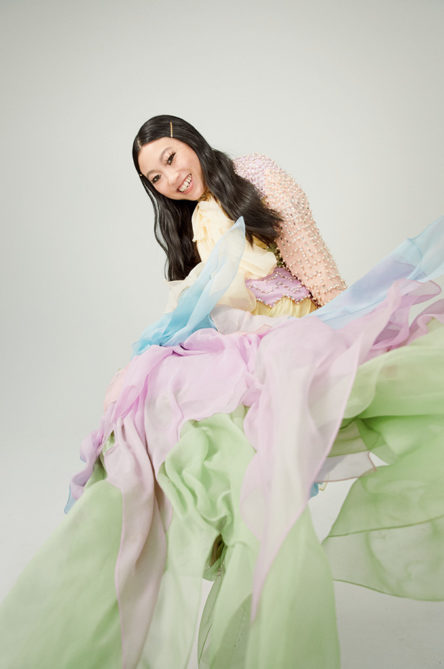 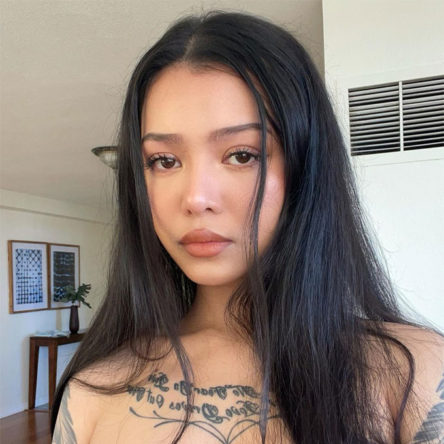 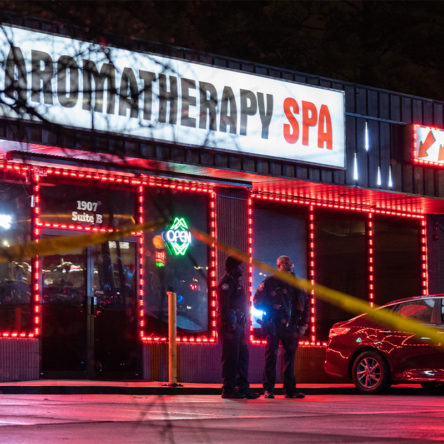