The usual pandemonium outside the Dolce&Gabbana show was cranked up to 11 this afternoon. Three days ago, Kim Kardashian touched down in Milan and posted a pic of herself disembarking a PJ with the hashtags #CiaoKim and #DolceGabbana. The designers have been linked to the Kardashians since this May, when they wardrobed Kim’s sister Kourtney’s wedding to Travis Barker in Portofino. At a press conference this morning, Kim said that today’s collaboration came about when Dolce and Gabbana discovered that the clotheshorse brought her own collection of vintage D&G to the nuptials, including “some pieces that even they didn’t have in their own archives.”

The proposal went something like this: Kardashian would act as curator, selecting pieces from past collections, specifically the 20-year period between 1987 and 2007 (conveniently spanning the Y2K years that are trending at the moment), and the designers would rework those pieces for today, but subtly, so that the links between then and now are obvious enough for the social media audience, where so much of fashion communication plays out in 2022.

The benefits for Dolce&Gabbana are plenty. The Kardashian-Jenners in attendance today boast a combined 652 million followers. As for Kim, hooking up with Dolce&Gabbana doesn’t just burnish her high-fashion image, but thanks to the internet’s capacity to flatten time, it somehow also stretches her influence. She became a household name in 2007 when Keeping Up With the Kardashians started airing, but with this partnership she’s put her stamp on two extra decades. Damn, she’s good at the fame game.

Explaining her affinity for the brand at the press conference, Kardashian said, “Yes, I have this futuristic alien Barbie personality, which I like. But in my soul I feel very sensual Italian mob wife at the same time. I don’t know if that’s appropriate to say.” Of course, Dolce&Gabbana have worked the sensual Italian wife trope to their own ends, as editorials and ad campaigns of D&G favourites from back in the day—including Eva Herzigova and Helena Christensen, who sat in the front row—attest.

On the runway, corsets, wiggle dresses, and lingerie sets were stitched with labels at the hip or wrist identifying the year they were first presented. At the same time, other pieces served Kardashian’s own interests. “It’s very Skims-y,” a seatmate said, nodding at a stretch jersey number circa 1990 and a new one made in its image. For those of you living under a rock, Skims is Kardashian’s $3.2 billion shapewear brand. Presumably, all of this is future content for Hulu’s The Kardashians show, too; season 2 premiered a couple of nights ago.

All the top fashion brands are getting into the entertainment business. Dolce and Gabbana have always been early adopters. With Kim’s help, they just raised the stakes. 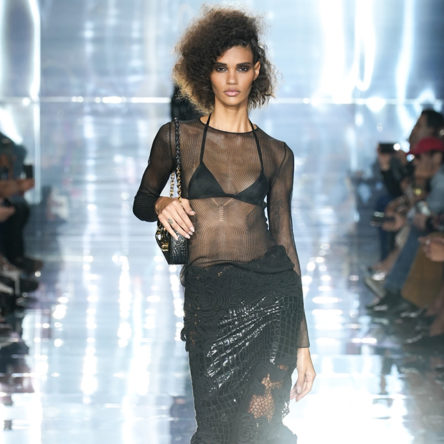 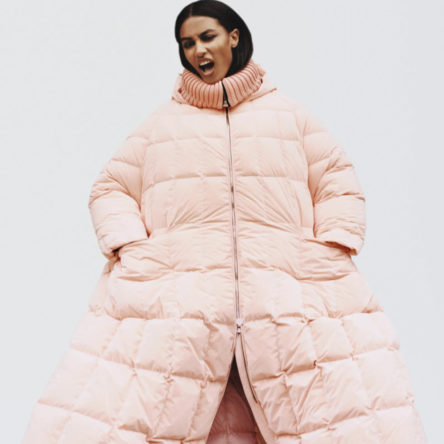