The White Show at Central Saint Martins (CSM) is about to deluge the college’s Instagram page with the work of 150 students at 2pm GMT today. The blizzard of work is a rite of passage—the challenge to design a piece in the same white fabric—the first project to be thrown at college-starters for generations. None before has had to rise to the extra monumental test of courage and ingenuity as the ones who joined in September 2020, though: these students are staging their hurrah of individuality while scattered in digs and parental homes all over the world.

No wild London college parade, no dressing up, no student-bar afterparties—no matter! Refusing to be robbed by the pandemic, this cohort has stepped up with video, performance, interviews and documentaries. Essentially, it’s the resourceful launch of a youth experiment in crossing the new frontiers of fashion communication—exactly the place where the entire fashion industry finds itself now.

Fashion communication and promotion students Macey Kerrigan, Katie Hudson and Aïcha Sommer, all 20 years old, made a digital 3D rendering of the King’s Cross campus, throwing huge images of work by fashion-design friends on the walls. Conceptually, it’s about as advanced as anything a big brand has thrown its money at—made by 20-year-olds on zero budget.

That’s just for starters. Education is changing fast, and the students in it are lightning rods for all the issues that are hitting the world. Central Saint Martins, like universities across the world, has been shaken to its foundations by student protests for the Black Lives Matter movement. Head of college Jeremy Till comments: “Following the death of George Floyd, and the subsequent protests and rightful outrage at the injustices within our society, both UAL (the overarching university organisation) and CSM developed detailed anti-racism plans. These attempted to acknowledge the pain and emotional burden that our students and staff of colour experienced.” In consultation with students and staff, he says, the college is moving towards “diversifying the student and staff body and projects around decolonising the curriculum. We recognise the need to acknowledge past failings.”

Work intersecting racism, colonialism, gender, sexuality, sustainability and states of mental health in isolation roll right through the ‘show’.  Journalism and photography students—practising their editing and team-work skills—divided the show into three themes. They swirl around “the supremacy of digital surveillance”, examining the current reality of  “existing in permanent limbo” and inventing metaphors for a reassessment of how society should be: “An evolution of values, a new beginning, away from the institutional failures and the havoc caused by this year’s pandemic.”

But how to sculpt all that into a few metres of white fabric, while you might only have a pair of scissors and a glue gun at home? Cameron Jukes, an 18-year-old with British-Jamaican heritage shot his look, fused from the loaded history of cotton farming, and his research on Nietzsche, on the banks of the Thames. “I called my grandmother, who is head of the Black church in Nottingham, who told me the history of cotton. It’s tinged with an aura of horror.” He dealt with the idea of cotton bags in his spiralling dress and powered himself with Nietzsche’s concept of the übermensch: “Becoming your own god.” Jukes knows exactly what his purpose is in studying fashion. “The Jamaican side of my family are proud people, who were tailors, who moved to Britain on a false promise, and lost everything,” he says. “I want to restore the respect my family had.”

Gen Z is moving towards a new sense of spirituality. Yodea Marquel Williams, 24, who identifies as Black, British and queer, found their route into that with their first project. Their piece is a vision of their own powerful angel, studied from merging anime, Sumerian art and biblical imagery. They describe their angel as a being “moving between realms, who is non-binary. Because that’s who I am.”

A sharp critique of “British piracy, stolen art and colonialism” came from Dylan Yeung, 20, seen through the lens of his Chinese family heritage in Hong Kong. His broad-shouldered menswear silhouette is based on the uniform of a British sailor who is “smuggling” a bag in the shape of a Ming dynasty vase under his coat. That’s his commentary on the now highly contentious ‘ownership’ of the British Museum treasures, which were extensively looted from China—and every other culture that fell under the domination of the British Empire.

That’s just a taster. Everyone finds their voice equally here. The White Show exercise is a great leveller and also a great elevator. It’s more than individual students figuring out who they want to become through the free-form medium of fashion. Anyone watching it will also pick up clues to exactly how young creative minds are intent on redesigning the future. Pay attention, fashion industry. This is a premonition. 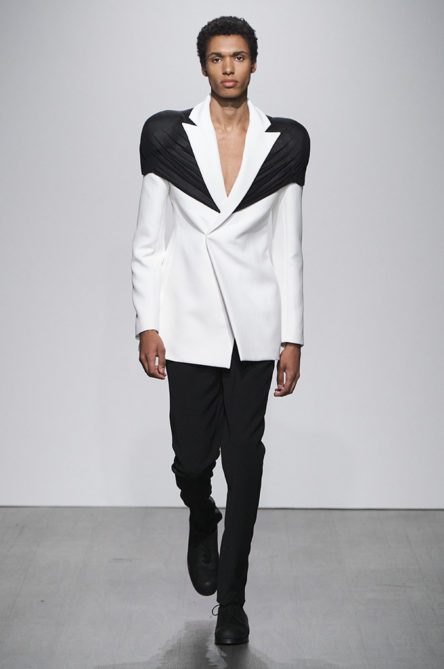 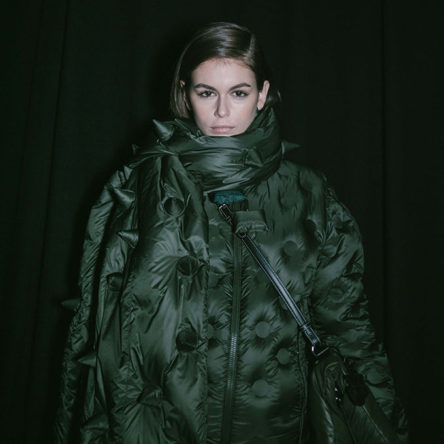