After the final shows wrapped last Tuesday in Paris, it would be fair to assume the endless surprises of this season’s fashion month had reached their conclusion. Not so: One of the most glaring omissions from the Milan schedule, Bottega Veneta, popped up in London for an event at the city’s historic dance venue Sadlers Wells. To keep us further on our toes, initial whispers of the performance came not from within fashion circles or the brand’s press channels, but instead via the impressive lineup of attendees shot by paparazzi on their way into the presentation.

The first to be spotted was the south London rapper Stormzy, who stepped out of his car in a pared-back look that let Daniel Lee’s subtle details do the talking: a simple black tee with a perfectly cut pair of technical nylon trousers, elevated with a leather parka that featured bunched-up, toggled sleeves. The critically-acclaimed, chart-topping grime star is noted for his political advocacy as well as his music. It’s an outlook he’s expressed repeatedly through style, too—memorably as a headliner at last year’s Glastonbury festival, where Stormzy’s stab-proof vest, graffitied by Banksy with the Union Jack flag, served as a powerful statement on justice reform and knife crime in Britain.

Another style-savvy attendee from the world of music was Skepta, the Tottenham-born rapper and producer who shot to fame in the mid-’00s as part of the grime collective Boy Better Know and won the prestigious Mercury Prize for his solo album, Konnichiwa, in 2016. Regularly spotted on the front row at Virgil Abloh’s Louis Vuitton and Kim Jones’s Dior Men shows in Paris, Skepta has never shied away from a bold menswear look. For the event, he wore one of Bottega Veneta’s opulent intrecciato leather coats in black with a red underlayer, to perfectly match his Tire boots that featured a rubber sole in coordinating crimson.

Finally, there was a rare appearance by one of the British music scene’s more quietly influential fashion figures: Neneh Cherry, the legendary singer-songwriter whose 1989 album Raw Like Sushi brought the radical, DIY spirit of stylists Ray Petri and Judy Blame into the mainstream. Cherry’s look included a loose-fitting black blazer and shorts with a bandeau top underneath, but she gave it her signature edge by wearing the brand’s stompy Chelsea boots, a chunky gold chain, and a pyramid bag. Oh, and of course, a face mask in a contrasting shade of dark green.

The details of the night may still be under wraps, and how exactly the Italian house’s spring 2021 collection was shown remains to be seen. But by bringing together a handful of the most agenda-setting talents from British music over the past few decades under one roof, Bottega Veneta has us very much intrigued. 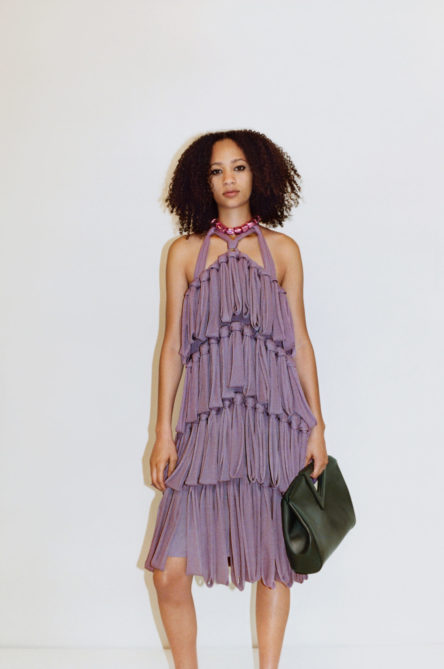 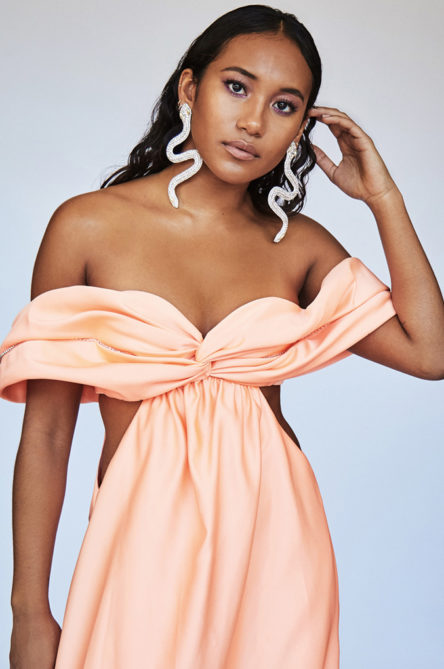