“I have always danced,” says our artist-in-residence Caroline Denervaud.  The Switzerland-born performer and painter studied contemporary dance from London’s Trinity Laban Conservatoire of Music and Dance. A leg injury cut short her training and put a peg in her career as a dancer—or so she thought at that time. In a bid to pick herself and her wounded ego up, she moved to Paris with a friend and decided to pursue a course at Les Beaux Arts and also train in fashion design at Studio Berçot.

Her creations combine her acquired skills in performance and visual arts—movement, music, brush strokes and paint. “This is thanks to a friend 10 years ago who suggested that I film,” she says. “I started to film myself, almost every day—moving, dancing, running… From there came the idea of the trace of my movement. Today I dance, I paint and I film.”

Here, as artist-in-residence of Vogue Singapore’s ‘Grace’ issue, Denervaud talks about her inspirations, her design process, and points out how grace is present all around us. She urges the viewer to stand up and notice its abundance and harness its energy through her performance piece ‘Looking for Grace’.

Where does your inspiration come from?
Very simple things like a rhythm, an emotion, a word….

Tell us about the work you have been doing?
I started showing my work quite late. Instagram helped me to share, although initially I went under a nickname and I never showed my face. Today, however, who I am as a person and an artist are one and the same.

My big break came in 2015, when a friend entrusted me with creating 45 artworks for a hotel. That assignment really reinforced my desire to devote myself entirely to my art and develop it. I think since then I have been working almost every day: creating sets for a fashion show, murals, publications, other projects for hotels and shows in galleries and fairs… I painted at home, often at night when the children were sleeping.

I would like to do a residency abroad, exhibit my work in New York and London in 2022, and give live performances and collaborate with interesting people. I also would like to explore an ever more personal way of combining movement, painting and delve more extensively into videography.

Colours seem to play an important role in your work, tell us about that.
I believe that colours are storytellers; they are symbolical and emotional elements. For instance, you can choose a red if you want to represent energy, whereas a blue can calm you down, and each colour reacts differently when placed next to each other. There are colours that dominate, some that fade away and then sometimes, nothing happens.

For ‘Looking for Grace’, I chose pink and the orange for my canvas and my garment—two colours that are very close, yet very far apart. They merge when passed through black and white but are able to hold their own and coexist in nature. They is no aggressiveness in them, rather they are soft,  reassuring, alive and bright at the same time. Reminds me of sand, fire, a summer sky.

What comes first—music, dance or paint?
My work is very spontaneous in its first part. I choose the size of the canvas and a piece of clothing, I turn on the camera and then I start. It’s like a little performance every time. There is an entrance, an end and the middle part where I let my body move, create a trace.

The second part consists of playing around the trace left on the canvas and composing it in colour—telling the rest of the story while keeping the nature and strength of the trace. The garment I wear is important too as its size, rigidity, cut, all will modify my movements.

What does the word ‘Grace’ mean to you personally?
Grace, to me, is like a divine gift—it’s perfect, subtle, pure, magical… God’s grace is a help, a forgiveness, a love.

It is a kind of subtle beauty, a fine and pure elegance, something that emanates from within. It is gentle—as if suspended in time. There is something uncontrollable in grace. You have to be present and open to see grace. It is ephemeral.

How does ‘Looking for Grace’ interpret the concept of  grace?
I wanted it to be an immersion—from the concept to the colours and execution. I prepared three canvases that I fixed to the wall and to the ground—as the stage and background for my performance. My pink and orange garment was deliberately chosen as it is graphic yet feminine, allowing me to meld yet standout from the background.

The entire performance is a play between verticality and horizontality. This time around, I chose to leave the trace as is and not build it up to a painting. My body, garment and the background dictate the form and structure. Here, the starting impulse is ‘grace’ and its presence everywhere, which I want the viewer to build upon.

Grace is uncontrollable, but you have to be present and open to see it.

What do you want people to take away from your artwork process?
I want my art to carry them away from their reality, to help them dream and get caught up in a story. I am happy if my art can be a source of reverie, the start of a reflection or a conversation, the return to a memory or a moment. My art is just a proposition. I leave the viewers the possibility of doing or feeling something about it.

This Seoul-based painter uses vintage Dior as her canvas 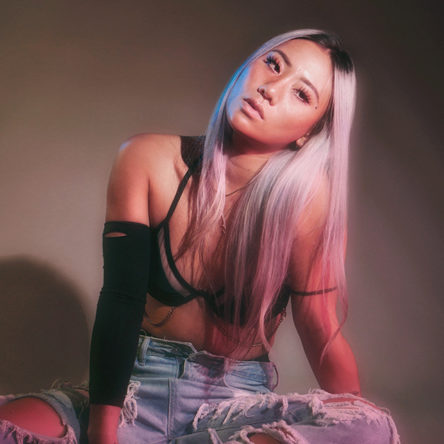 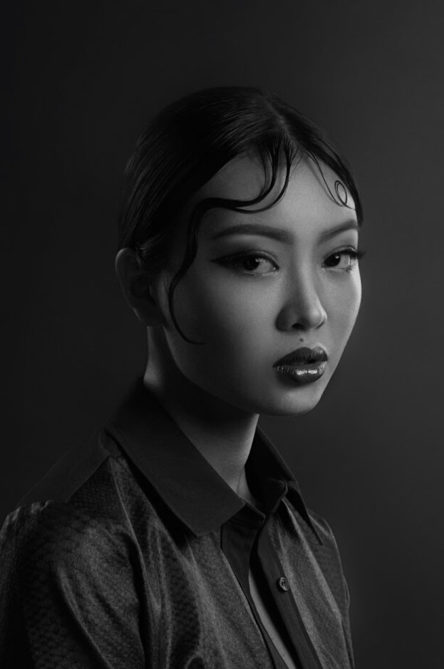 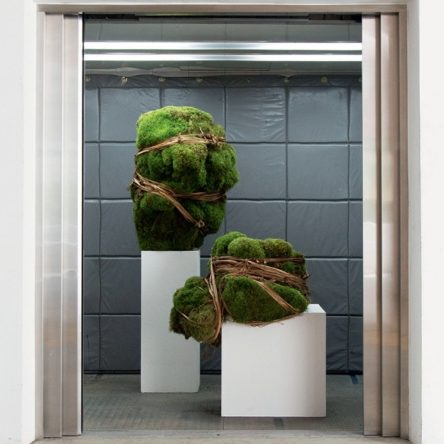