You may want to brace yourself: Victoria Beckham is making the case for bringing back extreme colour-blocking. Spotted today in New York, the designer and former Spice Girl hit the streets wearing a bright, colourful look—and subtle it was not. The star fused neon-bright hues together in a colour combination rarely seen since 2013.

In case you forgot, colour-blocking gained major legs back in the early 2010s, when labels such as Raf Simons, Prada, and Gucci began showcasing runway looks that mixed shades like bright yellow and purple together. Beckham herself even experimented with colour-blocking in her label’s fall and spring 2012 collections—albeit in more muted tones. Wearing Crayola-bright pieces in one outfit was a fad that burned bright, but fast. The look went out of style after a few seasons. However, it’s slowly making a comeback, as seen on the runways at Louis Vuitton, Valentino, and Bottega this season—and Beckham seems to be in favour of the movement.

For her own chic take on the trend, Beckham wore a red top with bright yellow trousers, both from her own label. She then finished off the bold ensemble with a bright green Bottega Veneta Cassette bag. The trio of primary colours made her look like she stepped right out of 2011, though the outfit’s sleek proportions helped modernise it. Are you ready for the return of in-your-face colours? Perhaps channel her energy and think about incorporating one—maybe two—zingy colours into your look. Three, if you dare. 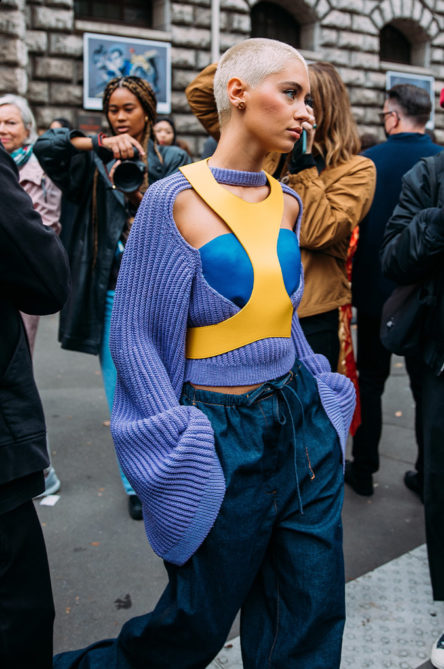