In Rosamund Pike’s latest role, the Hollywood regular and Oscar-nominated star of ‘Gone Girl’ (2014) plays a self-proclaimed lioness. It’s a performance that reminds you of the 42-year-old Londoner’s feature debut, as a cold-hearted publicist who goes toe-to-toe with James Bond in ‘Die Another Day’ (2002), but is a far cry from many of the parts we’ve seen her embody since: the sweet Jane Bennet in ‘Pride & Prejudice’ (2005), a clueless socialite in ‘An Education’ (2009), the heroic reporter Marie Colvin in ‘A Private War’ (2018) and a frustrated wife going to therapy in the TV series ‘State of the Union’ (2019), which earned the actor an Emmy Award.

Now, she’s Marla Grayson in J Blakeson’s pitch-black comedy ‘I Care A Lot’, an impeccably dressed and deeply sadistic court-appointed professional guardian who has gotten rich by stealing from her elderly wards. Aided by her lover and business partner Fran (Eiza González), Marla has amassed an impressive portfolio when she sets her sights on Jennifer Peterson (Dianne Wiest), a retiree with savings, no living family and a spotty medical record. However, after they move her to a retirement home, one of her powerful friends (Peter Dinklage) hatches a plan to free her and destroy Marla.

Fresh from her Golden Globe nomination for Best Actress in a Motion Picture: Musical or Comedy and ahead of the film’s release on 19 February, we spoke to Pike about her meticulous styling, how spin class helped her get into character and why she never worries about being second choice.

Congratulations on your Golden Globe nomination. I saw that you missed the announcement because you were in a recording studio for six hours. How did it feel when you heard the news?
Extraordinary! Ironically, I’ve often missed very significant announcements in my professional life. I won an Emmy when I was on a plane and I was away without a mobile phone when I was offered the Bond film. It’s been a bit of a running theme [laughs]. I was so immersed in what I was working on that it wasn’t even on my radar. I was completely blindsided and it was thrilling.

When did you first meet ‘I Care A Lot’’s director J Blakeson and what did you think of his idea?
J [had the idea] after seeing an article [about wards being exploited by guardians] and thinking: ‘This should be a film, but if I tell the story from the victim’s point of view, it’ll be unbearably awful. What if I tell it from the perpetrator’s point of view?’ I read [his] script and told him, ‘This is the most exciting female character I’ve read in years.’ He replied, ‘I’ve always liked your work. Let’s have dinner.’ Five or six months after that, I was offered the film. It makes you think you’re probably not his first choice [laughs], but I’ve never been scared of being second or third choice. In this business, you can’t have any pride about stuff like that. You have to seize the opportunities.

What was it about Marla Grayson as a character that most intrigued you?
I didn’t understand her or what was motivating her and that’s what I found so riveting. My exploration of the character was about digging into [her until] I could own her appetites—her unabashed hunger for wealth, power and all the things I don’t care about. Marla thinks: ‘I’ve been screwed and so now I’m going to play dirty.’ The thing is, the system is set up for people to play dirty. J wrote a satire about the American dream and the welfare, legal and healthcare systems.

“I’ve never been scared of being second or third choice. In this business, you can’t have any pride about stuff like that”

Marla is defined by her bob, sharp suits and heels. How did that look come together?
I wanted the bob to be razor-sharp. The hairstylist I worked with also cut Amy’s [Pike’s character in 2014’s Gone Girl] bob. Then, as soon as I put on that teal suit she wears in the scene with the lawyer, we knew we’d found her. J said, ‘I want to see those suits in every colour and cut.’ She wears a yellow suit when you see her as the lioness approaching her prey [Jennifer] and then J wanted another yellow suit in the latter part of the film when Marla becomes the prey. Her look is part of her artifice. We wanted to take time [to look at everything] and you don’t really have that time on a small-budget movie. We were racing to change her nails to go with her outfits because I knew Marla would do it. People said, ‘Is this necessary?’ and I said, ‘It might pay off in the end.’

I read that to prepare for the film, you listened to TED Talks by Elizabeth Holmes (a healthcare company CEO who was criminally charged with fraud in June 2018). Is that true?
I did. I was thinking about getting people on your side and the art of selling—selling something that might be totally morally bankrupt, but that people would buy. I didn’t base Marla on Elizabeth, but I was looking for smaller things such as body language and eyelid movements. There’s also her sincerity and Marla playing with that idea is interesting. In court, her arguments are watertight and she’s very reasonable. She says, ‘You can’t care for someone by doing what they want. You have to do what they need and I can care better than a family member.’ You think, ‘I see what you mean.’

You also posted on Instagram about the training that was required. How difficult was that?
I had to be strong for the film because we had an underwater sequence that would be a test of my stamina. That was all me in a tank for two days. The other thing was spin class. [Marla goes to one in] one of the earlier scenes and I’d never done it before. You’re on the bike in a hunkered-down position with your shoulders up and it’s very predatory. It gave me a different physicality.

Also key to Marla’s character is her relationship with her partner in crime, Fran, played by Eiza González. Was it important to you that their love story is presented so matter of factly?
It’s not a plot point, nothing happens to them as a direct result of it and I think that’s how we should see relationships. Just as we might see a lead character with kids and a husband in the background and [assume] that’s her family life, this is Marla’s family life and it’s handled just as nonchalantly. We had a backstory for Fran as having been a bail bondsman in the past, so she has experience with the cops. Plus, Eiza was such a ray of light—so funny and fun to work with. She has a different look [in this film compared to what we’ve seen before] and it was really hot.

What was it like for you to have the film premiere at the Toronto International Film Festival last September and get rave reviews without being able to attend in person?
I haven’t seen this film with an audience. J and I promised each other that one day we will rent a cinema and have our friends watch it together. I’d have relished seeing the world meet Marla, but we did get lovely reviews and I think people needed something a bit unsavoury and the chance to escape into a world that wasn’t earnest or serious. They could laugh at something awful instead of commiserating with one another over the awfulness that we’ve all witnessed over the last year.

Up next, we’ll see you in the fantasy series ‘The Wheel of Time’. How much can you tell us?
It’s a world that I can’t wait for people to see—one where women hold the power and create a new status quo. There’s real diversity in it and it’s [a show] that I hope everyone will respond to.

You’ve been in Prague, where ‘The Wheel of Time’ was being filmed, with your partner and sons for the last year of lockdown. What has it been like to spend this period of time in a new place?
We’ve enjoyed exploring Prague in its emptiness. That’s also been upsetting because so many businesses have struggled, but the city itself is still magical. We feel lucky to be in central Europe, [though] I wish we had other family members here with us. Since Brexit, England feels more remote because even the post [from home] doesn’t come as quickly. It’s actually quite startling. 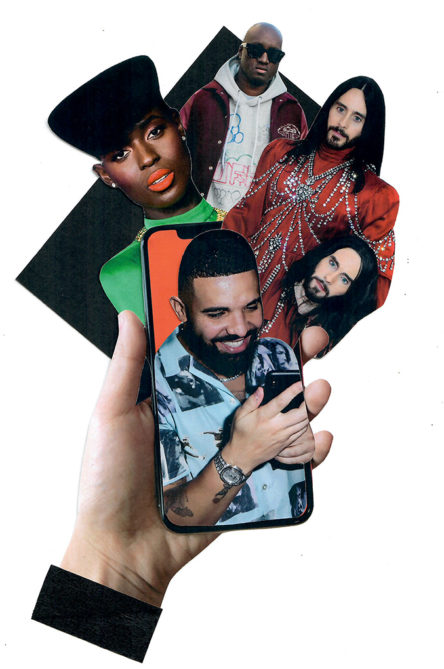 With Drake, Oprah Winfrey and Virgil Abloh as fans, here’s everything you need to know about Clubhouse