It is the end of the summer on the Lido in Venice. Soon the local sun-worshippers will be displaced by movie stars visiting the cinema for the debuts of their films during the International Film Festival. Across the street from the movie theatre, at the Excelsior Hotel where during the days of La Dolce Vita the Mastroiannis and Bardots would do their press days on the beach, one of the Lido locals registers this change in seasons as a turn in priorities. “Everyone goes from ‘Hello, Mister Owens; How are you Mister Owens,’ to, ‘Who are you again?’”

He’s kidding, but even Rick Owens, who has made a home here for himself and brought worldwide attention to this long land spit on the Adriatic end of the Venetian lagoon, showing his last four collections here during the pandemic, does not quite receive the same deference during the film festival as does, say, Mister Clooney. Not that he is here for the attention.

In 2014, Owens bought a condominium apartment on the top floor of a building just a few blocks from the Excelsior and proceeded to renovate it into a beach house version of Superman’s fortress of solitude. The 1970s aquamarine ceramic floor tiles were soon replaced by broad panels of Sicilian white stone, the kitchen was downsized to a fridge and espresso maker to make room for a gym, and the bathrooms were covered in a brooding onyx-colored marble. Basically, all that remains of the old apartment is the view—360 degrees of the sea and the lagoon and Venice itself—from the wide, wraparound marble terrace.

In the open living-, dining-room, den and office area, a bust of Filipo Tommaso Marinetti, the founder of the Futurist movement, made by Thayaht (who also invented the jumpsuit) presides over conversations, reading and work—a kind of modest momento mori, as Owens describes it. “I’ve always been kind of fascinated by that whole movement,” he says, “because, at the beginning, the Italian Futurist movement was utopian. And, in any kind of utopian movement, the intentions are always honorable at the beginnings, and then they degenerate.” Another futurist bust, by Renato Bertelli, sits on the counter of the master bath. “It’s the story of life,” Owens says, “of aspiration, and failure and renewal. I think of [the busts] as skulls, memento mori, to remind you that all is vanity.”

I tease Owens that, while it is easy to mistake the all-mirror gym in the apartment as a kind of church of vanity, it is precisely the opposite. “You see every flaw,” he says, agreeing with a smile, as if he has any flaws to see. Working out here every day, Owens is in what he considers to be the best shape of his life—which is saying something. But if his dedication to the weights and his work regime seems severe, his intentions during his summers in this apartment are anything but. He comes here to play, to lie on the beach and bask in the balmy, placid sea, to read and dream and make plans—and, you know, play dress up in a silk chiffon cape, obviously.

So maybe this apartment, inspired in large part by Le Corbusier’s beach house Cabanon, is less fortress than it is a frame for Owens. Maybe the austere, all-marble-everything structure does help to keep out the noise and the distractions, but it also makes for a canvas on which to drape a beautifully lived life.

An urn and brazier by Rick Owens atop the Sicilian stone bench in Owens’s master bath.

Abs by Rick Owens, on the terrace.

A plaque of Michele Lamy’s artistic endeavor Lamyland sits on the bookshelves amid piles of artist monographs and biographies.

A futuristic bust by Renato Bertelli in the master bath overlooking the terrace and the sea.

Owens, at Superhero-level physical fitness, takes a late afternoon dip in the Adriatic.

Everything is a runway—especially in a cape. 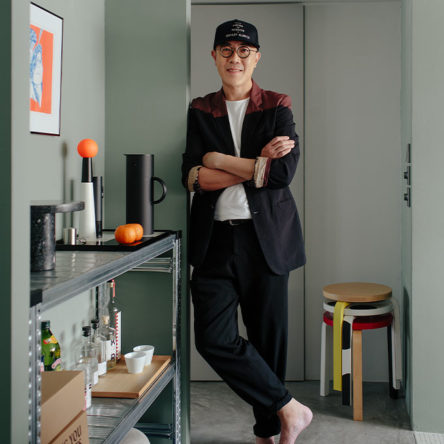