For Prada’s spring/summer 2022 men’s collection, Miuccia Prada and Raf Simons explored a “utopia of normality” on a Mediterranean beach: a summer holiday paradise we took for granted not long ago, but which seems so close and yet so far away at this stage in the pandemic, says Anders Christian Madsen. Below, five things to know about the show.

The film took place on a beach

“Tunnel to joy, urgency of feelings, utopia of normality,” read the Prada press release—and that was all, folks. In a post-pandemic time that has us all asking the same questions—every answer a banality—maybe it’s better to just sit tight and be quiet. Miuccia Prada and Raf Simons’s proposal for that near future, however, was crystal clear. The film took models through the science fiction corridors we’ve seen in previous films following Simons’s arrival. But suddenly, they found light at the end of the tunnel. Prada’s “utopia of normality”, it turns out, is a Mediterranean beach: a summer holiday paradise we took for granted not long ago, but which seems so close and yet so far away at this stage in the pandemic.

The collection was free and easy

The “urgency of feelings” the designers were referring to was expressed in a wardrobe that felt freer and easier than their previous collaborations. The erogenous zone—there’s always one in a Prada collection—was a knitted short-short with a tight kilt pulled over it, like something out of Dickie Greenleaf’s swimwear collection, but with added subversion. A stripy romper only increased that value, suspended between an Edwardian man’s swimming costume and a cool kid’s holiday look. There was an air of fetish to those pieces enhanced by the confrontational lustre of skinnified yellow slickers with a matching sou’wester-type bucket hat, or vinyl coats that felt irresistibly inappropriate for summer.

At times, the collection had a summertime innocence about it, placed somewhere between romanticism and melancholy. A leather jacket was made to look old and faded, as if the sun of summers past had bleached it. Tufted floral hoodies had a paleness to them, like an old beach towel washed-out by sea salt and sand. Knitted sailor-like front-and-back bibs were childlike, like a ’50s kid on holiday. If Prada and Simons were conveying the wistfulness of our moment in time, it was a job well done.

There were styling tricks aplenty

For all the uncertainty that remains, one thing is for sure: we are ready to shop again, and nothing tempts a retail heart like the type of styling-centric accessories Prada and Simons excel in. This collection had plenty of them, from those bucket hats to the knitted bibs, the big shoulder bags, and the floral-embellished Oxford shoes paired with an ankle sock.

The film was food for thought

Watching these young men frolic in the azure sea and sunbathe on rocks, there was something—no doubt intentionally—clichéd about the orchestration. The picture-perfect postcard situations we rolled our eyes at in the past have suddenly become our biggest dreams. Was Prada and Simons’s idyll a sly backhand to our simple desires? After a year of big debates and climate plans and true-life makeovers, there’s a certain irony to us all getting back on a flight to soak up the sun in an alternate holiday dimension. But, after all, we are only human. 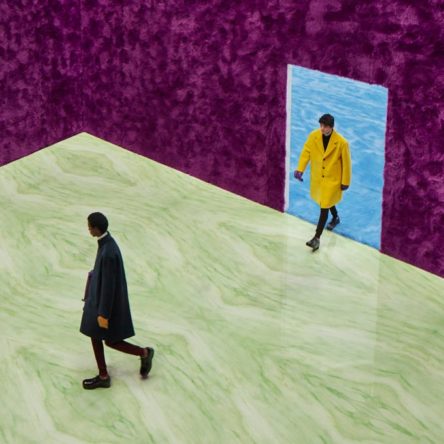