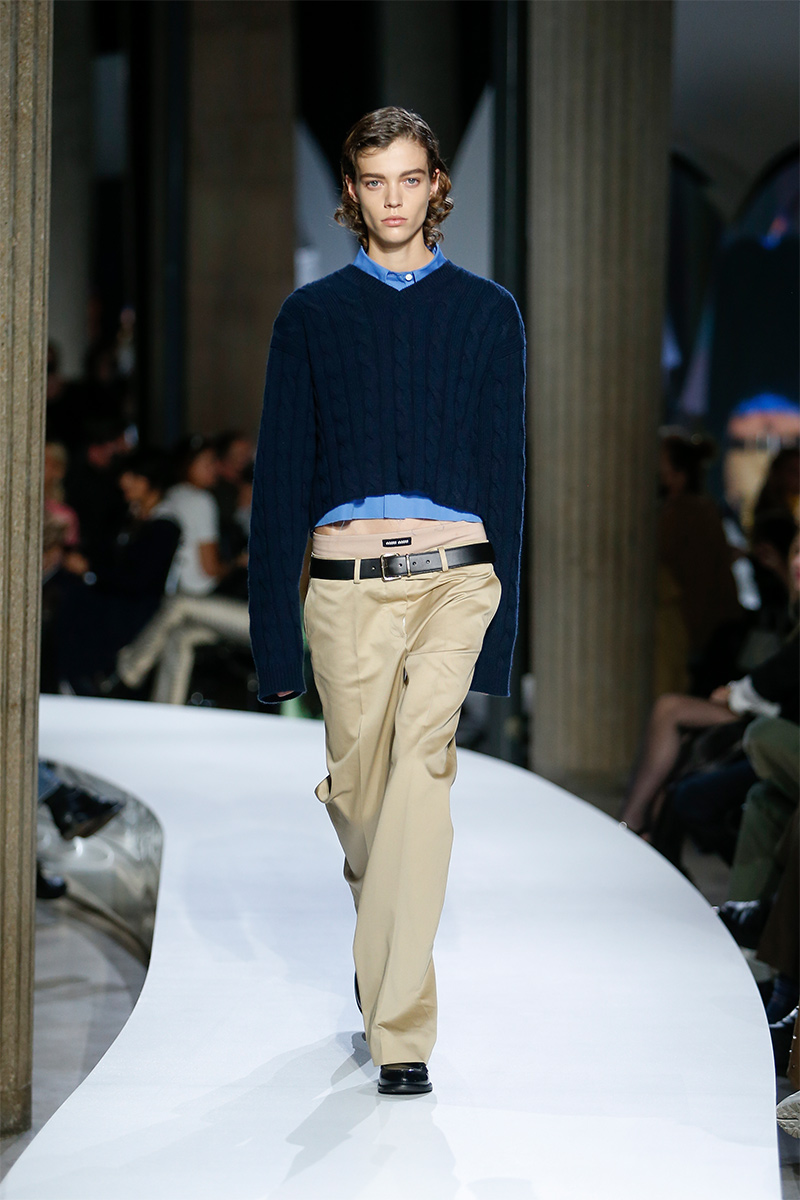 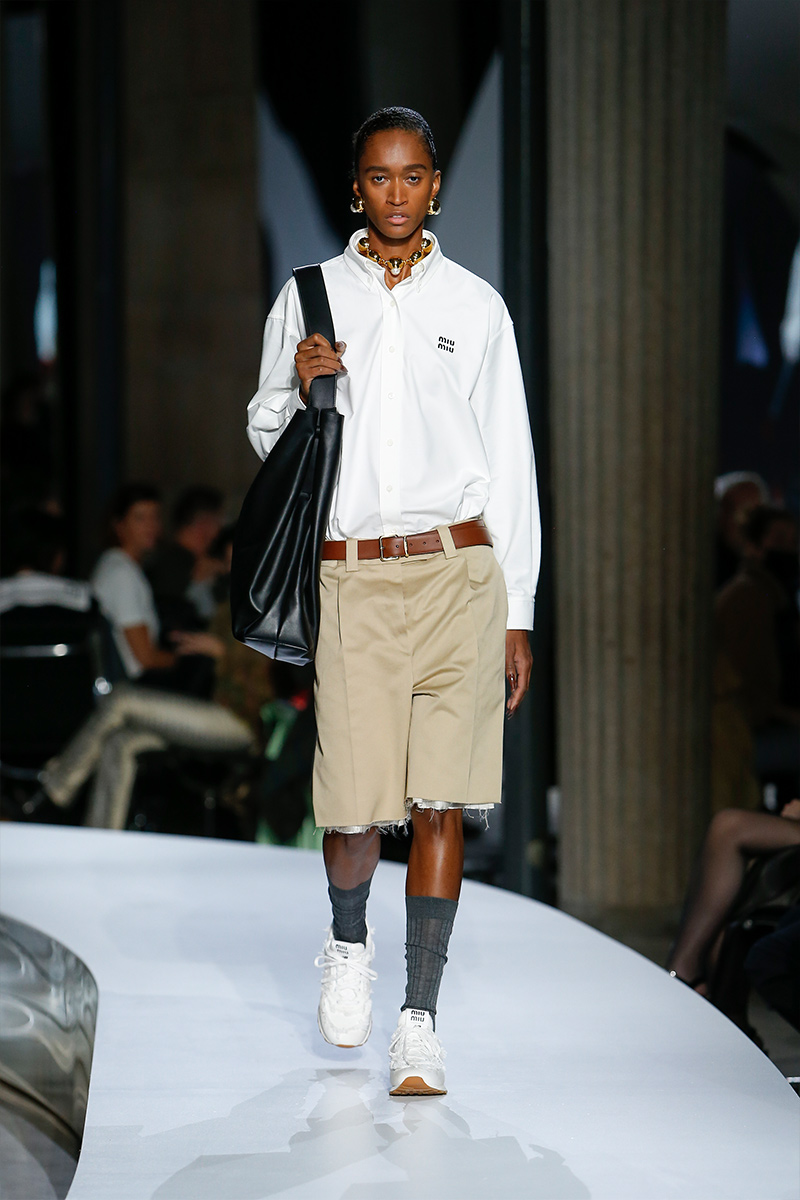 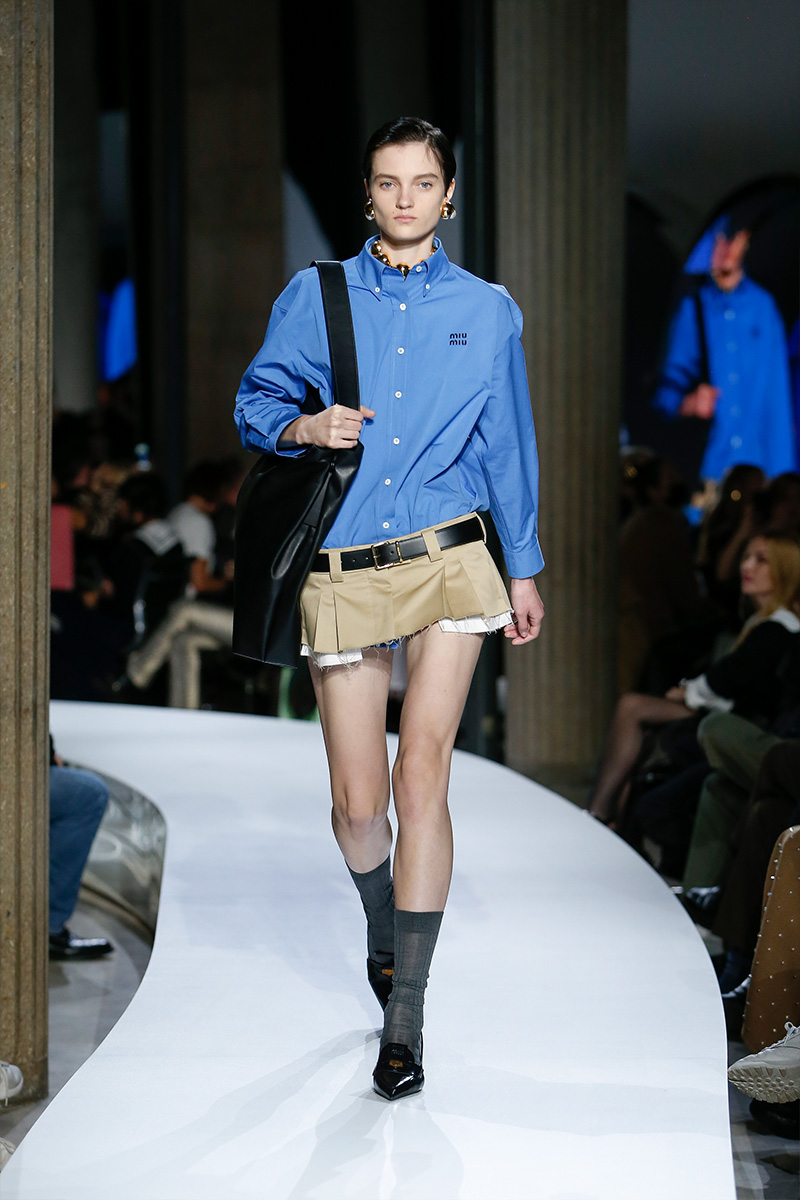 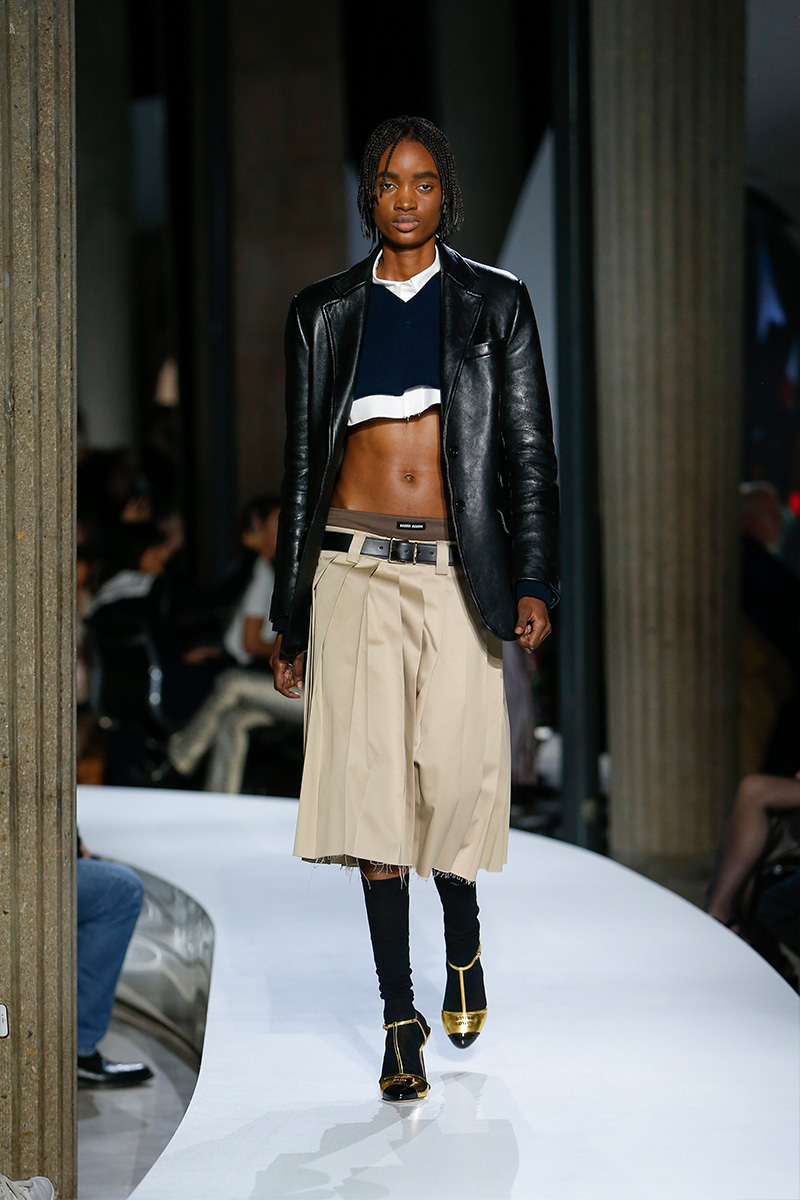 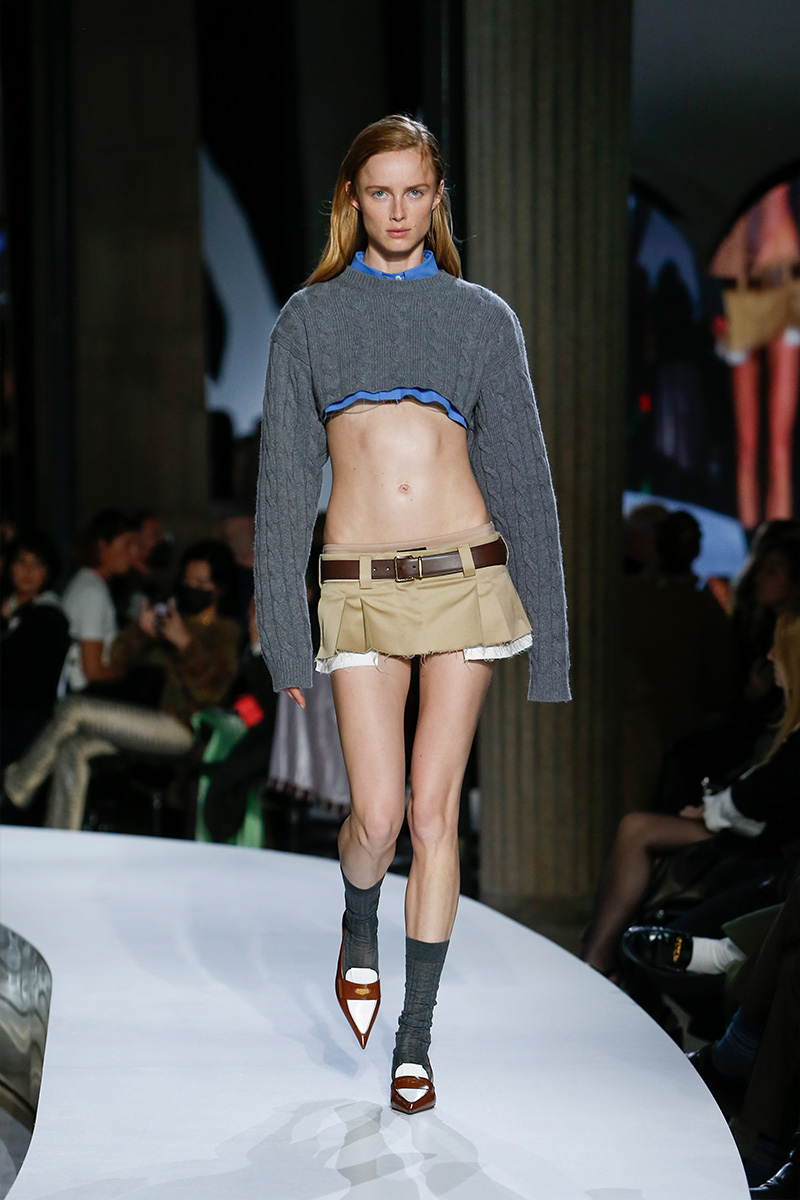 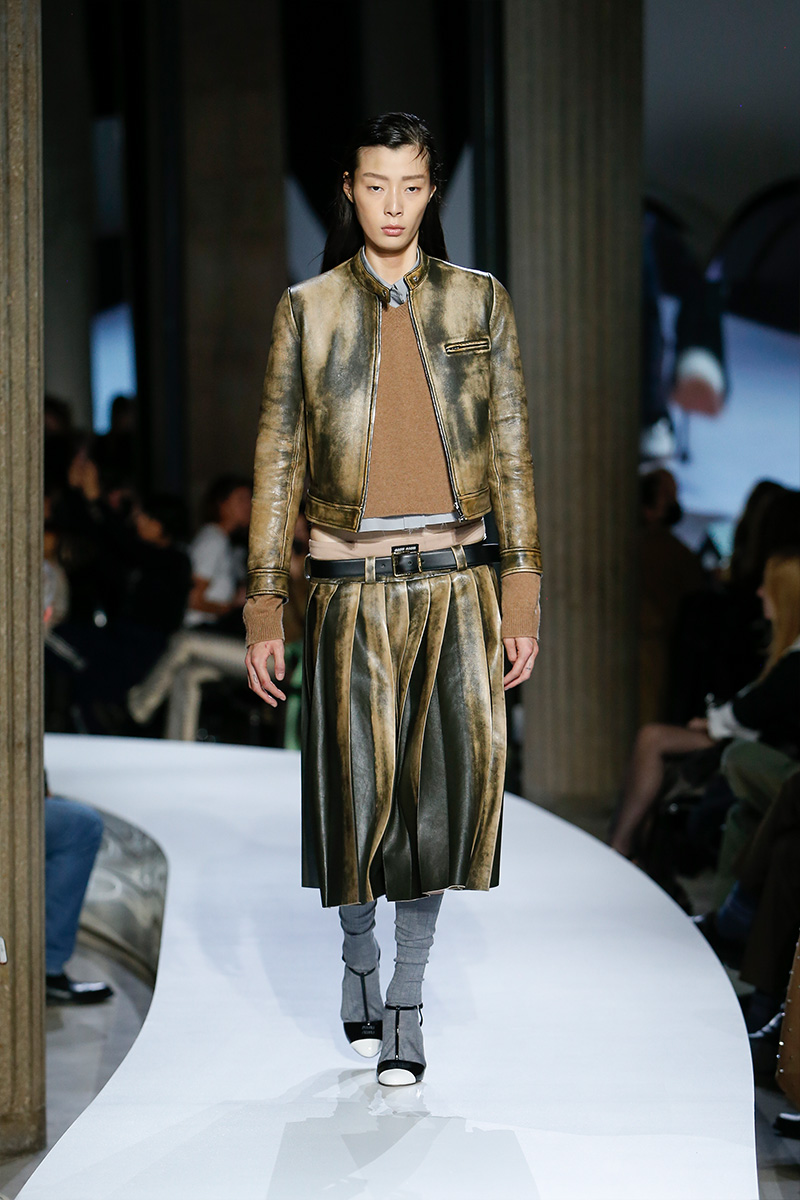 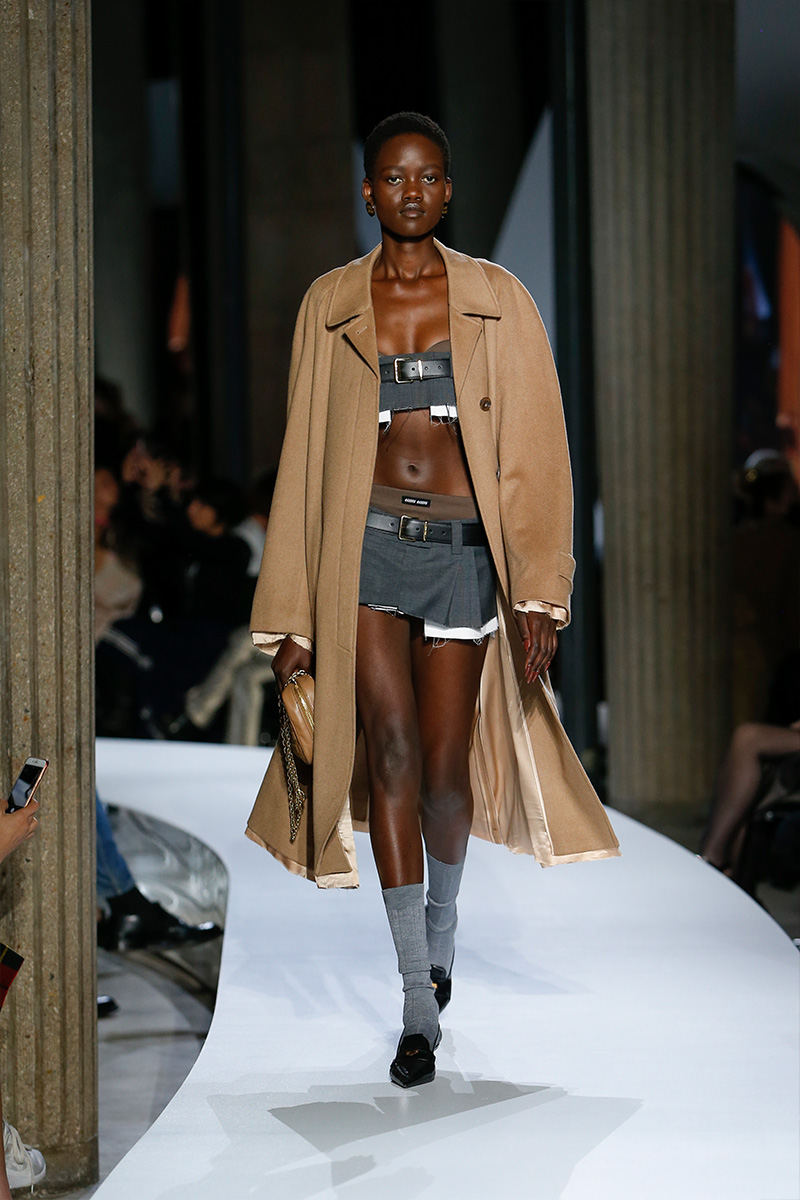 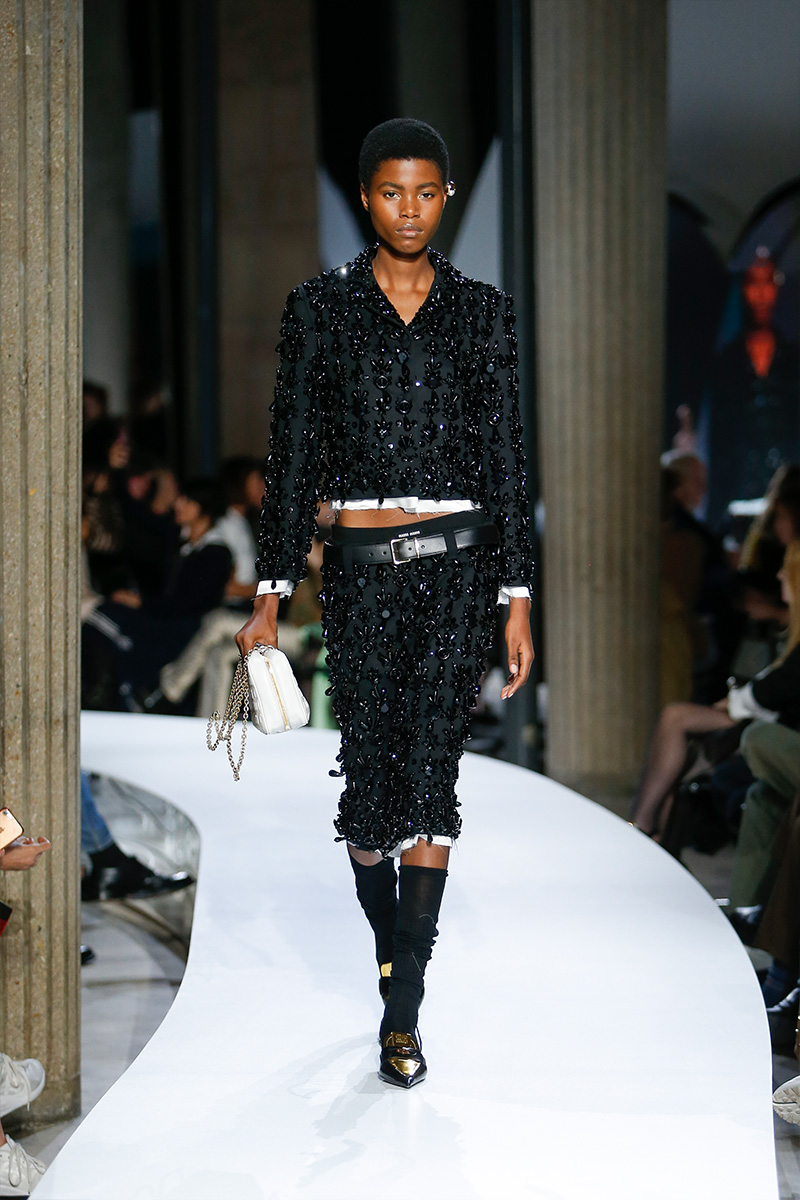 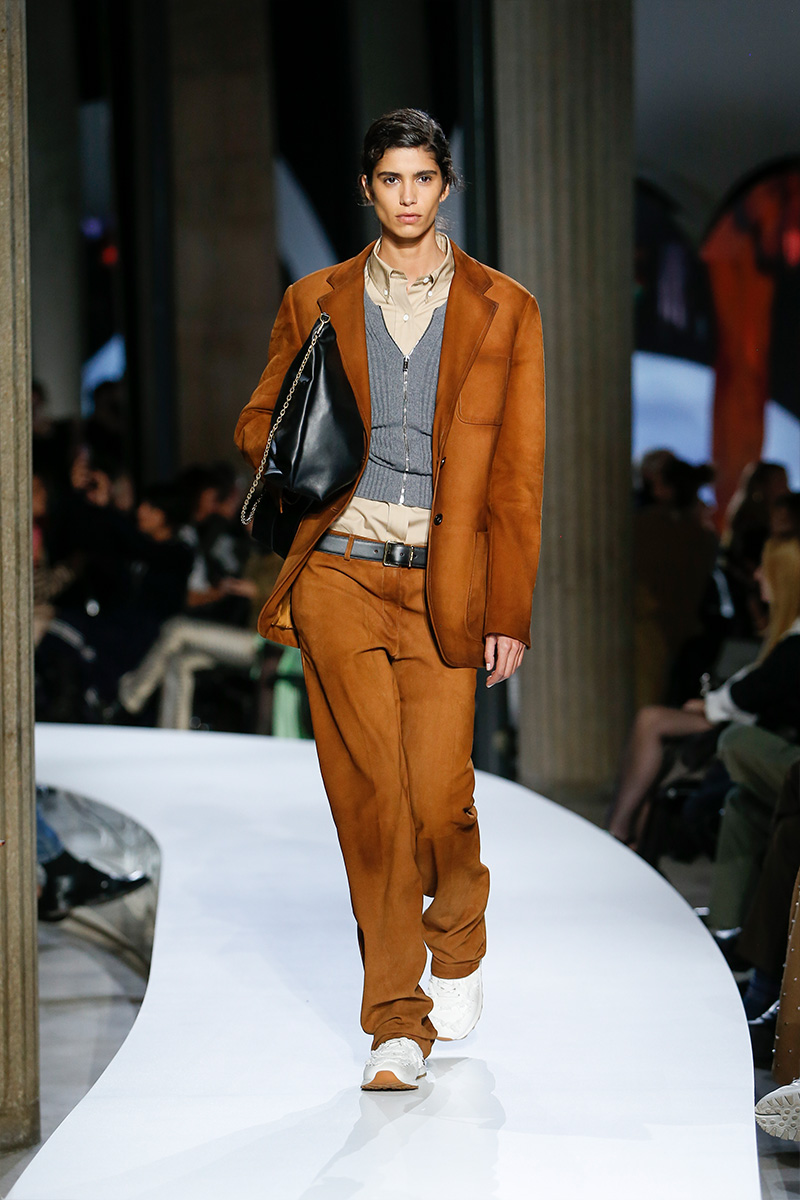 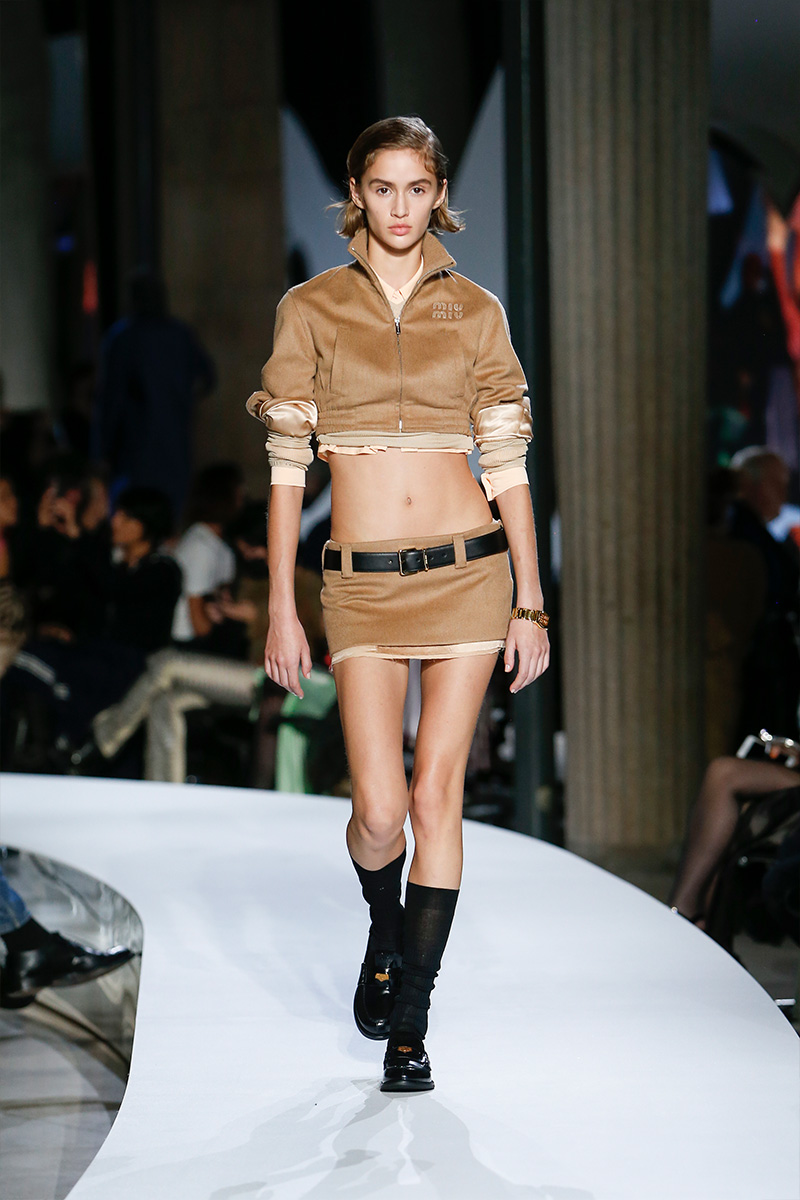 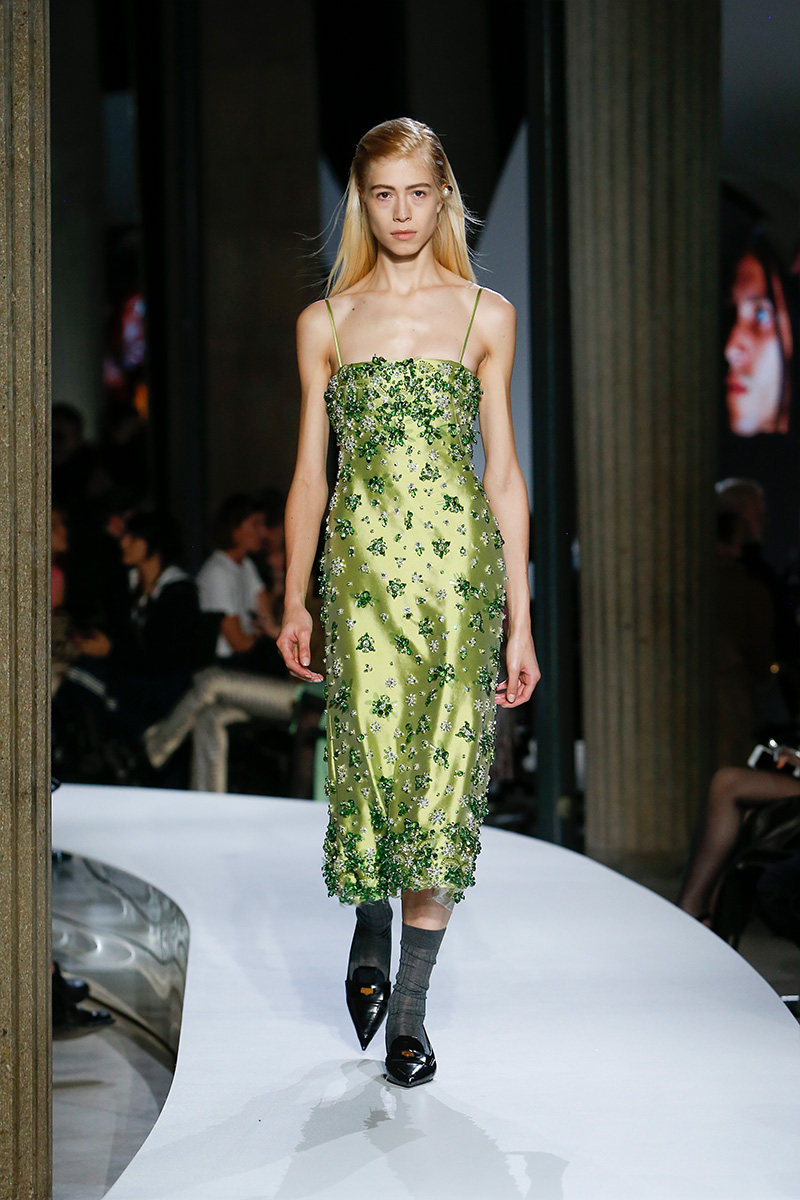 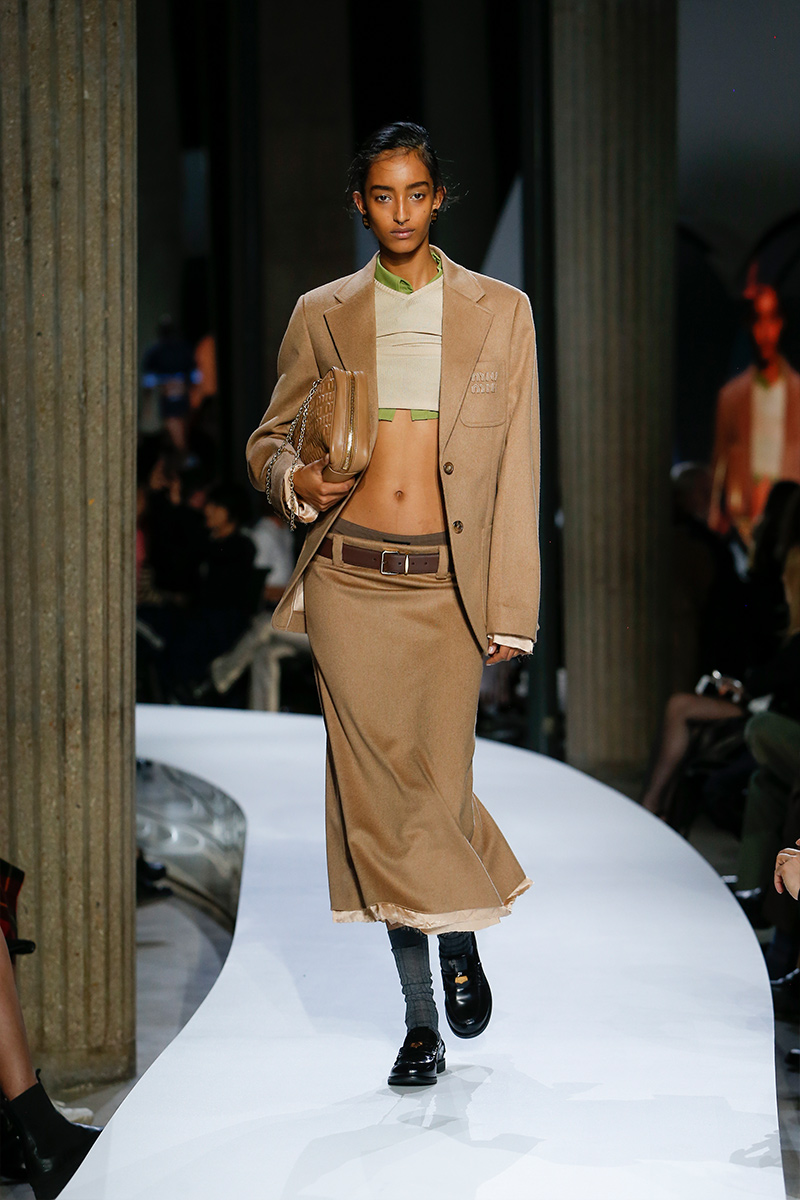 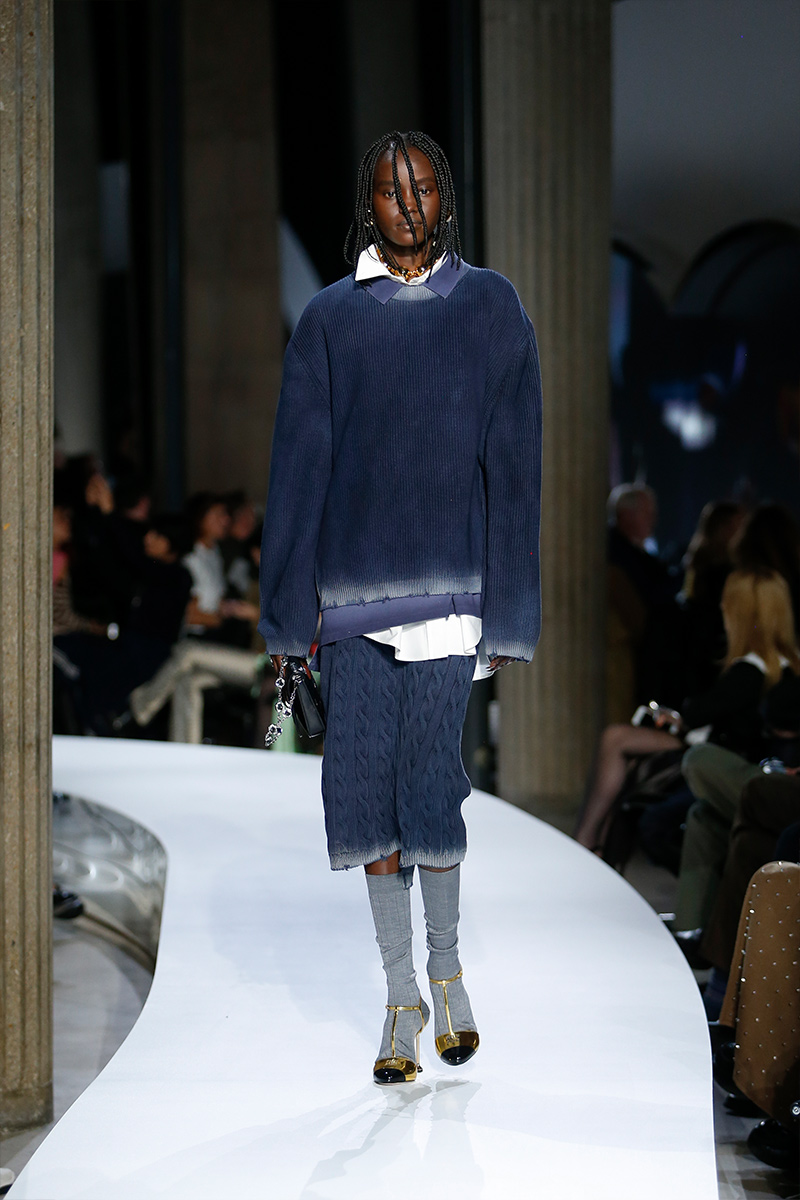 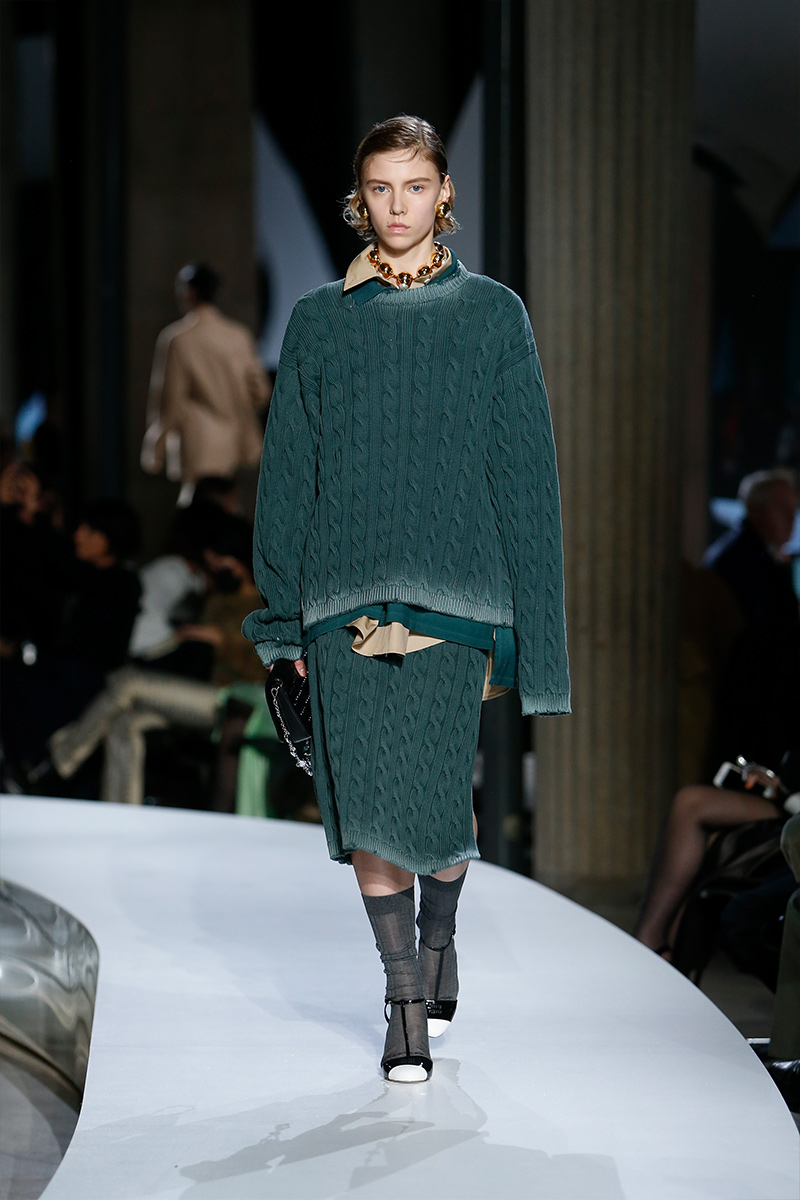 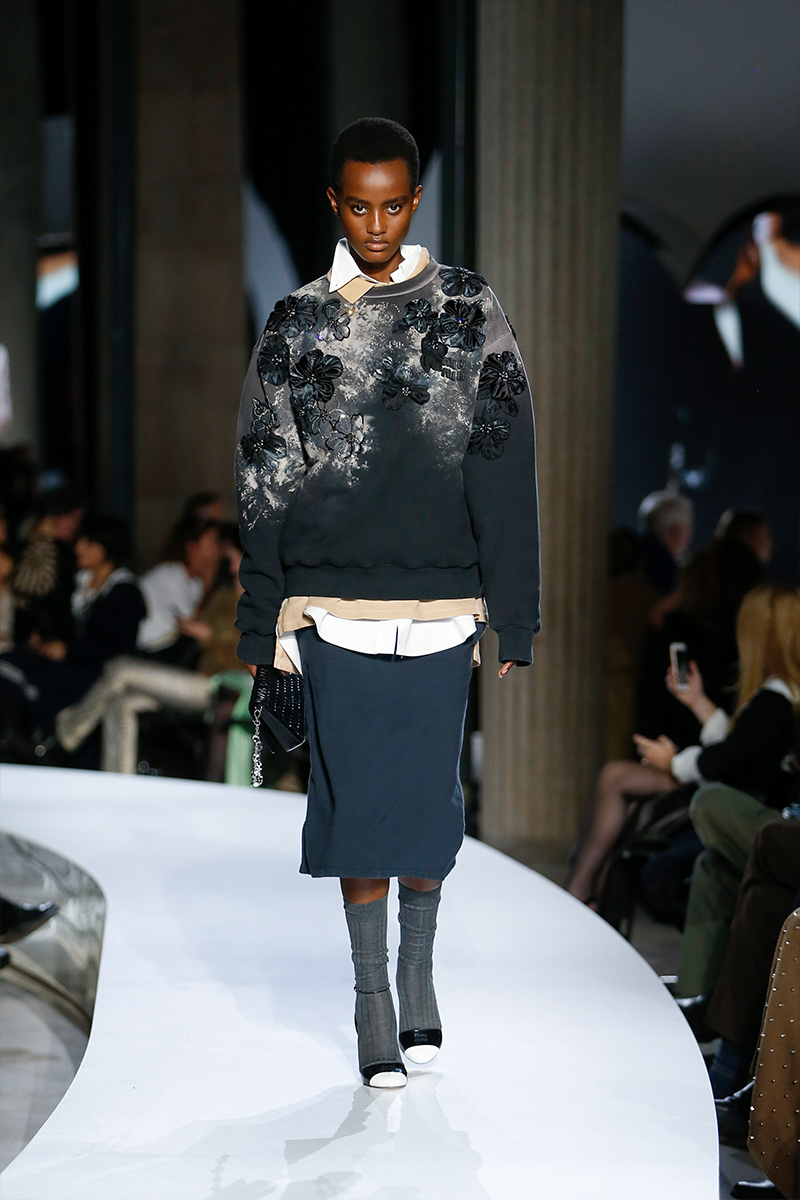 Imagine being in your mid-twenties when the pandemic hit, just about to make your debut on the corporate scene; your pressed skirt suit, ironed shirt and unwrapped nylons left abandoned in your closet for what felt like an eternity. When the world reopens and WFH is replaced with IRL, will you pull out that dusty uniform as if nothing happened? Or did something change within you? For Miuccia Prada’s Miu Miu customer of the 2020s, it’s a no-brainer. When it comes to the age groups whose formative experiences were interrupted by the lockdown period, continuing on the same track as the generations before them is no longer a given.

If the seismic events of the last year-and-a-half taught young people anything, it’s to question those values, norms, and, indeed, dress codes. When the Miu Miu woman returns to the office, she’s chopping up all of those preordained rules, quite literally. Today, Prada marked her own return to the office—i.e. the Palais d’Iéna where the Miu Miu show traditionally takes place—by seating her guests in ergonomic work chairs and treating us to a back-to-work wardrobe for the post-pandemic age. Like rebellious private school kids cutting up their uniforms, she shortened the length of corporate skirts and tops—frayed edges in tow—until there was barely anything left to crop.

It was as if waistlines and skirt hems—and necklines and top hems—had a magnetic attraction to one another, drawing ever closer as the show progressed. Midriffs were elongated to a degree that would have made Jessica Simpson, Britney Spears and Christina Aguilera collectively blush in the early 2000s, if, of course, the very sight of those low-riding baggy trousers wouldn’t have made them faint first. In the process, miniskirts migrated into top territory and morphed into belted bandeaus, and someone came to work in just a beige bra and a matching pencil skirt, the elastic band of her underwear poking out. All this, mind you, in the fabrics of a businesswoman’s wardrobe.

It was a kind of normcore for an abnormal world. Prada hasn’t been doing post-show interviews this season due to Covid-19, but she did grace us with a few well-chosen words: “It’s so normal, but for me it’s so strange. Strange is not strange anymore,” she said with a shrug, and toiled on with her celebrity greetings. Certainly the new generations seem unfazed by the overt sexiness of the post-lockdown mentality. Forget about Casual Fridays—in 2022, it’s all about Freaky Fridays, and Karen from IT Support has rolled up her merino jumper so you can see her six-pack.

In case there are any apprehensive dressers left in this ‘new sexy’ climate, Prada did throw in some very viable new alternatives to the corporate wardrobe. Cable knit skirts with high slits worn with shirts and faded oversized knits made for a realistic take on ‘the generational suit,’ as did a stone-washed leather blouson with a matching box-pleat skirt. And should those Freaky Fridays ever turn into Formal Fridays—gosh, how archaic—the chopped and tattered idea of it all was applied to some lavishly embellished dresses and suits rendered in the most beautiful smoky palette.

Prada’s winding white runway was lined with lens-shaped screens on which two comedy pieces directed by the Moroccan artist Meriem Bennani were shown. One saw a businesswoman surreally arguing with documents that had come to life (“May God curse you with the sharpest scissors!”). Another was an amusing conversation between Moroccan women making fun of the latest trends in plastic surgery (“They take fat from the thighs and inject it in the butt”—“OK, so it’s Halal!”). What was it Prada said? “Strange is not strange anymore.” 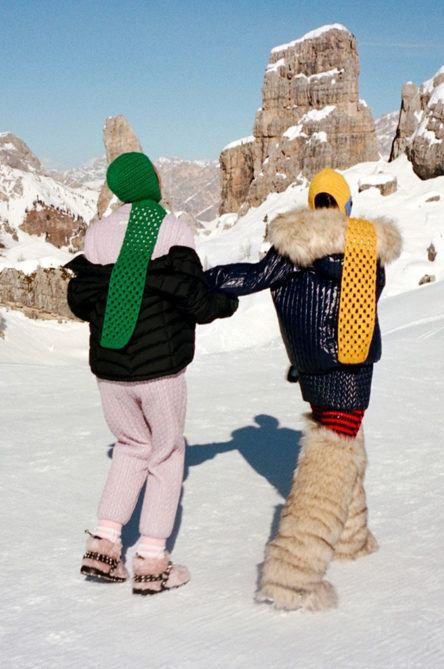 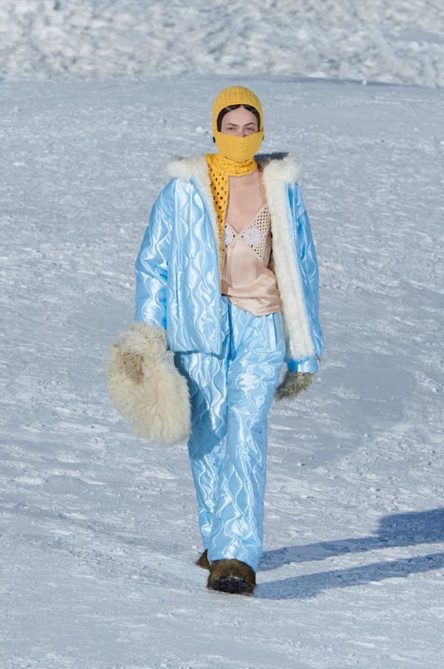 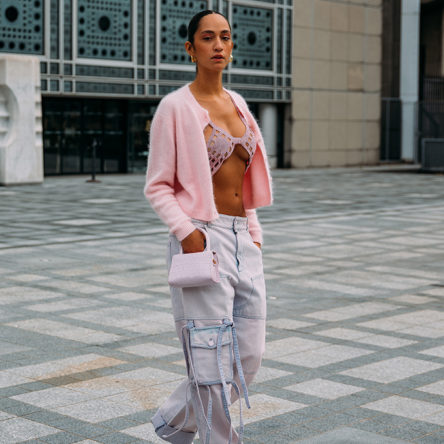