Pharrell Williams was here, wearing some cute diamond and emerald-edged sunglasses he’d designed for Tiffany. Alongside him Kanye West and Julia Fox doubled up in double denim (hers by Daniel Roseberry at Schiap). Pusha T, Shygirl, J Balvin, Gunna, Big Matthew, Sik-k, and Tyler, the Creator were just down the row. This made for an extremely strong crowd at a Sunday morning show that effectively marked the end of this Omicron-quieted season of menswear and augured the unfolding of couture.

In part, they were here for the house of Kenzo. All of them (and us) were seated in the beautiful but chilly (and suddenly weed-fumed) Galerie Vivienne. It was here in 1970 that a small gallery unit with cheap rent was snapped up by 31-year-old Kenzo Takada, who had arrived circuitously from Tokyo five years previously with the dream to emulate Yves Saint Laurent and become a fashion designer.

Shortly after moving in and painting the interior after Rousseau, Kenzo threw his first show here under the name Jungle Jap (which he changed once discovering the pejorative weight of ‘Jap’ in the US). The collection was cut and sewn and painted with fabrics brought from a Montmartre market. As Kenzo later recalled: “I was looking for some kind of identity as an outsider, so I wanted to bring something very Japanese into it, and that meant textiles with a lot of colour and pattern.” By 1993, when he sold his company for $80 million to what would become LVMH, Kenzo had developed that formula to become one of the most beloved and distinct designers operating in Paris. He sadly passed away in late 2020 after being laid low by Covid, but had continued to work on new projects— including a really excellent retrospective book of sketches and photography—until shortly before.

Let’s be honest though: for the last few seasons there hasn’t been much buzz at Kenzo. Yes there was that period, starting a full decade ago, when the Kenzo-coded tiger sweatshirts produced under the excellent Carol Lim and Humberto Leon went from cool to hot to way overcooked. But since their time here ended in 2019 the house has been quiet.

What filled it with noise today was the arrival of new creative director Nigo. As excellently illustrated in the preview/profile yesterday here by Steff Yotka, Nigo’s creativity and clout—and of course his personal passion for and parallels with Kenzo—make him a serendipitously synchronized recruit for LVMH. In fact way before this debut collection’s first look went out, he had already done the French group a great service: as Sidney Toledano recounted to Laure Guilbault of Vogue Business at the show: it was Nigo who first introduced Virgil Abloh to Michael Burke of Louis Vuitton.

In both relation to Kenzo and LVMH, then, Nigo’s arrival is embedded with the “authenticity” without which you suspect he would not have ventured into the fashion-Fashion system. And to read the runes, it makes broader strategic sense to shift focus and hype for a while away from Louis Vuitton as that marque takes a breath and considers how to answer its current dilemma.

So could this collection carry that weight? It looked like it. During a preview at the Kenzo studio—fittingly just around the corner—there had been even more category groups hung, piled and shelved around us than were shown on the runway in this densely-packed co-ed presentation. The plan apparently is to release elements of it in limited edition monthly drops—which fittingly both mirrors the model in which Nigo has previously operated, and also reflects the original MO of Jungle Jap: during that very early period of his brand, Kenzo would sell his garments as soon as possible—ignoring the seasonal credo—in order to generate enough revenue to pay the rent and buy more fabric.

In many other overt ways, Nigo paid due attention to the wellspring without becoming overly deferential: consciously derivative. The key poppy print—I clearly remember my mother wearing a long Kenzo poppy dress in the 1980s—was redrawn and applied in silhouette on washed denim workwear, by velcro patch to hats, plus on waistcoats, midi (almost-swing) skirts, camp collar shirts and more. The cutely kawaii stuffed animal scarves, knit and fleece, were another revival. A more baroque cousin of the poppy print, this one leafier, was also revived and redrawn and used to express that interesting love-meets-war intersection of camouflage and foliage on two full looks and a parka.

The conversation between cultural clichés was highly enjoyable: for every souvenir jacket with a map of France on the back there was a beret (always best in burgundy) stitched with the year of Kenzo’s founding. Not at all ironic, however, were the beautiful high kimono jackets in navy, gray and olive. The bibbed gingham aprons worn over suiting were apparently adaptations of a specific Japanese garment worn during the tea ceremony.

Nigo is of the generation raised during Japan’s obsessive absorption and reinterpretation—often more beautiful than the inspiration—of the Ivy League original into American Casual and Yankee variants. During the preview he’d commented fascinatingly on the difference between building a collection with European factories (which he said created garments more “clean” than he’d wish for) compared to Japanese (who can make it “dirty”). For this reason he’d insisted all the denim in this collection hail from his homeland, even if the top-stitching on his undyed indigo was a little too “clean” to be exactly perfect. Tightly observed post-Ivy, post-Yankee, come-to-Paris pieces here included the varsity jackets—currently riding a wave—hickory stripe and unwashed dungarees.

A very striking new floral punctuated by curling calligraphic strokes and the occasional tiger was an adaptation of a sketch by Nigo’s current pottery master, from whom he is learning a specific type of the art named Aka-e. These were printed onto loose, long, workwear-ish lab coats and suiting, as were a selection of Kenzo’s original sketches for the house.

Shortly before the show, Williams said: “The coming together of Nigo and Kenzo—it’s symbolism, right? None of us would miss it. Nigo is the father of so many things that we’ve all looked up to, and that have meant so much to all of us.” Of the collection (which he’d also previewed) he added: “So it’s like 1950s and ’60s clothing remade in the ’80s, you know, but through the lens of the 2020s.” Which was a pretty perfect summation of this first page of a fresh chapter in the story of the house of Kenzo. 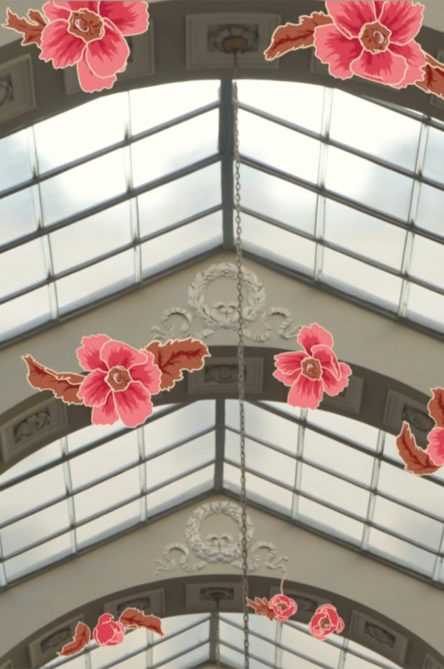 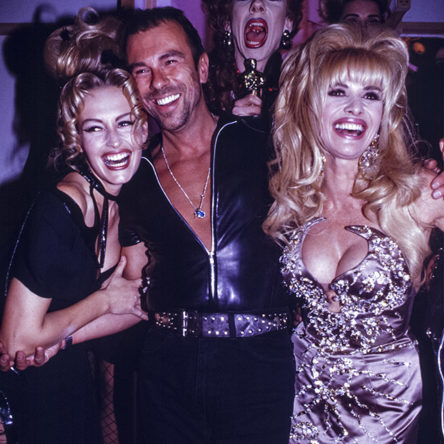 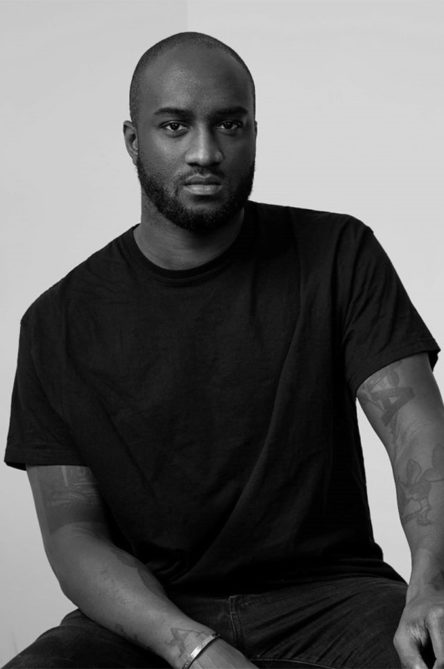 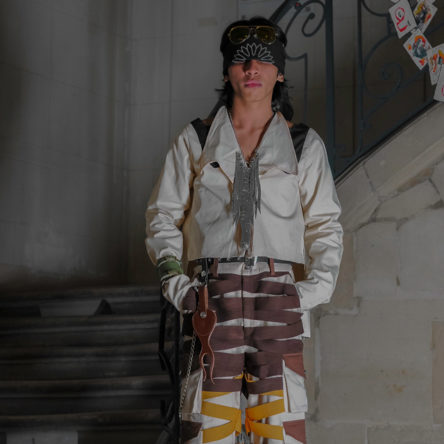