Katie Holmes has become a stealth style influencer ever since she wore Khaite’s cashmere bra back in 2019 (which also happened to serve as a precursor to all the loungewear we’ve been purchasing recently). Her latest go-to? These vegan boots, which have quickly risen to the top of our pandemic wishlist.

Paired with jeans, the AERA boots are perfect for those rare occasions we get to leave the house right now. And the trend is clearly catching on, with the Charli style becoming one of the brand’s bestsellers. “When someone like Katie Holmes is wearing your shoes consistently, it gives you another level of credibility as a young startup,” AERA CEO and co-founder Tina Bhojwani tells Vogue via Zoom from New York. “Those boots are really comfortable—I think now we’re seeking comfort more than ever.”

Since its official launch in February 2020, AERA’s mission has been to create vegan footwear that’ll shake up the luxury space, at a time when environmental concerns about leather production are increasing. “I only [wanted to create] vegan shoes if they didn’t look vegan,” Bhojwani continues, noting the lack of options there were on the market. “In my mind, vegan shoes didn’t correlate with luxury style and design.”

While heels were a mainstay in AERA’s pre-pandemic offering, practicality is at the core of the latest collection (such as classic ballet pumps and summer slides). “The new styles [are aimed] towards the mood we’re living in today,” Bhojwani continues.

Currently, the main challenge in creating eco-friendly vegan shoes is avoiding synthetics. AERA’s footwear, crafted by artisans in Italy’s famous Veneto region, is made from a mixture of bio-based materials—think cotton, viscose and non-edible field corn—and as much recycled synthetic content as possible. “The dream was to have 100 per cent bio-based materials, but after much research, we realised that isn’t possible yet,” she explains. “I do think there will be that opportunity in the future.”

In a bid to have a positive effect on the planet, the brand offsets its carbon, water and plastic impacts by 110 per cent through investing in certified reforestation, water restoration and plastic collection initiatives. Launching a repair and resale strategy is also a key area of focus to ensure the shoes are worn for as long as possible. “We’ve measured every impact throughout the entire process using a third-party agency,” Bhojwani says. “We want to mindfully give back more than we’re taking.”

It’s clear that despite being just a year old, AERA is already setting the standard for luxury vegan footwear. So, what’s next? “I’ve had a lot of requests from existing customers to move into handbags using the technology of what we do in footwear. But that’s down the line,” Bhojwani concludes. As for Holmes? We expect to see her wearing a lot more AERA in the future. 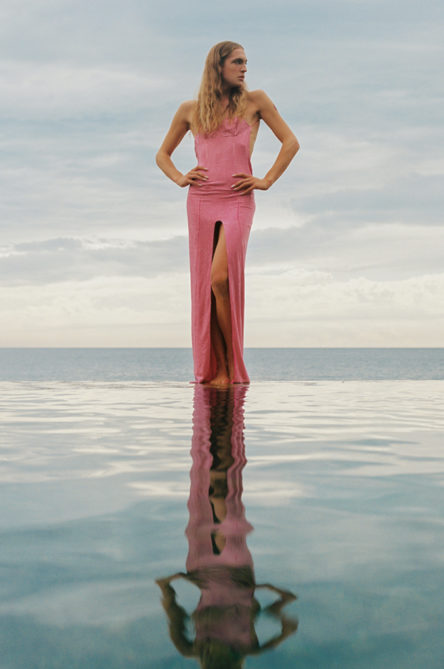