From hacking Balenciaga for its 100th-anniversary collection to launching a new homeware line, whatever Gucci does, the world sits up and pays attention. And with the Italian fashion house now officially the most popular luxury brand among Gen-Z consumers—which also happens to be the demographic that’s most concerned about a company’s values—Gucci doesn’t take its status as a megabrand lightly.

“[Brands] should lead by example,” Marco Bizzarri, Gucci CEO and president, tells Vogue via video call of the company’s commitment to lowering its environmental impact. “We have decided to use our platforms and our voice because of the awareness of the Gucci brand worldwide. Like any other company or industry in the world, we need to understand it’s not even a choice—we just need to do it.”

The brand is clearly making strides in the right direction, with its first Gucci Equilibrium Impact report revealing it has managed to achieve its 2025 target—to reduce its environmental footprint by 40 percent compared to 2015—four years early, achieving a 44 percent reduction relative to growth. The brand’s greenhouse gas emissions, which includes emissions in its supply chain, also fell by 47 percent in relation to growth—not far off its 2025 target of a 50 per cent reduction.

Will Gucci now be setting a more ambitious goal as a result? “We don’t win any prizes for reaching the objective earlier,” Bizzarri—who confirms that Gucci has also reduced its footprint in absolute numbers, despite the brand growing—responds. “We are working continuously in terms of using new materials, renewable energy, and technology to change our processes. I think it’s important that we continue in that direction, and set targets going forward that are more and more ambitious.”

It’s worth remembering that Gucci has actually been carbon neutral across its own operations and its supply chain since 2018, by offsetting any emissions it can’t reduce or avoid—with Bizzarri encouraging other companies to do the same as part of the Carbon Neutral Challenge in 2019, when he appealed to CEOs for faster action to deal with greenhouse gas emissions. “I’m not a great believer in targets for 2050 because it’s something I cannot control; I don’t want to give this kind of burden to my successor,” the 58-year-old explains. “By 2050, I’m going to be 90—the company has to do what is possible now.”

Circularity, too, is increasingly a focus for Gucci—as shown by its recent partnership with luxury resale site The RealReal and the launch of its Off The Grid collection in 2020, a unisex range made entirely out of organic, recycled and bio-based materials. “Working on this project was very interesting because I would say my job is, above all, experimentation,” Gucci creative director Alessandro Michele told Vogue at the time. “The project has become a symbol for the new era.”

Investing in ecosystem restoration and protecting biodiversity is also crucial when it comes to helping our planet, which is why Gucci launched its Natural Climate Solutions Portfolio in January to conserve critical forests, restore and protect mangroves, and scale up regenerative agriculture projects. “Apart from the fact that investing in biodiversity and nature is good, as a whole, for our company, it is very much related to what we do,” Bizzarri explains. “We rely on what comes from nature.”

Despite all the brand’s achievements to date, Bizzarri’s biggest hope is that others in the industry ramp up their eco-initiatives as well. “There isn’t a winner,” he concludes. “Either we all win or we all lose—it is extremely important we remember that.” 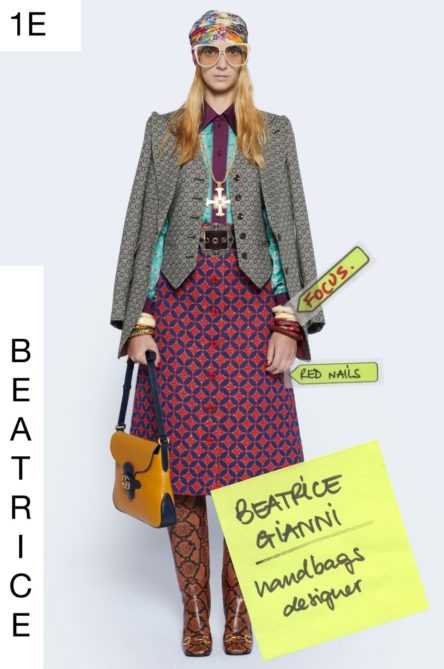