Suave and slick, Sean Connery was every inch the blueprint. Known for his svelte heroes and, later, paternalistic mentors, the actor can hardly be mentioned without the word “legend” preceding his name. He was a Hitchcock leading man, Indiana Jones’ father, and People’s “Sexiest Man of the Century” in 1999. And, of course, from 1962 to 1971, he was Bond… James Bond.

The celebrated Scot passed away in his sleep yesterday, in the Bahamas, surrounded by his family. A producer as well as an actor, his career stretched to span seven decades. Before he retired from the industry officially in 2006 after receiving the American Film Institute’s Lifetime Achievement Award, Connery had cinched an Academy Award, two BAFTAs, and three Golden Globes.

From this vaulted history, a humble beginning: Connery’s first job, shortly after leaving school at 13 years old, was as a labourer and eventual milkman at St Cuthbert’s Co-Operative Society. The company, now Scottish Midland Co-Operative Society, paid tribute to their “undoubtedly… most famous former employee” in a tweet yesterday. He snagged his first major film role in 1957, in the British gangster movie No Road Back, and shot to international recognition in 1962, which saw the release of the first James Bond film, Dr. No.

Connery was famously uncomfortable with the stardom the Bond mantle thrust upon him, but revelled in the subsequent offers that poured in, finding ways to buck the Bond persona with more challenging character roles. His Oscar win was the result of one of these performances—the hard-nosed Irish policeman Jimmy Malone in The Untouchables.

Now, the reactions to his death are flooding in. Co-star and friend Michael Caine tweeted that, “The Man Who Would Be King was THE KING.” Billions showrunner Brian Koppelman shared an endearing story of the actor’s grace when it came to collaborating on a movie that was ultimately not to be. Daniel Craig, the current Bond, released a statement that read in part: “The wit and charm [Connery] portrayed on screen could be measured in mega watts; he helped create the modern blockbuster.”

His James Bond producers, Michael G. Wilson and Barbara Broccoli, noted through the official James Bond Twitter account that, “He revolutionised the world with his gritty and witty portrayal of the sexy and charismatic secret agent.”

Though he turned down lionised parts like Gandalf in The Lord of the Rings series and the Architect in The Matrix movies, Sean Connery had more than his share of iconic performances. On the occasion of his sad passing, Vogue takes a moment to raise a martini glass in toast to his illustrious career, and its many highlights.

It’s doubtful that Connery would be pleased with more than one entry from the Bond franchise on this list, given his distaste for his immortal association with the role. If there can only be one, then, it has to be Goldfinger. “Larger than life, faintly ridiculous, completely cool,” Empire’s Ian Freer concluded in 2000, “Goldfinger is the quintessential James Bond movie.” This is the one where Bond emerges from the water, unzipping his wetsuit to reveal a perfectly starched tuxedo underneath. It’s also the one where the spy finds himself strapped to a metal slab, fighting to free himself while a laser beam threatens to slice him in half. Audacious and absurd, Goldfinger is unrivalled—a perfect match for its unflappable star.

Speaking of unflappable, Connery is almost unrecognisable in Zardoz, sporting a droopy mustache, long braided ponytail, and red loincloth. It’s a nerveless performance from Connery as Zed, a post-apocalyptic barbarian enforcer serving at the pleasure of the titular stone god Zardoz, that sells the preposterous getup, and premise. A quirky romp that plays along the surprising lines of Plato’s Allegory of the Cave, Zardoz is far easier to get sucked into than it sounds. A provocative and very silly film, it’s nevertheless surprisingly earnest. And no one onscreen is trafficking in that earnestness like Connery, who embraces the ludicrousness with open arms.

This is the movie that lured Connery back to acting, after a two-year hiatus prompted by an incredibly negative experience on the set of 1983’s Never Say Never Again, the “unofficial” Bond flick that saw extensive production strife. It’s not hard to see why: The Name of the Rose landed Connery his first BAFTA in 1987. Drawing, no doubt, from his experience as a part of the ensemble in 1974’s Murder on the Orient Express, Connery shines here as Franciscan friar William of Baskerville, who teams up with Christian Slater’s novice to solve a murder at an Italian abbey. Questioning the notion of “truth” through a theological lens, the movie is based on the 1980 debut novel of Umberto Eco. Yes, it’s a whodunnit, but it’s also a biblical critique and medieval study on the cinematic concept of signs and signatures. Connery channels that highbrow intellectualism into an exquisite portrait of a small man trying to navigate a small world as best he can.

Roger Ebert called Connery’s “the best performance in the movie.” Given the sensational standard of The Untouchable’s cast across the board, including Kevin Costner, Robert De Niro, Andy García, and Patricia Clarkson, this is top-shelf praise indeed. The rest of the world seemed to agree, as Connery was lauded with that year’s Golden Globe for Best Supporting Actor. More than that, though, The Untouchables proved Connery’s chops as a character actor. Though his Scottish accent pokes through his Irish role at times, Connery inadvertently predicted the next stage of his career through his phenomenal portrayal of the flinty Jimmy Malone, who acts as mentor to Kevin Costner’s protagonist. Gang film history also has The Untouchables and Connery to thank for one of its greatest monologues, on the subject of “the Chicago way.”

Indiana Jones and the Last Crusade (1989)

As co-star John Cleese noted in his tribute yesterday, Connery was “the only one of us to find the Holy Grail.” Cleese was referring to the Scottish star’s time as Indiana Jones’ father in the series’ third installment. Harrison Ford and Connery take turns verbally jabbing at one another throughout the run of the film, even as they team up to battle Nazis and save one another’s lives. Indiana Jones and the Last Crusade is a gripping action-adventure entry in the franchise that stands readily on its own two feet, thanks in part to Connery’s stuffy academic. He was nominated for another Golden Globe for portraying Henry Jones Sr., who is hysterical and poignant in turn from his first moment on screen. Connery turned down Spielberg when the director propositioned him to return for 2008’s Indiana Jones and the Kingdom of the Crystal Skull—and, given how that movie was received, cinephiles everywhere are much better off for it.

A spy thriller set during the Cold War, The Hunt for Red October saw Connery play a Soviet submarine captain looking to defect to the United States. Alec Baldwin, as analyst Jack Ryan (another iconic mantle), must race against time to prove that Connery’s captain isn’t in fact planning a renegade nuclear strike on America, as the CIA has lost contact with the submarine’s crew. Given his time in the Royal Navy, for which he volunteered at age 16 in 1946, Connery’s portrayal of Marko Ramius is utterly convincing and equally moving. Director John McTiernan skillfully deploys multi-linguistic dialogue and subtitles (and lack thereof) to play with the audience’s perspective and allegiances, but it’s Connery who should get the praise for conveying the all-too-human nuance of his conflicted Soviet.

Connery turned back to stretching his legs in fascinating lead roles again later in his career, once he was satisfied he’d moved far enough away from his 007. Despite its logline as a thriller set on Alcatraz Island, Michael Bay’s The Rock is actually one of Connery’s more risible entries into his canon. It was one of his own personal favourite performances from that decade, however, and saw him portray an escaped inmate who accepts a deal to get a pardon—if he can break up a rapidly-escalating hostage situation and terror plot on the island. Connery’s character, along with Nicholas Cage’s FBI specialist, are brought in to handle the situation. And handle it they do—Cage’s patented eccentricity is a perfect foil for Connery’s straight man, who alternates gravitas with camp. As he leads an elite team into the prison with all the bombast Bay’s audiences have come to expect and love, all Connery fans will be delighted by his character’s presence, which perfectly marries farce and dignity. 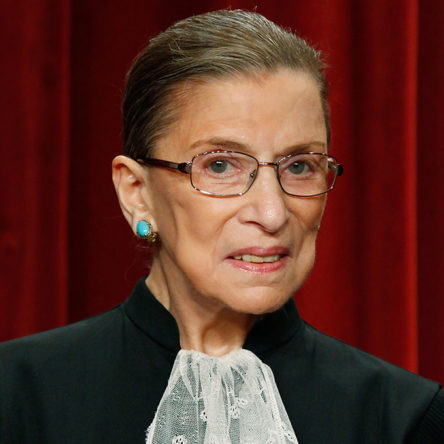 The eternal legacy of Ruth Bader Ginsburg: 6 powerful quotes to remember her by