At first glance, Saint Frances might seem like another effort to tick all of a woke millennial’s checkboxes without quite getting into the heart of any issue. But five minutes in, you’ll realise that the undramatised authenticity the feminist-comedy presents is far from the nebulous, symbolism filled variants you might be used to.

All within its 1 hour 46 min run time, the film puts a fresh spin on several issues that the modern woman is familiar with—some less tangible, like the unreasonable pressures to have children at the “right” time or at all, and some soberingly real, like postnatal incontinence. Peeing every time you sneeze, anybody?

The leading role of Bridget, a 34 year-old (with, in her own words, no prospects) who is hired by a lesbian couple to nanny their 6 year-old, is played by rising talent Kelly O’Sullivan. O’Sullivan, who also happens to be the writer of the film, navigates the minefields of the female experience in both her roles with grace and refreshing honesty.

As Bridget grapples with her self-perceived lack of success, she also struggles to connect with a reticent child under her care. But eventually, what starts as an awkward, begrudging companionship turns into genuine affection and empathy, and she finds herself becoming a part of someone else’s family—deeply involved in the most personal of their entanglements.

Everything about the film is literal. We see copious amounts of menstrual blood everywhere: on the bedsheets, on people’s faces, and even on the toilet paper one character wipes herself with after getting an abortion. The film is full of unpretentious dialogue that doesn’t shy away from its heavy subject matter. One character talks briefly about wanting to swing her baby by the ankles in a fit of frustration, before saying with a sigh, “Women should talk about [post-partum] more.”

Bridget herself is not your typical hot mess—she never screws up quite enough for viewers to stop empathising with her. Instead, her missteps are genuinely relatable, achingly familiar, and on many levels, completely justified.

Her choice in men, for example, will bring you back to some poorer decisions you (or perhaps, one of your girlfriends) might have made in the past. Her confidence and relative self-assuredness in the face of it all is comforting. She’s kind to her mother, even as she gently rebukes her for the sexist undertones lacing her comments.

Let me be clear, Saint Frances has many things going for it. The film’s pastel-toned soft focus cinematography juxtaposed with its inherent grit, the amount of feminist ground it covers while staying believable, the diverse cast, the candor—these are all pluses, and yet, the best thing about the film remains its youngest cast member. Namely, the gifted Ramona Edith Williams in the role of 6 year-old Frances, the child Bridget is tasked to nanny.

At just 7 years of age, Williams plays against her cast-mates with the kind of raw intelligence and nuance that makes you wish you could commit each scene with her to memory—like when she confidently regurgitates a spiel about using a Diva cup one of her moms had clearly taught her. She comments incisively on everything and operates with a complete lack of filter, making for several adorable yet insightful bursts of the kind of astonishing clarity only a child can provide.

Most outstanding are the unsubtle displays of the influence a strong feminist upbringing can have on a child—even through a lisp and in the sweetest baby-voice, Frances rattles off confidently about respecting her own body, because “every woman’s body is different”.

At the end of the day, Saint Frances holds a mirror up to the most intimate parts of our lives with a clear absence of shame. It never strains to make a point, and stands easily as one of the most honest and believable portrayals of modern-day womanhood I have seen in a long time. As the film wrapped up its messy bundle of issues that are seldom depicted on Hollywood screens, I felt the strongest urge to call up my closest girlfriends and talk to them about it—after insisting, of course, that they watch it first.

Saint Frances is screening at The Projector from 8 October. 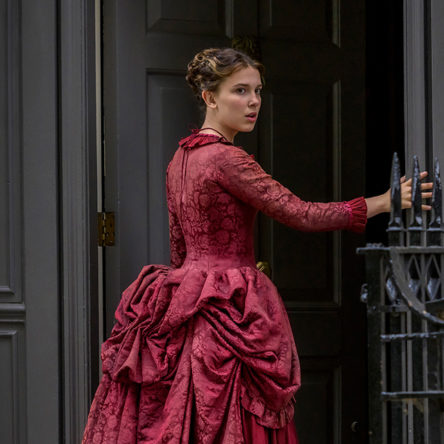