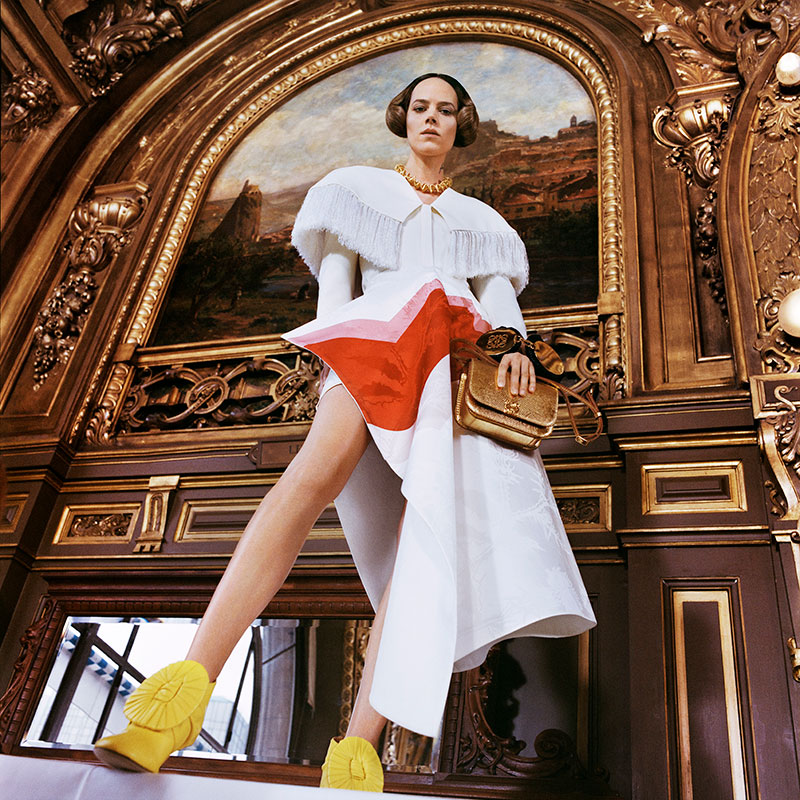 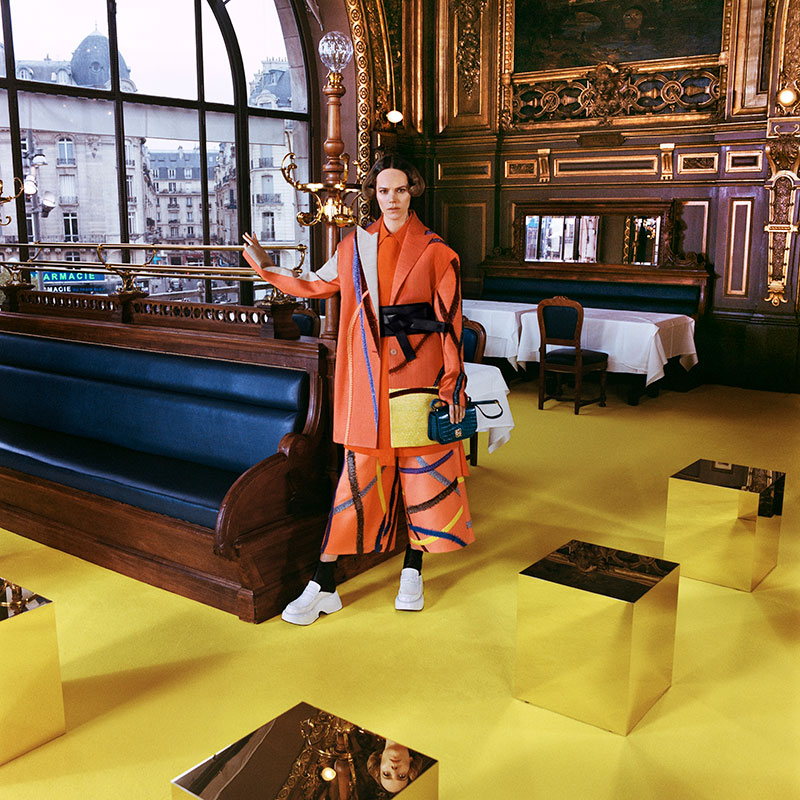 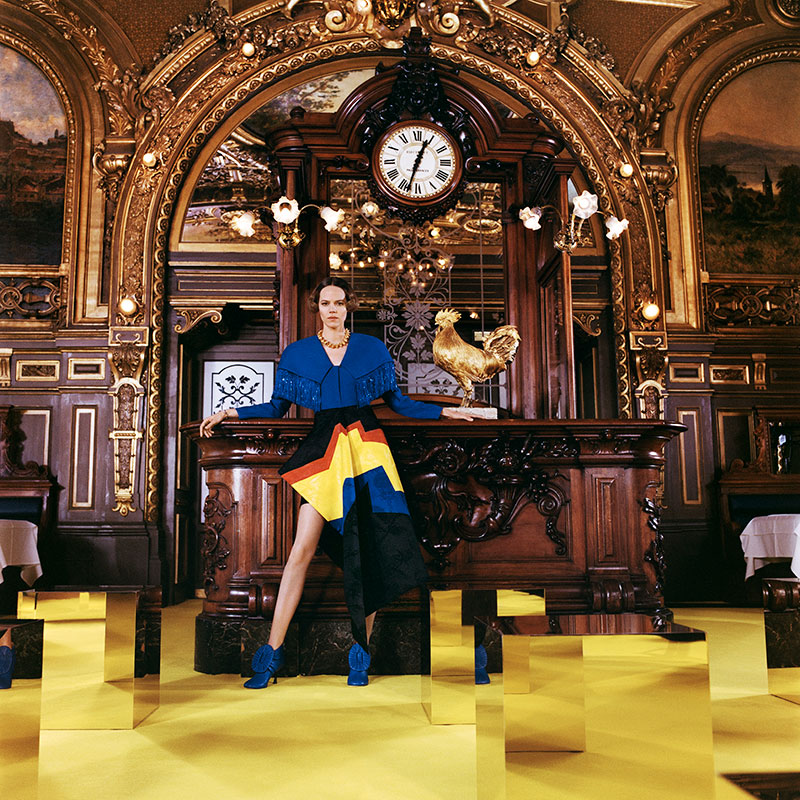 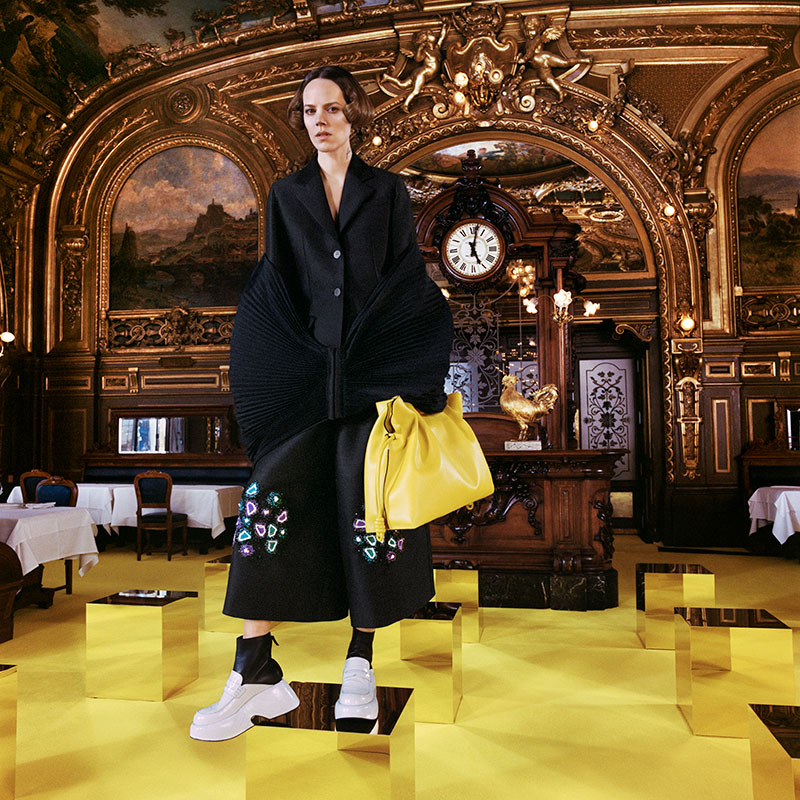 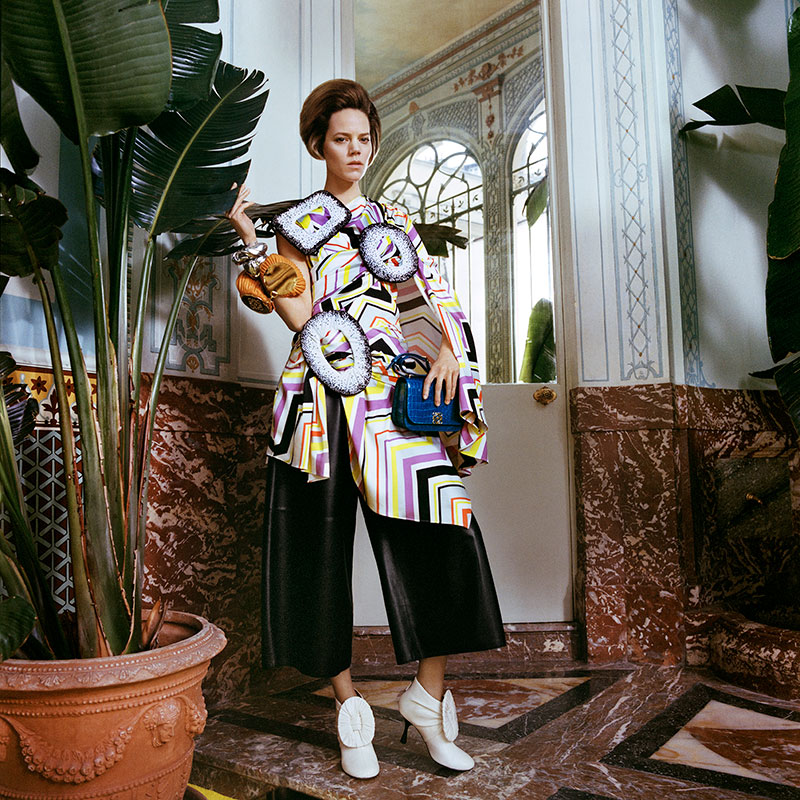 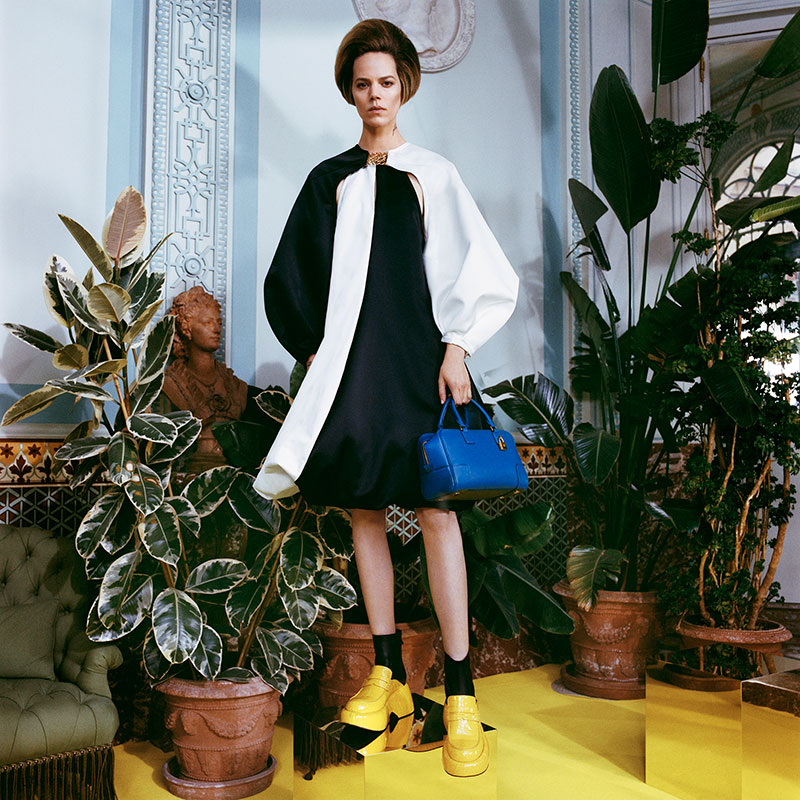 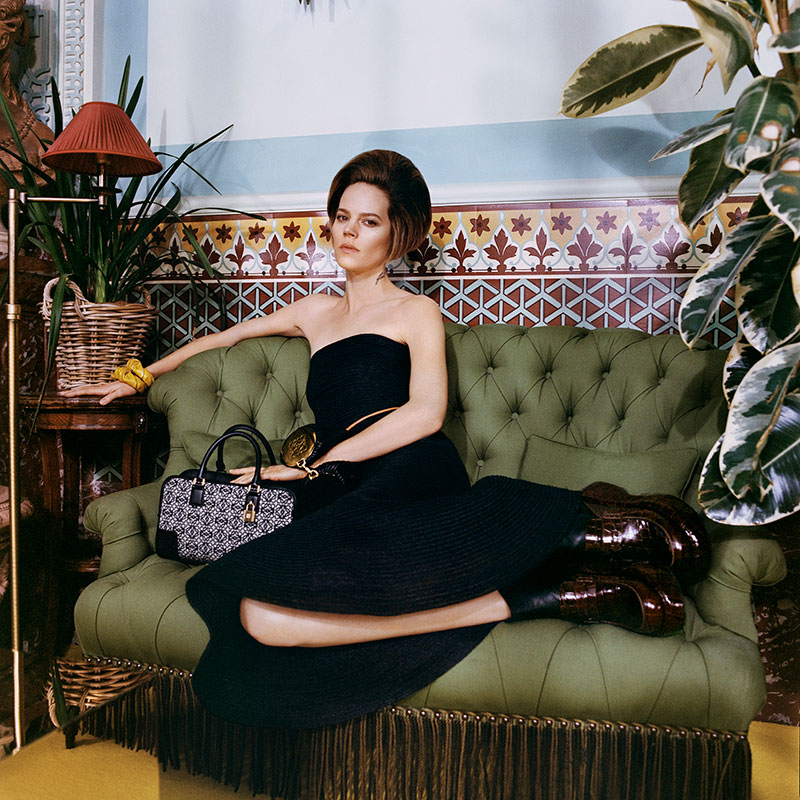 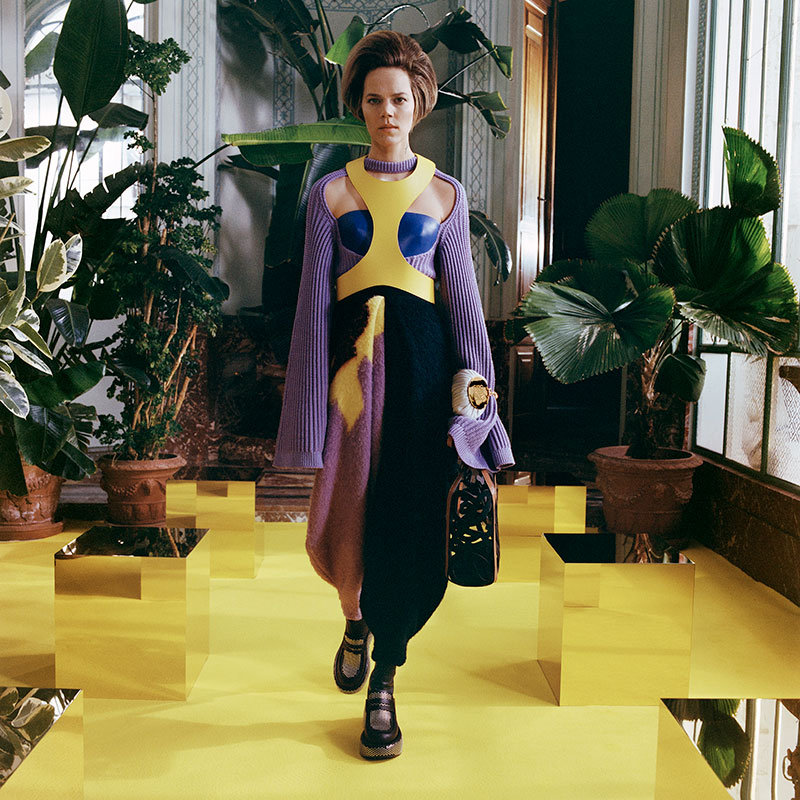 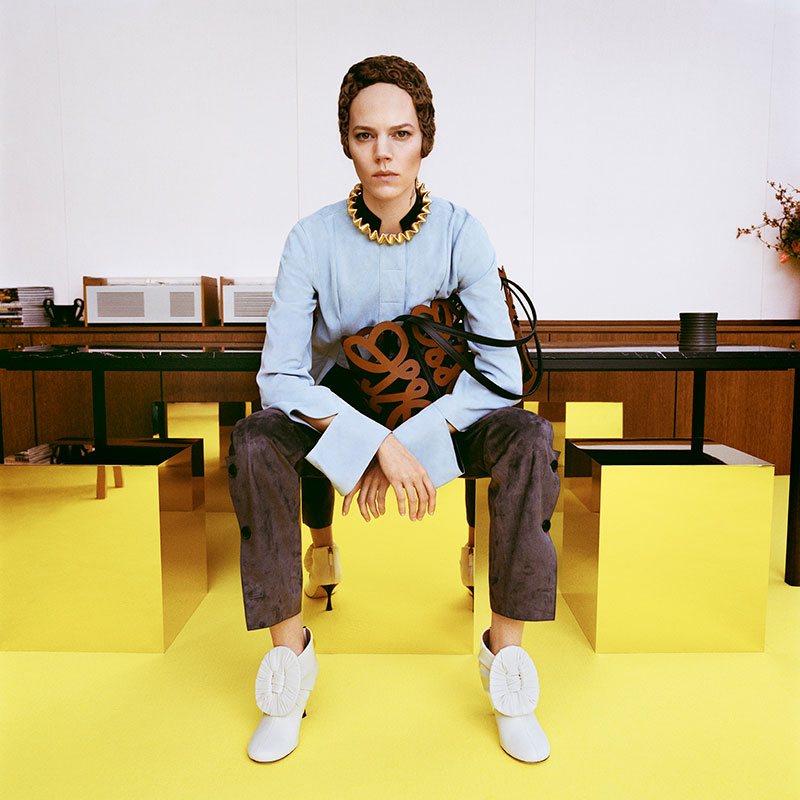 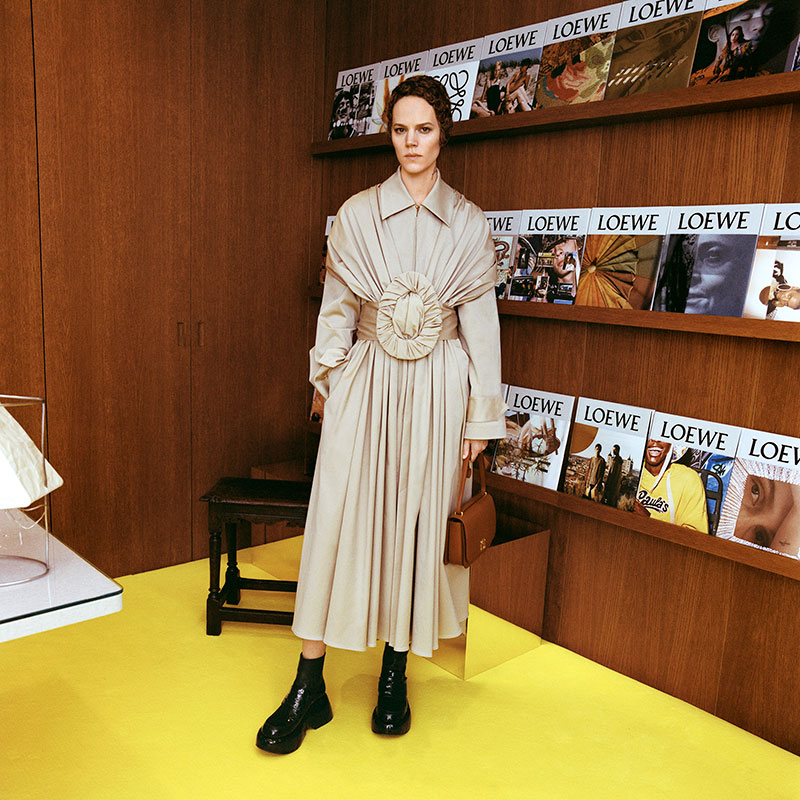 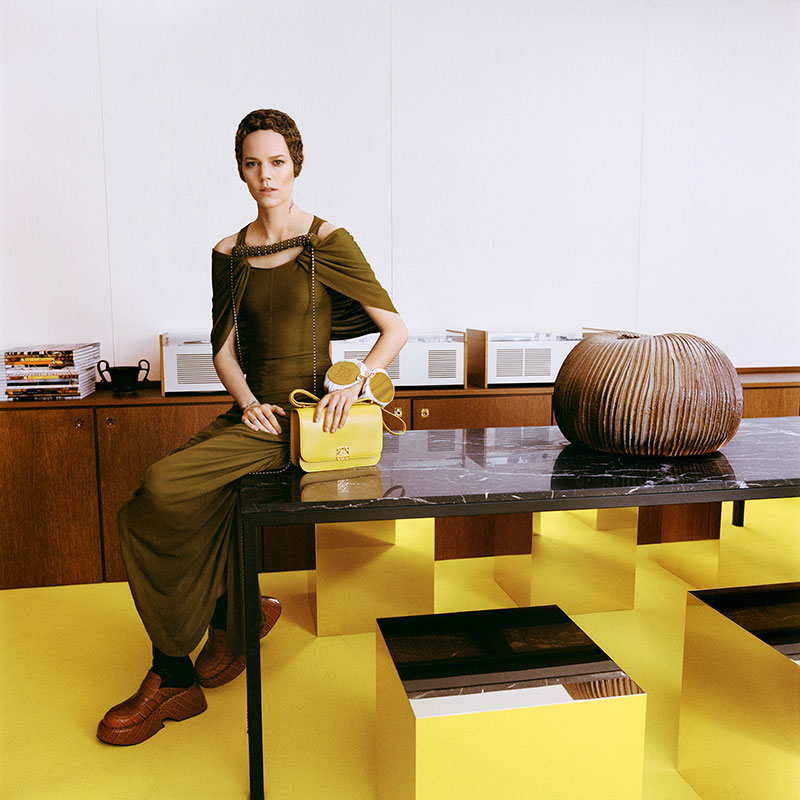 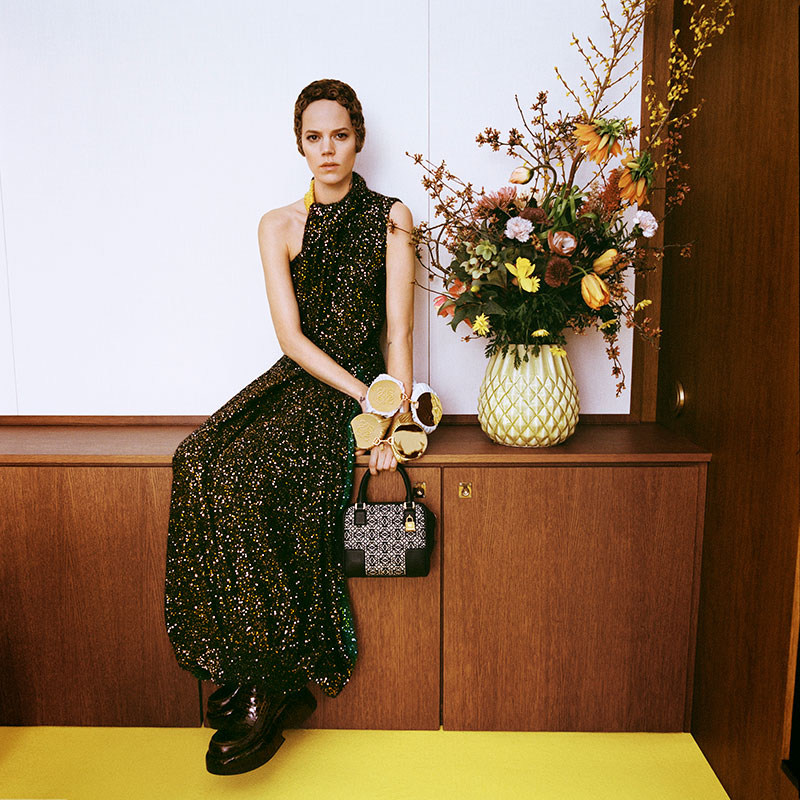 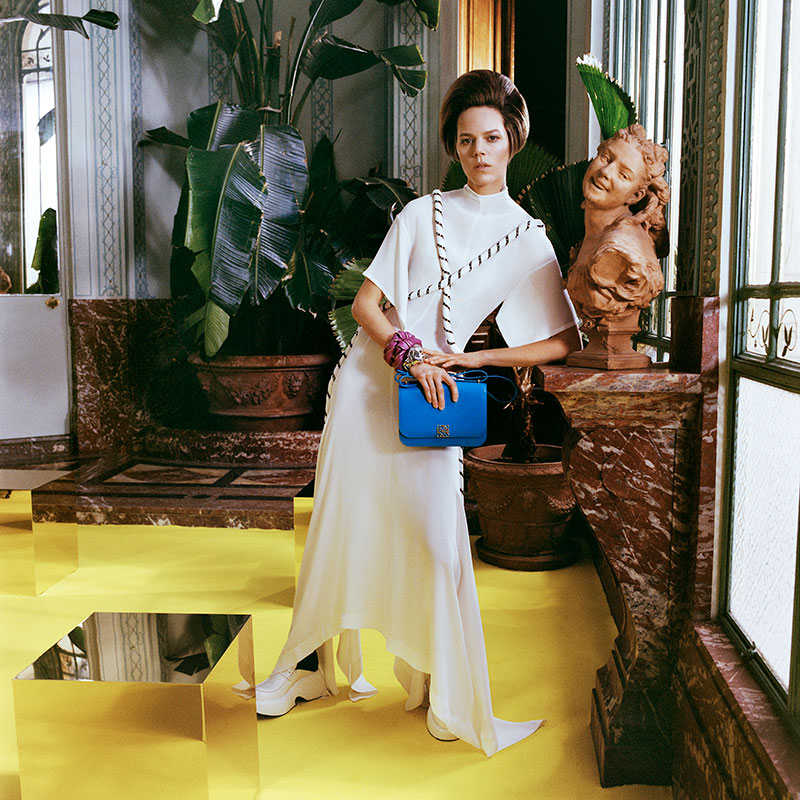 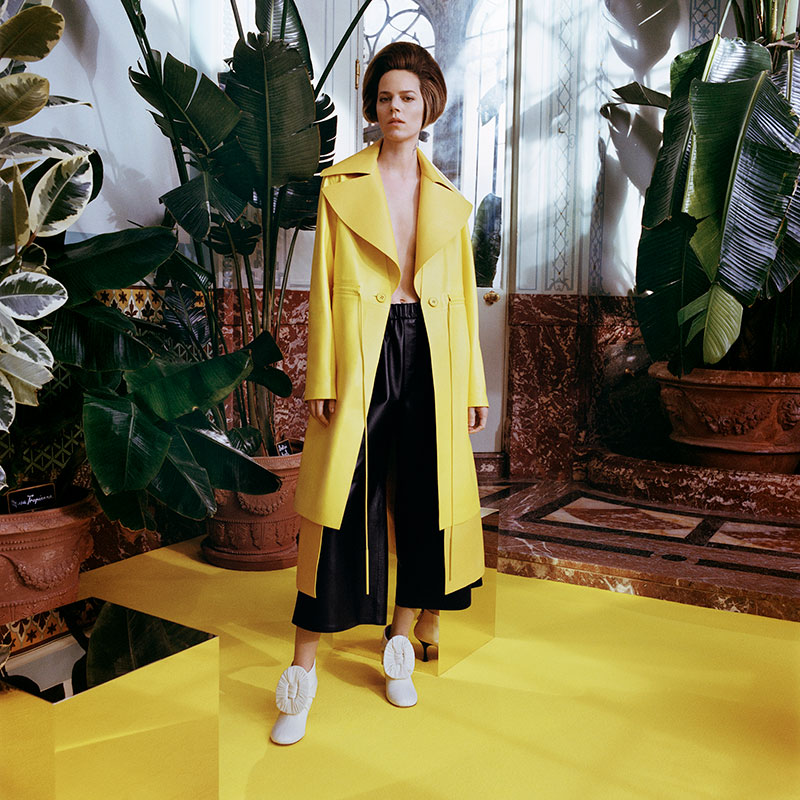 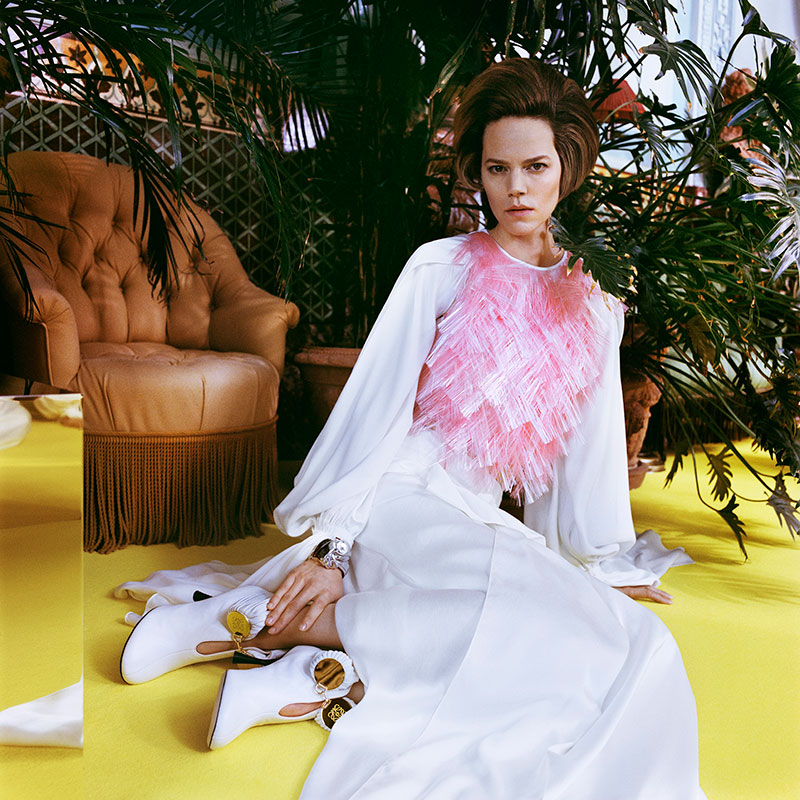 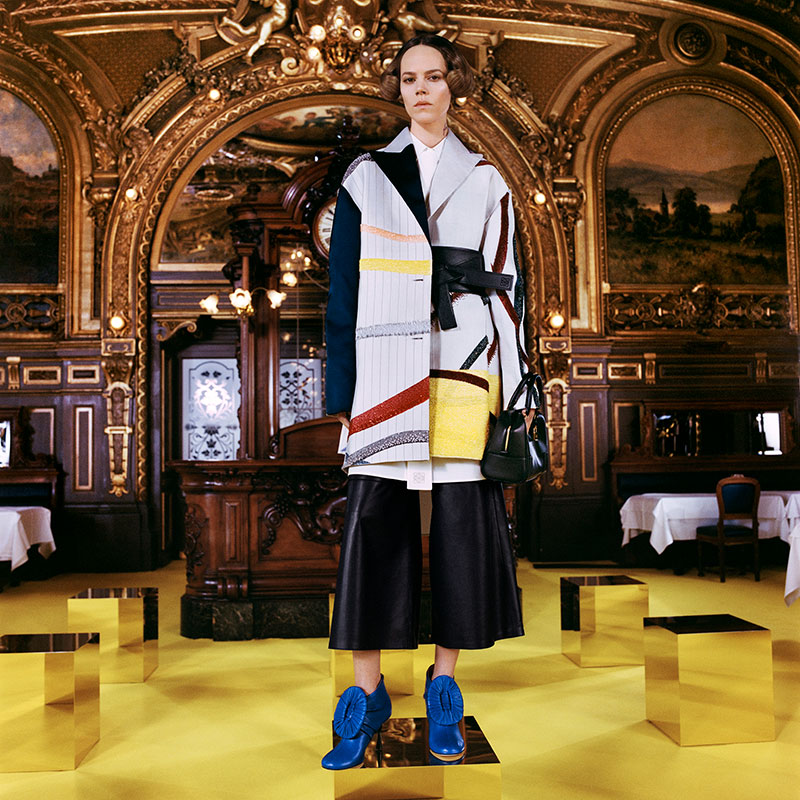 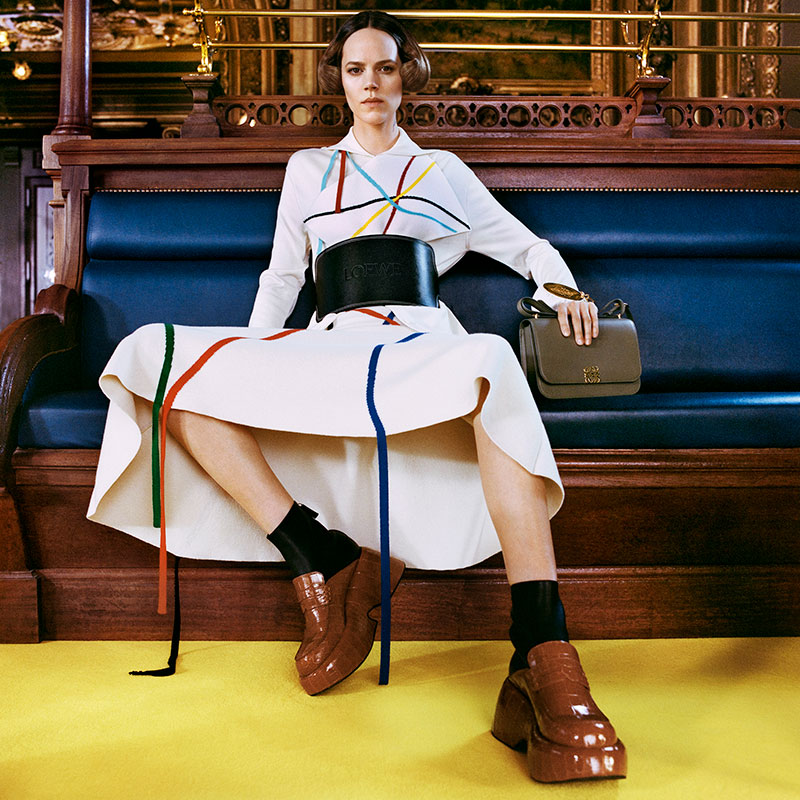 Could a buttercup yellow Loewe handbag be medicinal? Jonathan Anderson was talking to his stylist Benjamin Bruno about the fact that he, Bruno, had started turning up at the studio wearing colourful yellow or pink T-shirts during the depths of the winter. “Benjamin said, ‘It’s colour therapy, you know, when you wear a bright colour you feel better!’” Anderson recounted. “So I was just like, Maybe that’s what I need: a bit of colour therapy. So for me, this collection is a kind of letting go—it’s about clothing to get high on, to get off on.”

Well, if you’re reading this, you’re already here for the buzz of what fashion can do visually, viscerally, and—if you’re a Loewe/JW Anderson fan—for the entertaining rush of having your intellect tickled by some odd new ideas. This season, well, it’s all about mood-changing zigzaggy prints; the curiosity of avant-garde shapes; perfectly placed, succulently colourful accessories; and what Danielle Steel is feeling about fashion. Say what? Go to Loewe’s website, and there, to be sure, you’ll hear the world’s best-selling novelist in a podcast with Anderson. This is “the ‘why not?’ era,” she remarks. “I’m much more into fun things now…. I like silly stuff. I guess I get more eccentric as I get older…. Life is serious enough!”

The collaboration with Steel came about through Anderson’s connection with her daughter Vanessa Traina. In a continuation of his printed-matter lockdown show alternatives, he came up with a Loewe newspaper, within which is a trail of the first chapter of Steel’s new novel, The Affair. Neatly enough, it’s a tale about a New York fashion editor in chief. The paper, with all the pictures of the Loewe collection, is “being distributed to a million readers” including readers of The New York Times, Le Monde, and Le Figaro.

In other words, it’s time to embrace the fun and euphoria of fashion again—or at least to be able to imagine ourselves into the time when we can. “As much as people always see the cynical in luxury fashion, there’s something in it that releases endorphins that make you feel good,” Anderson said in a Zoom call from the Loewe office. For the shoot, he rolled out the yellow carpet in Paris at the Le Train Bleu restaurant, his own office at Loewe, and a private members’ club off the Champs-Élysées. Elaborate settings for Anderson’s skilled composition of bold internet-carrying shapes (half-moon sleeves, plate-sized buckles), his subtly wearable pieces (a royal blue suede pantsuit, a yellow nappa-leather coat) and a gamut of bags and shoes that deliver quirk to the adventurous and classicism to the conservative. “I don’t see this as a collection about fantasy. I think it’s about this idea of projecting what a new reality will hopefully be,” he said. “I think fashion is going to be important in the next while, in making people gain the confidence of going back out and dressing up again. The whole point of this collection is: Believe it, and it will happen.” 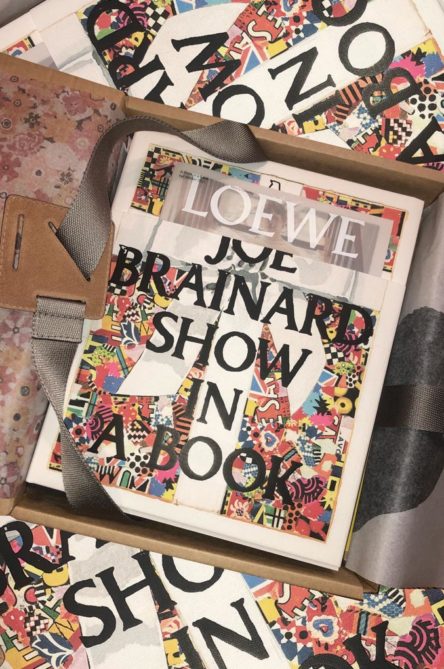 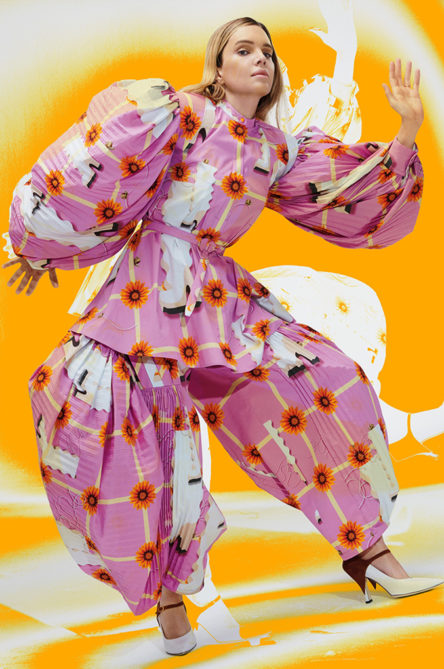 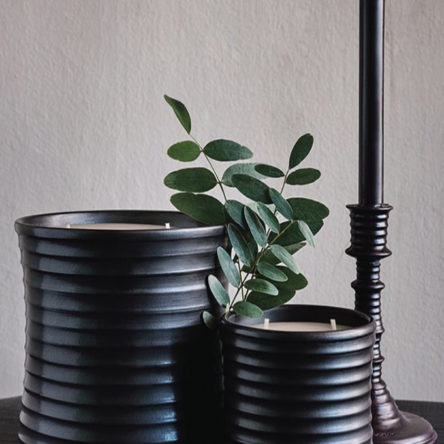