Art Deco and the interwar period have, ominously, been recurring motifs this season. The high-octane glamour that flourished in the face of impending gloom a hundred years ago resonates with a new post-pandemic era where history seems to be echoing itself. Jeanne Lanvin lived and worked in that time, and the archives Bruno Sialelli now consults as her house’s present-day custodian strongly embody the now-or-never appetite for opulence inherent of that time.

“We were already into that way of thinking with Covid, and it’s continuing to be—let’s say—hard and scary,” he said during a collection viewing on the morning of its filmic release. “There’s something about these moments of interwar that feels worrying but optimistic at the same time, but these are times when creativity and culture should raise their proposals as a kind of remedy for these concerns.”

With that in mind, Sialelli captured his collection in a suspenseful film noir-type runway video with a thrilling electronic soundtrack by Yasmina Dexter. He fashioned what he called “a past-to-present silhouette” in trouser suits transformed into formal coat dresses and jumpsuits—some with dramatically padded shoulders—and outfits composed of coats, blouses and trousers, which somehow had the same feeling as an old-world cocktail dress, just condensed and contemporized.

Patterns created by intricate jacquard and all-over beading brought the Art Deco to the ball in a big way, along with layered disc embellishments lifted from the archives of Jeanne Lanvin. “I love time patterns. I love inspecting that idea. Jeanne Lanvin was obsessed with Egypt. We have an image of her on a camel in front of the Cheops pyramid,” Sialelli said. Kept intact since the day she left it, the founder’s office is a time capsule of everything that inspired her, including the many scrapbooks she created on her travels. In her Egyptian adventures—a hotspot for the Art Deco set—Sialelli detected an air of sci-fi that felt quite now.

“From Cecil B. DeMille to sci-fi movies like Dune or Stargate, there’s something in Egypt that feels so graphic and modern and futuristic,” he said. Denis Villeneuve’s interpretation of Dune from last year has imprinted itself on a lot of designer minds this season, and its ancient-futuristic scenography and costume design were detectable across Sialelli’s silhouettes, surface decoration, and the sphinx prints he emblazoned on tops. For all his sumptuous adornment, girlified robes de style and “carnal flower” ruffles on dresses, his time travels—and the parallels he identified—were most compelling when the devil was in the detail.

Cases in point: the aforementioned jumpsuits, which served a contemporary reductions of glamour-dressing rather than an intensification of the same idea; a men’s overcoat that looked perfectly classic from the front but which had been infused with the memory of a bustier on the back, elegantly built into its structure; or another men’s overcoat in beige jersey with crushed gold velvet side and sleeve panels that created an optical illusion, opulent yet controlled. 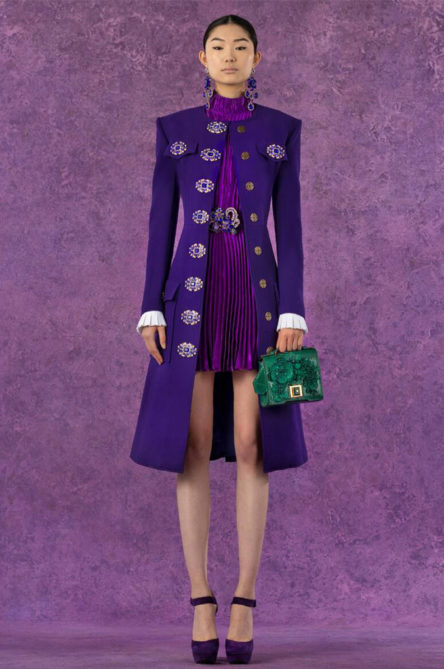 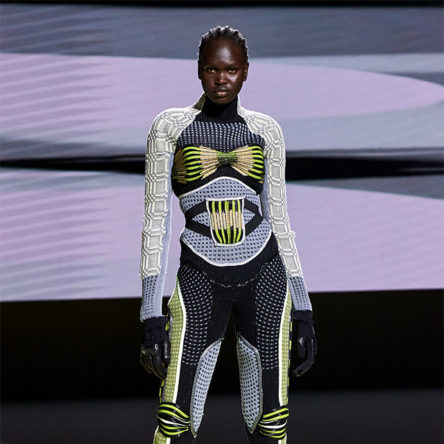 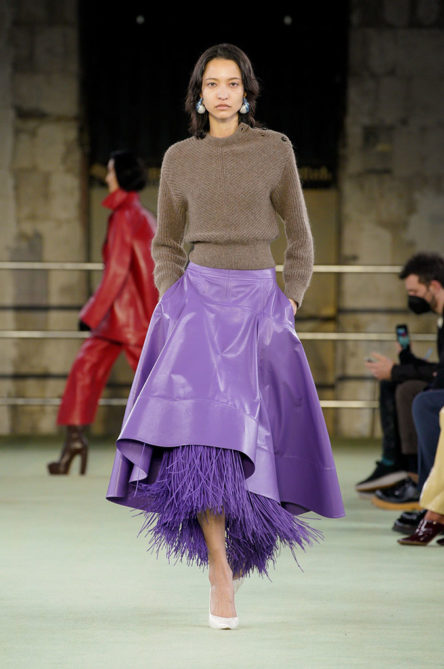 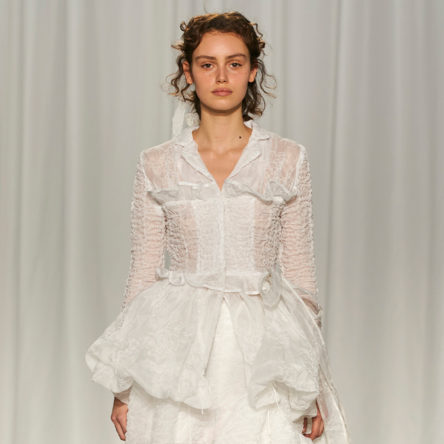