Fashion designers and watch brands usually don’t mix; unless you’re looking at the domain exclusive to fashion houses such as Chanel with the J12 or Louis Vuitton with the Tambour, indeed Hermès with the Cape Cod. But give the unusual circumstances in which we now live, it becomes hardly surprising to see brands from both sides venturing off the beaten path.

Of course they would have been in the pipelines months before coronavirus descended on the globe, so we wouldn’t earmark them as a corollary of the pandemic. Instead, it shows us that luxury watchmaking has truly grown out of its own shell, to fully embrace the fact that watches are not merely time-giving devices, but vehicles of creative expression. And that creative expression can sometimes come from without the industry.

Because why not fashion, when watchmaking has already collaborated numerous times with the art world, the design world, the sports and entertainment world, the aeronautical world. The automotive world, the worlds of architecture, gastronomy, sustainability and the environment, the travel and tourism world…

Like luxury watchmaking, fashion, especially high fashion and haute couture, is all about design and craftsmanship, straddling tradition yet breaking boundaries. The making of an haute couture gown mirrors the work done on a métiers d’arts timepiece. Haute horlogerie is all about details such as finishing and decoration amid time-honoured values like precision and robustness. With couture, the staggering amount of intricate details reflected in the finished piece elevates it from a garment or a watch to a fine masterpiece. In other words, it’s all about the finesse.

And who hasn’t wondered how runway looks would be so much more amazing when they’re accessorised with timepieces and precious jewellery.

But it wouldn’t be fair to say that watch brands have always been resistant to the idea of fashion collaborations.

Brands like Jaeger-LeCoultre stepped one foot into this universe by working with shoemaker to the stars Christian Louboutin, offering Louboutin-designed straps with its ladies Reverso Classic Duetto. Following suit, Roger Dubuis paired a selection of Velvet models with delightfully handcrafted straps by French bespoke shoemaker Massaro. Others include IWC who works with Giuseppe Santoni, albeit mainly for its men’s collection.

So the time cannot be more ripe for watchmaking companies to take a bigger bite of the fashion world proper, and in a year as starved of excitement and positivity as this one, we’re only too happy to soak up all the creativity and good vibes from these latest brand collaborations.

The maker of the Royal Oak is also known for having close ties with the world of contemporary art and its fondness for crossing multiple creative disciplines. Perhaps this was why the dynamic duo behind Ralph & Russo, Tamara Ralph and Michael Russo, were already wearing Audemars Piguet watches before their brands started working together.

Says CEO François-Henry Bennahmias, “The fun part [about the partnership] was when we realised that our watches had already been paired with their exceptional designs many times by clients in real life, who didn’t need to wait for this partnership to match our two brands!”

In addition to the new Royal Oak Selfwinding 34mm which will be worn by models on the Ralph & Russo runway, the partnership has yielded a new Royal Oak Concept Flying Tourbillon in frosted pink gold. An incredibly complicated piece, it is however not just a technical watch. Rather, it’s all about the commingling of technical finesse with design ingenuity, such that you almost don’t notice the tourbillon at all. The stepped dial in brilliant cobalt blue is a reference to Ralph & Russo’s textured couture gowns.

The phrase ‘One of Not Many’ resonates deeply with haute couturier Yiqing Yin, or indeed any artisan skilled in making things by hand. Yin is a prodigy in the fashion world, having been accepted as a permanent member of the Paris Chambre de commerce et d’industrie since 2015. Known for a sculptural approach to fashion, her designs have inspired Vacheron Constantin’s new Égérie collection, specifically her use of plissé, which the manufacture has interpreted through the traditional art of hand guillochage.

Wearing the Égerie in pink gold with moon phase complication, Yin was particularly taken to the poetic expression of time in this model. She muses: “Timelessness, elegance, harmony. These are my starting points and values to be treasured. At the same time, I want to challenge the norm because things are meant to be broken in order to be transformed into something else. To me, the great thing about collaboration comes from breaking all the frontiers of commonly known aspects of beauty.”

Like Yin’s beautifully handcrafted gowns, Égérie provides a source of introspection because it is no longer a timepiece but an art piece. And art is always essential, if not to body, then surely mind and soul.

This would be the second Hublot X Yohji Yamamoto collaboration and this time we’re treated to the Big Bang Camo Yohji Yamamoto. The Japanese designer’s avant-garde spirit translates through Hublot’s flagship timepiece, his love for monochromatic hues respectfully preserved. Although this time, the watch sports a camouflage strap on black ceramic rather than the full black look offered by the first collaborative model, which was a GMT model as well.

A master of contradiction and antagonism, Yohji Yamamoto sees the camouflage motif as the epitome of paradox, present and future clashing strikingly or blending seamlessly. “I am powerfully drawn to a cutting-edge approach, in the sense that it expresses a point of view that is slightly removed from traditional values. Each collection incorporates a message about what I am feeling right now. It is a way to invite people to question what is already there, which is something I value greatly,” says the designer.

Fresh off the press, Chopard worked with Kiton Ateliers on the 100-piece limited edition L.U.C XP II Sarto Kiton. Extra slim and extra elegant, the watch is dressed in black DLC-coated steel echoing Ciro Paone’s motto: “Elegance must be associated with simplicity”. Then you have the Neapolitan tailor’s signature houndstooth motif embossed on the dial and an inviting slate-grey cashmere strap lined with red alligator leather.

Sounds like there’s a lot going on, but it’s also all done very discreetly so all you have is a tiny red accent on the dial symbolising this start of what will definitely be an amazing partnership. Says Chopard co-president Karl-Friedrich Scheufele, “Our partnership with Kiton is an entirely logical move, in that over the years our two family Maisons have proven the excellence of their craftsmanship and their fertile creativity.”

As it’s moderately sized at 40mm, we’d be happy to pair this gent’s piece with Kiton’s FW20 RTW designs any day of the week. 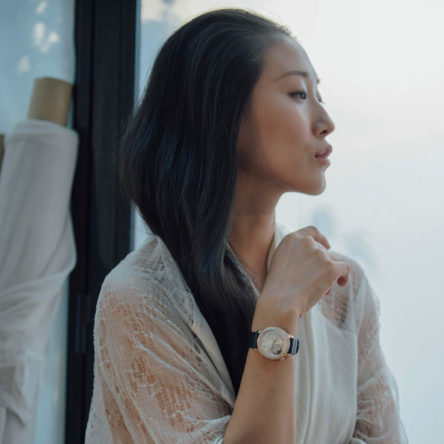