“Next February will be my 15th anniversary, and during that time I’ve been able to work with extraordinary women who I greatly admire,” says Erdem Moralıoğlu. Something of an understatement when you’ve dressed the likes of Michelle Obama, Kate Middleton and Gwyneth Paltrow, but it’s a statement that speaks to his nature. When Vogue joined the 42-year-old Canadian-born designer on the set of his pre-recorded SS21 show, he busied himself offering coffee and tea to the crew between takes.

With his affinity for combining historical and contemporary references, Erdem has established an aesthetic that’s immediately identifiable for its signature mid-century floor-length gowns in an abundance of botanical prints and brocades. This season is no exception: a dreamlike amalgam of 18th-century tailoring, toile de jouy, Grecian prints and hand embroidery, in pink, cream, navy and olive.

Ahead of his presentation, which premiered on the British Fashion Council website on 21 September during London Fashion Week, Erdem revealed his team’s experiences of producing a collection during the pandemic, the trinity of muses that inspired his designs and his hopes for the future of the fashion industry.

How did your interest in fashion and clothing come about?
I’ve always been fascinated by how women looked, walked and dressed. I grew up with a twin sister, so I was acutely aware of someone who was like me and is part of me, but is also the opposite. The power of femininity was something I was always preoccupied with. Eventually I focused on what women wore. All the way from elementary school right up until high school, I was always drawing and preoccupied with the idea of narratives. I grew up in the suburbs of Canada, so there was a lot of dreaming that I had to do.

You’ve got a knack for layering historical references. How do you begin a new collection?
It can happen in so many different ways. The Cecil Beaton collection [AW20] came out of meeting curator Robin Muir and walking through the exhibition [at London’s National Portrait Gallery] early on. The SS20 collection from last year was inspired by a trip to Mexico, where I discovered the images of Tina Modotti. SS19 was based on [the Victorian crossdressing couple] Stella and Fanny, that was from moving to Bloomsbury and seeing a blue plaque [on one of the houses] dedicated to them. My eyes are always wide open.

Tell us what sparked inspiration for SS21.
SS21 was very much inspired by Susan Sontag’s book, The Volcano Lover. It was a gift from a friend and I read it during lockdown. The book is set around a time of upheaval and uncertainty, the characters [British model, actress and lover of Lord Nelson, Lady Emma Hamilton and her husband Sir William Hamilton] were living in the shadow of [Mount Vesuvius]—something that’s much bigger than them. That sense of uncertainty spoke to me and about the current climate.

What details from Susan Sontag’s The Volcano Lover and its characters inspired your new collection?
William Hamilton was a collector of Grecian vases. He was obsessed with antiquity and was also a volcanologist. So I started looking at some outerwear and parkas, as well as nipped-in little jackets that were typical for aristocracy from the 18th century. That inspired the tailoring and the parkas, this idea of traipsing up the side of Vesuvius, which happens in the book. Some of the prints have a Grecian border, which combined with the wallpapering motif toile de jouy, echoed antiquity.

I found an amazing portrait of Emma Hamilton, where she almost looks like she dressed up as a man. She’s wearing a white scarf, the kind that a typical 18th-century man would wear. That image is so inspiring; as if she is almost becoming her [own] lover. A white neck-piece features on most of the outfits.

I was also thinking about Susan Sontag and New York in the 1960s and 1970s. There’s pared-down denim, cotton poplin and a mohair cardigan that’s falling off [the model]. Almost a wonderful contradiction of decadence.

You staged your show at Gibberd Garden in Essex. Why did you choose this location and how did it feel to show to no audience?
There was a natural runway [created by an] avenue of trees. There’s something so beautiful about having an almost-secret fashion show. I didn’t approach it like it was a digital presentation, I wanted to have a runway show but without an audience. Normally a show happens in 10 minutes and it’s just one take, whereas the way that we did it, time was stretched. There’s a wonderful freedom to that.

You used a drone to shoot the film, correct?
Yes, we were able to film it in ways that maybe we wouldn’t necessarily be able to with a live audience. Using as many different tools as possible to create something that felt quite cinematic. The footage feels more like a camera on a crane, as opposed to a drone. We captured strange angles, like between the trees, in slow motion and up close.

You’ve started collaborating with the stylist Ibrahim Kamara. How does his vision feed into your work?
He’s a dreamer and someone who loves to be carried by a narrative and a story. We first started working together on resort [collection] last year and we’ve worked on five collections together now. I admire him and his world, and what he’s created. Working with him is a purely collaborative and creative thing, and that feels so wonderful.

The casting of the show was wonderfully diverse. With fashion finally addressing its diversity and inclusion issue, do you think the industry is still falling short?
There’s definitely so much more to be done. I think what is so important is that there is a dialogue about it, but now it’s about taking action.

What have been some of the biggest challenges for you and your team while working through the pandemic?
The resort collection was created entirely in lockdown. The first part of [SS21] was created during lockdown. There’s something about this strange time that affords a new kind of focus because you spend a lot more time by yourself. With that comes the challenge of not being with my team and working with them. It’s been an incredibly challenging time, but to look at this body of work that we were able to create in the circumstances is amazing.

You’ve dressed some incredible women over the years. Who have you enjoyed working with recently?
For American Vogue’s September issue, we dressed Aurora James, who is extraordinary.

What are your hopes for the future of the fashion industry?
It’s interesting how the situation has forced us to think about other ways of communicating [fashion], these methods can be as beautiful and valid [as a show]. But for me, there’s just something wonderful and tangible about a live event. It’s so important and critical to what we do.

The excess and travel inevitably has to change. Even since reopening my store in Mayfair [earlier in the summer], it’s interesting to understand how my customer is changing. What we all want is evolving. I don’t think we’ve ever seen such a gigantic reset. 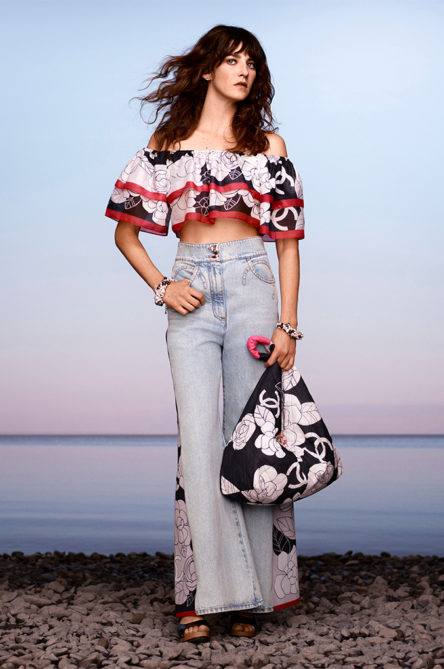