Michael Halpern is using fashion to send out an unequivocal message this season, starting with what he is wearing. When we meet at his south London studio, he’s dressed in a ‘Biden Harris 2020‘ T-shirt. “I’m here to give you a preview of my SS21 collection, and to remind you to vote,” the 31-year-old designer says with a smile.

Rather than stage a show for London Fashion Week, Halpern decided to pay tribute to the frontline workers who have protected others from the pandemic, and put their own health at risk in doing so. In a buoyant film that premiered on the British Fashion Council website on 18 September, medical workers, care workers and cleaners modelled Halpern’s unabashedly glamorous creations and, through interviews, revealed what life has looked like for them in recent months.

Halpern, who is originally from New York, moved to the British capital almost a decade ago to get his masters in fashion at Central Saint Martins. “As an American living in London, you see that the National Health Service [NHS] is such a huge part of the culture,” he explains, before launching into the story behind the presentation.

Read more: “Having limitations can be healthy and creatively inspiring”: Molly Goddard on the opportunities to be found in creating a collection in lockdown

How did you get the idea to shoot your SS21 collection on frontline workers?
One of my closest friends, Ghalia, works as an [obstetrics and gynaecology] surgeon in London and she was telling me about how people from all walks of life were starting to volunteer, so I signed up. I made PPE with a woman called Caroline Gration who set up a workroom at the Royal Brompton Hospital after [Vogue’s] Sarah Mower introduced us.

It felt antiquated to do a runway show right now. We had an opportunity to make a collection and show our support for these frontline workers by giving them a great day, to get dressed up and have their hair and makeup done. The concept wasn’t a grand idea, it just made sense.

Who are some of the women featured in the film and how did you find them?
We reached out to Transport For London, the National Health Service and Home Care Plus and it grew from there. There’s Arianna, a senior ICU nurse at Homerton Hospital; Odiri, a train line manager and Latifah, a train operator for the London Underground; Aziza, a bus station manager; my friend, Ghalia; Caroline, who I worked for as a PPE volunteer; Sarah, a domestic services staffer, and Chevonese, a healthcare assistant for Kare Plus Croydon who works with the elderly. Behind the scenes, fashion journalist and medical researcher Kin Woo helped us develop the interview questions.

What was the overall atmosphere you wanted to create through the film and photoshoot?
It’s about having fun—I didn’t want to do fantasy and ignore what’s happening in the world. Fashion should prop people up and give people a break, especially when they’ve been having such a terrible time.

Shona Heath [who designed the set] wanted it to feel really colourful, overly fabulous, joyous. So she painted everything by hand and brought balloons, giant bouncy balls. We needed a big space to be able to capture each look in front of a different coloured background.

From the Shona Heath-designed set to Patti Wilson on styling and the Michel Gaubert soundtrack, you have a strong creative community. How did some of these collaborations form?
This is my fourth year running Halpern. It started with meeting Patti when I was working at Atelier Versace. Then Patti introduced me to [hairstylist] Sam McKnight and he did our first show. [Movement director] Stephen Galloway introduced me to Shona. And Isamaya Ffrench has been doing our makeup since our second season. I had no budget, but everyone got on board to help and we became really close.

Has presenting your collection through the medium of film made you rethink how you do shows from now on?
Don’t get me wrong, I love fashion shows. I started my career at Versace where the shows are so energetic, emotional and glamorous. In the beginning, I was concerned about how I was going to show the collection, but out of that comes really creative ideas. There are so many other ways you can showcase your work.

Making a film is so complicated, right down to the soundtrack. I was choosing songs I love from the 1970s—Redbone, Elton John, Prince—until the director Minnie Carver told me the rights were so expensive for one year, and then you have to take the film down. Thankfully, [sound designer] Michel Gaubert came on board and we found some good upbeat disco among the terrible samples of elevator music.

There are some ambitious silhouettes this season—bubble dresses and giant plissés that fan across the body—as well as lots of embellishments. What were the biggest challenges of creating these looks?
I like to drape so I always start in 3D— the bubble dresses begin on a mannequin in white [toile] fabric so I can see the shapes. Italy reopened quite early so we were able to finish making all the fabrics we were developing before lockdown. We don’t tend to buy stock fabric—we design and make everything including the prints.

With the embellishments, we focused on things we could do in the studio. We developed techniques in house — for instance, we spent a week figuring out how to stitch feathers on to a dress with satin ribbon in a crazy pattern that makes the feathers stand up. I still wanted to make a really over the top and spectacular collection, without having to send samples to France or Italy. I like to limit the number of packages we send anyway, it’s wasteful.

Not everything has to be on such a huge scale. You can find ways to make impactful collections without spending a ton of money and making 50 looks.

How have you maintained communication with your team throughout the pandemic so far, especially during lockdown?
We have a full-time team of seven in the studio and it’s a relatively big space so we can socially distance well. I spent a few weeks by myself draping and developing the collection and doing lots of calls—I hope I never have to use Zoom again. It takes longer to show someone how you want something draped over WhatsApp, for instance, so I’m grateful to be back in the studio.

Many of these looks feel like they are destined for the red carpet. Who have you enjoyed dressing the most since you established Halpern?
Marion Cotillard is the epitome of French cool and she’s the coolest mother. In 2017, she took me to the Cannes Film Festival for my first fitting with her, right after she had her youngest child.

Did you have any particular women in mind when you were designing this collection?
I tend to focus on a few people each season. SS21 wasn’t really about that. It was more about the techniques, shape and optimism. And colour—I’d never normally put forest green with bright red, but somehow it works.

Donatella Versace is something of a fashion godmother to you. What are some of the greatest lessons she’s taught you?
Donatella’s very Italian in that she runs her company like a family and treats everybody with love and generosity. I’ve modelled my own business after her.

From a technical point of view, I left Central Saint Martins at 27 and went straight to Atelier Versace. I was working on couture rather than ready-to-wear so it’s where I learned the bulk of what I know; techniques—for example, ways of binding plumes—that you’d never imagined was even possible. 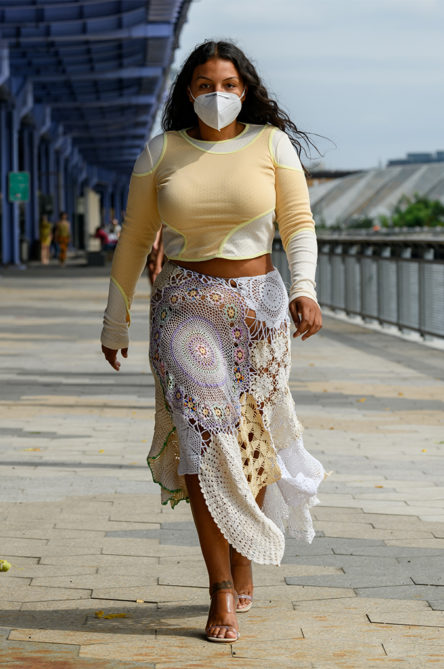 “We’re used to it, but we miss each other”: Eckhaus Latta on designing and showing a collection while 3,000 miles apart 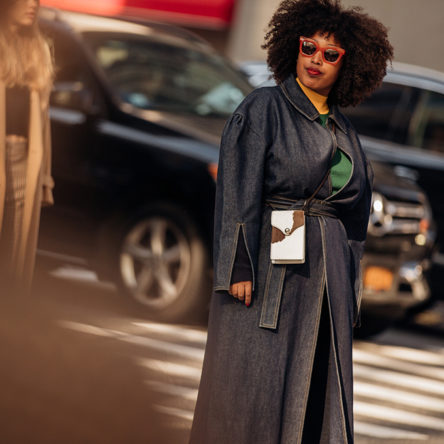