CODA has been breaking boundaries since it bowed at Sundance at the start of this year. Siân Heder’s moving coming-of-age saga about a teen torn between family obligations and her own ambitions was met with rave reviews, acquired by Apple for a record-setting $25m, became the first movie in history to win all of the festival’s top prizes in the US dramatic category and is poised to head into 2022 as a leading Oscar contender. It may come as a surprise, then, that in some ways the film is a rather conventional high-school comedy—it features a spirited best friend character, a blushing crush and a flamboyant, encouraging music teacher—but in other ways, it’s far from it.

It centres on a child of deaf adults (CODA) named Ruby and played with sensitivity and heart by the captivating Emilia Jones. Growing up in the small town of Gloucester in Massachusetts, she’s the sole hearing member of her deaf family and prides herself on helping her parents (Marlee Matlin and Troy Kotsur) and older brother (Daniel Durant) with their struggling fishing business. Everything changes, however, when she joins her school’s choir and discovers a passion for singing that could send her to the prestigious Berklee College of Music in Boston. It’s a path that bewilders her clan (“If I was blind, would you like to paint?” her mother asks her), but Ruby slowly realises that, despite her sense of responsibility, she can’t stay behind and act as their interpreter forever.

The result is a charmer with as many laugh-out-loud moments as tear-jerking monologues, and in a sea of remarkable performances, Jones effortlessly holds her own. The 19-year-old Londoner has been acting since childhood—on stage in Shrek the Musical (2011), alongside Rosamund Pike in What We Did on Our Holiday (2014) and, most recently, in the Netflix supernatural horror Locke & Key (2020 to present)—but CODA has been her breakthrough. Her next move? Taking on the lead role in the upcoming adaptation of Cat Person, Kristen Roupenian’s fascinating 2017 short story about a college student and an older man that went viral after being published in The New Yorker.

Ahead of CODA’s arrival in cinemas and on Apple TV+ on 13 August, Jones talks to Vogue about singing live on set, heading off on a fishing boat with her co-stars and making real-life CODAs cry.

I have to admit that I was crying by the end of CODA. Has that been a common response?
It has! [laughs] I’m glad that people are laughing and crying. So, for CODA, I auditioned and then Zoomed Siân [Heder, the film’s director]. She said, ‘I know you don’t have an ASL [American Sign Language] background, but if I send you a video of my friend signing this scene, can you copy it?’ I was like, ‘Sure!’ I love a challenge. I stayed up until 4am working on it. I found out a couple of weeks later that I got the part. I couldn’t believe it! Roles like Ruby don’t come along very often.

Hundreds of girls auditioned to play Ruby. Was it daunting to go in knowing that, as well as how much preparation would be required, from learning ASL to singing?
Siân told me before we started filming and I was like, ‘Oh my goodness,’ [laughs]. The minute I got the part, I went into ASL training and singing lessons. I trained for eight months. They found me an amazing deaf coach who taught me ASL, but also about deaf culture and the nuances. On set, Anne Tomasetti was my ASL director. She really pushed me and I love her for it. Sometimes things would change on the day, as they do on any other project, and she’d never say, ‘Keep yours the same.’ She’d be like, ‘You change too,’ and we’d be signing over the craft table. There was also improvisation on set. As time went on, I became more confident and because I wasn’t allowed to use an interpreter on set—I had to sign and keep up with conversations—that helped me improvise.

The music part of things was a tiny bit daunting. I’d never had a singing lesson. I auditioned with a gentle cover of Landslide by Fleetwood Mac on my guitar. It’s not a big song and I didn’t belt it, but when I turned up for my first singing session, my teacher said, ‘They want you to sing Etta James, Christina Aguilera and Aretha Franklin.’ I wouldn’t have chosen those songs, but she helped me grow and gave me confidence. All the singing in CODA was recorded live on set, so she also prepared me for that. Siân wanted it to feel as authentic as possible.

What did you take away from your early discussions with Siân about Ruby as a character?
She’s complex. CODAs often feel like they’re the communication bridge between the hearing world and the deaf world, but don’t belong to either. They sometimes feel like it’s a burden, but they wouldn’t have it any other way. They’re protective over their family. There are so many mixed feelings and I think Siân wanted to make sure no beat was missed. At school and when she’s singing, Ruby is shy and insecure, whereas when she’s interpreting for her family, she’s confident and powerful. It’s kind of like playing two different characters in one. Most of our interpreters on set were CODAs, so it was great because they’d constantly be giving us their opinion. When we did a scene that was more emotional, sometimes the CODAs would be crying. Siân would be like, ‘OK, we got it right. It’s truthful. People are going to relate to this.’

“CODA is a strong example of representation done right. Deaf actors play deaf characters who are fully realised and not defined solely by being deaf”

You had incredible scene partners in Marlee Matlin, Troy Kotsur and Daniel Durant. Did you get a chance to bond before filming began and what did you learn from working with them?
The first day I met Troy and Daniel was when we went out on the fishing boat prior to filming. It was a great bonding experience. It’s like when you’re learning a language—until you go and live in the country, you don’t really learn the nuances. When I worked with Troy, Marlee and Daniel, I was always watching the little things they did. Doing a scene with every single one of them was like a masterclass. I learned so much—not just ASL, but how to internalise a range of emotions. We were filming in Gloucester, Massachusetts, a tiny fishing town, so we were kind of on our own. Marlee’s an amazing cook so on the weekends she would invite Troy, Daniel and me over for dinner. We’d watch football and play games. I’ve honestly never felt so close to cast-mates before.

How do you hope audiences will react once the film comes out this summer?
CODA is a strong example of representation done right. Deaf actors play deaf characters who are fully realised and not defined solely by being deaf. That’s different to see on screen and I hope that people watch the film and want to learn more about this amazing language. Some of my friends who’ve watched the film are suddenly like, ‘There’s this deaf woman that works at the shop. How do you sign this? I want to be able to communicate with her.’ CODA is also a feel-good crowdpleaser, so I hope people enjoy it and that, in Hollywood, people can make films like this more often.

Up next, will we see you in Netflix’s Locke & Key and the big-screen adaptation of Cat Person?
We filmed seasons two and three of Locke & Key back to back, so I’m deep in season three at the moment. There are lots of twists and turns! Then, I have the film to do afterwards in New York. I can’t say much, but I’m super excited. It’s going to be a challenge.

How have you spent the past year-and-a-half when you haven’t been working?
I’d been working for a year, then lockdown hit and it forced me to go home. I hadn’t seen my family in a while and I’m really close with them, so it was nice to be in one place. We just had movie nights and dinners. I carried on with ASL lessons, watched lots of TV—Normal People [2020], How to Get Away with Murder [2014 to 2020], Euphoria [2019 to present]—and played guitar.

Do you have plans to keep singing? It would be great to see you in a musical.
I love singing and I’ll continue for sure. I did a musical when I was about eight, but I can’t remember much about it [laughs]. I’d love to do one. West End, call me! 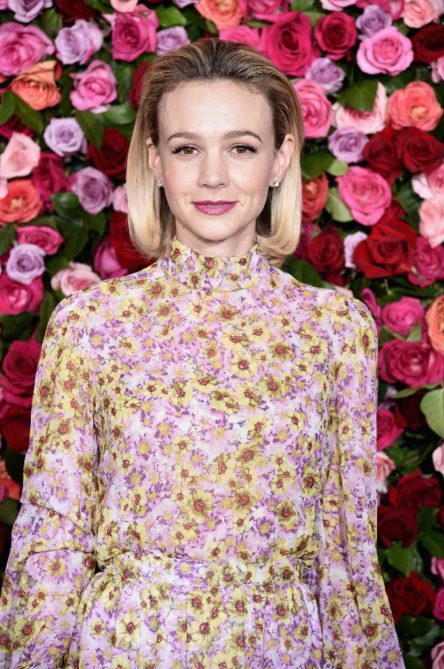