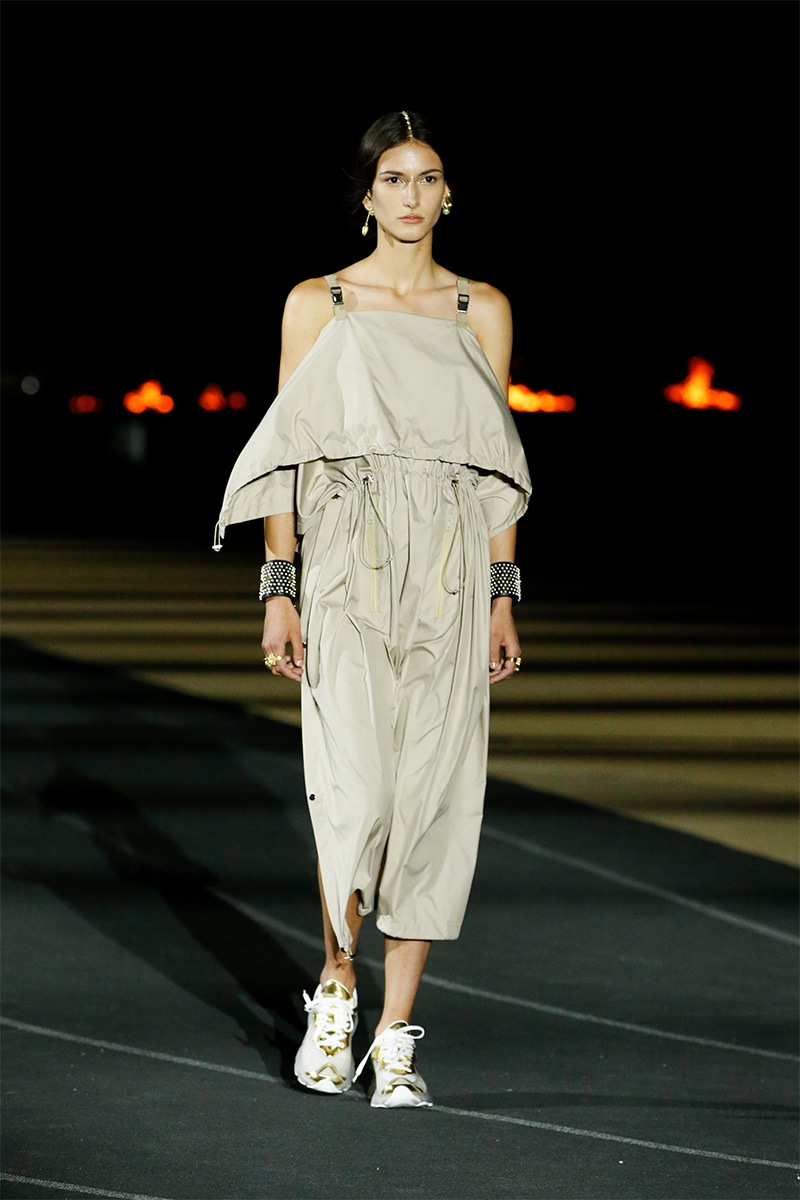 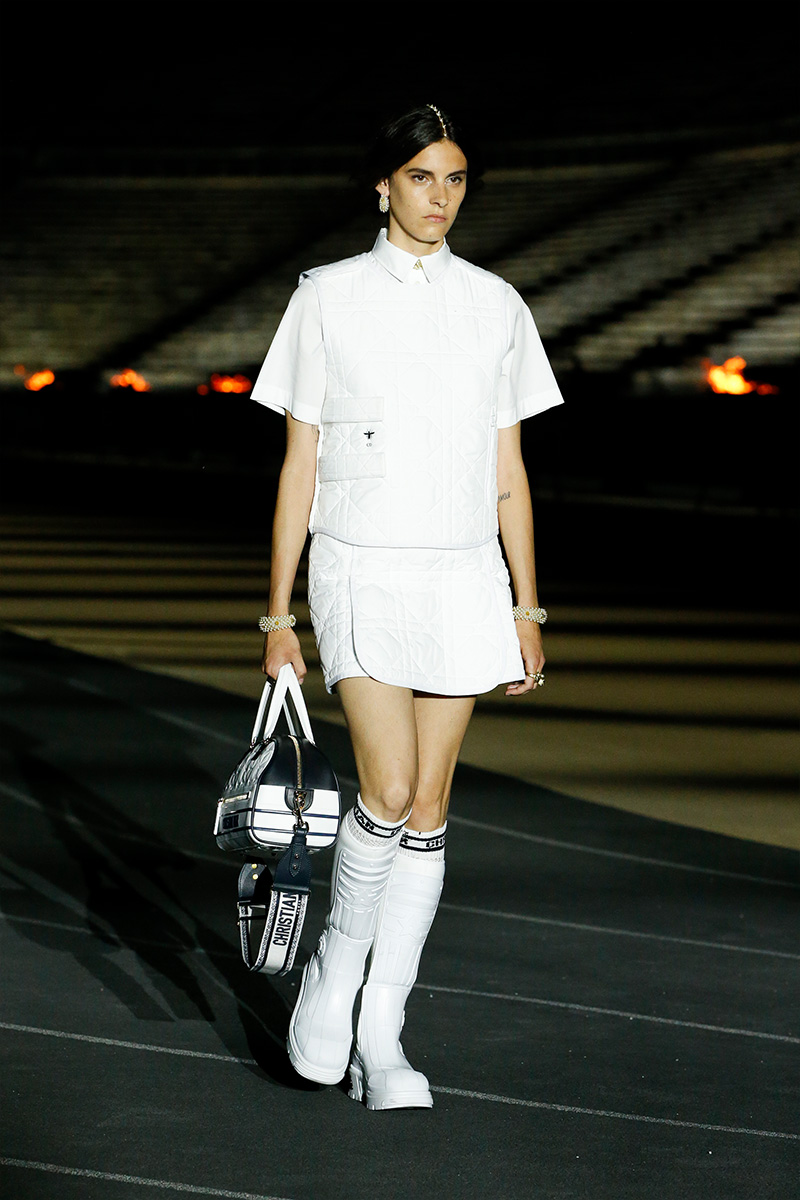 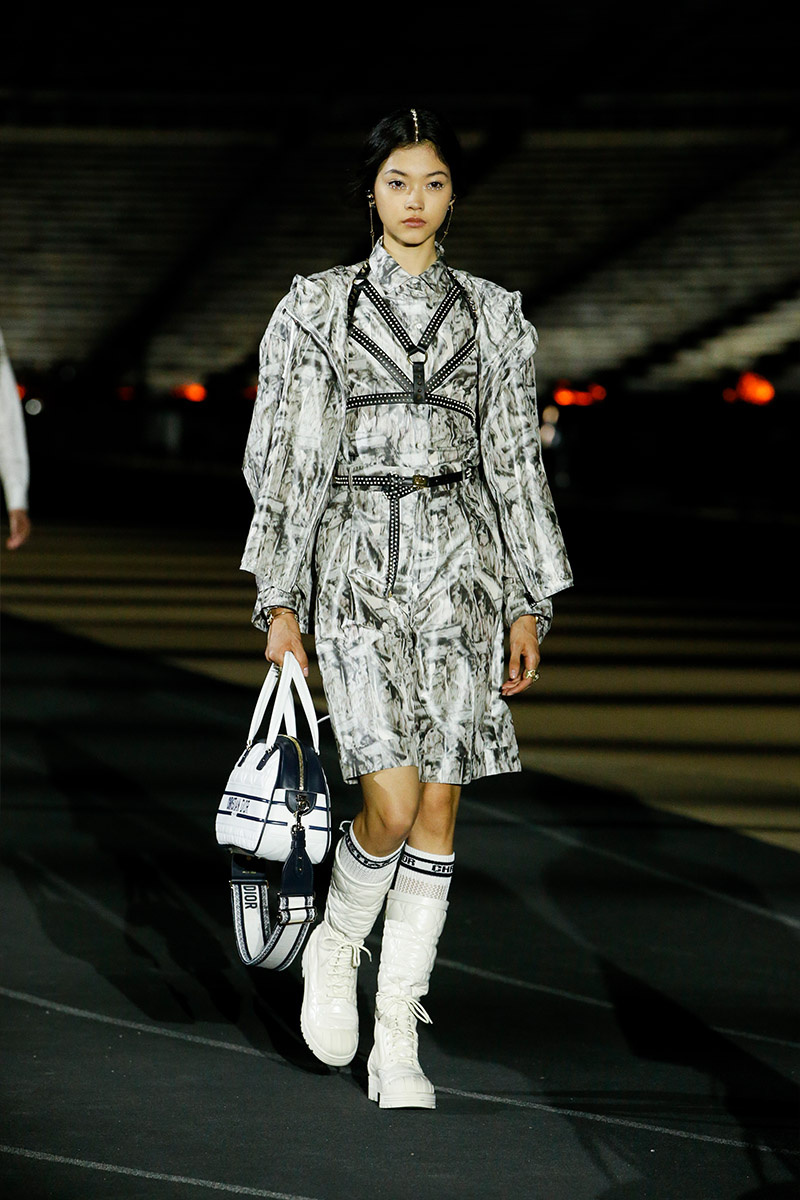 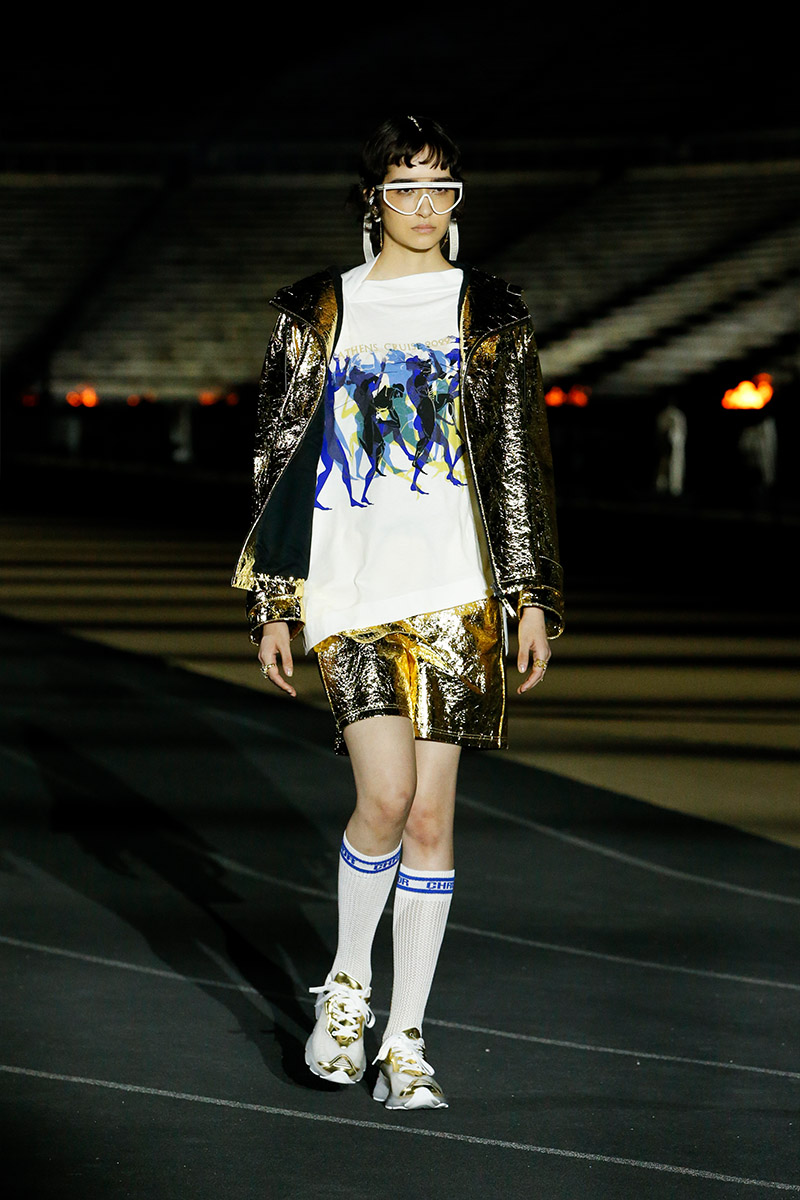 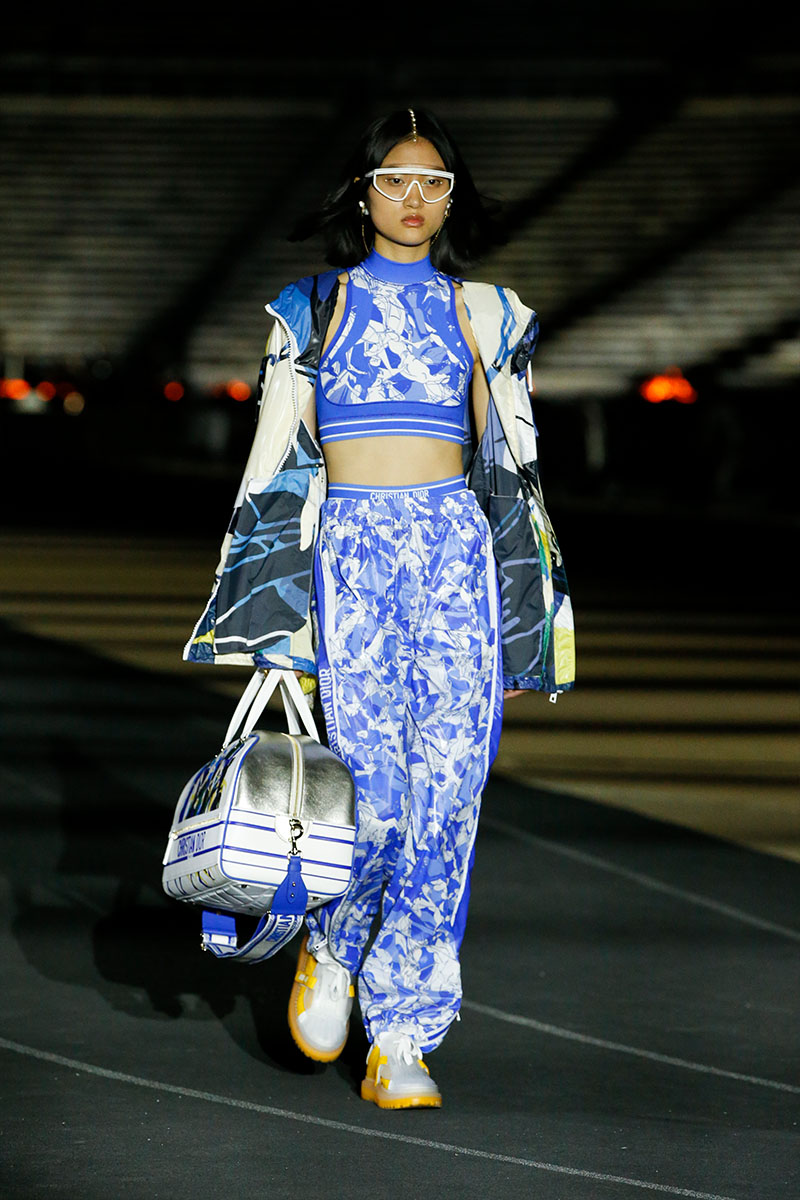 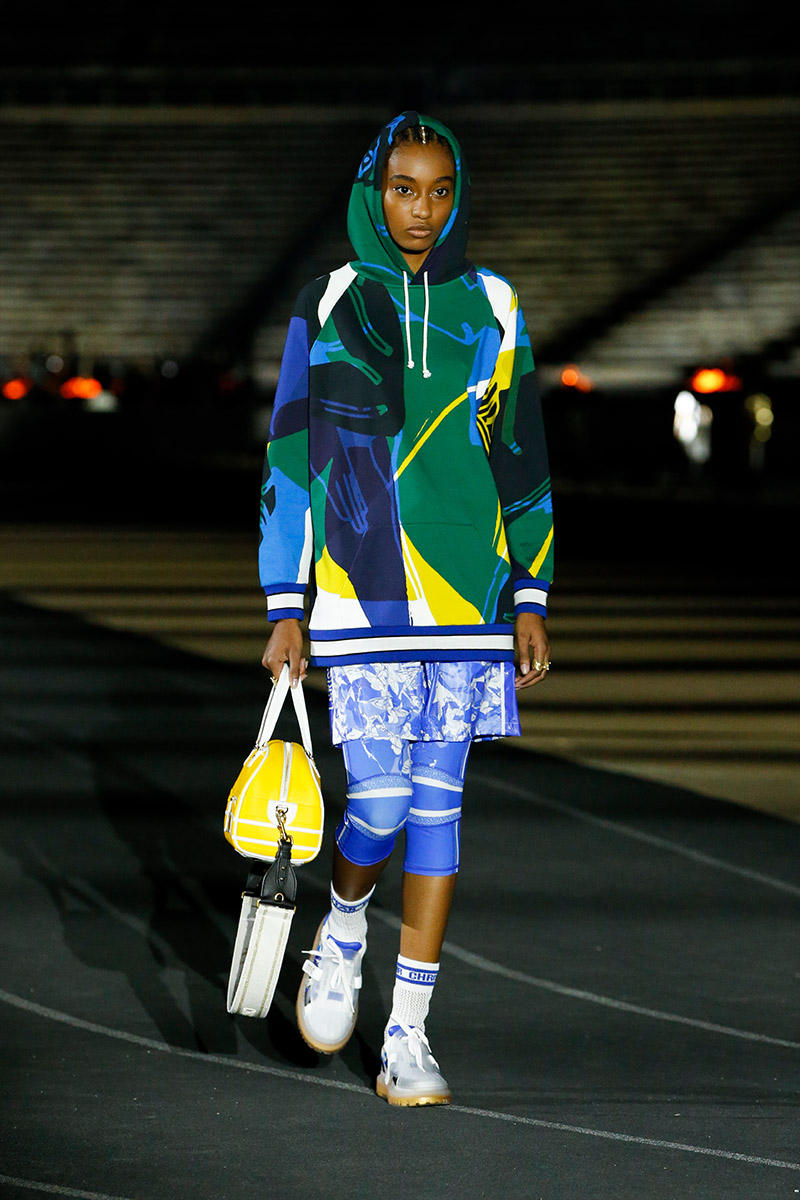 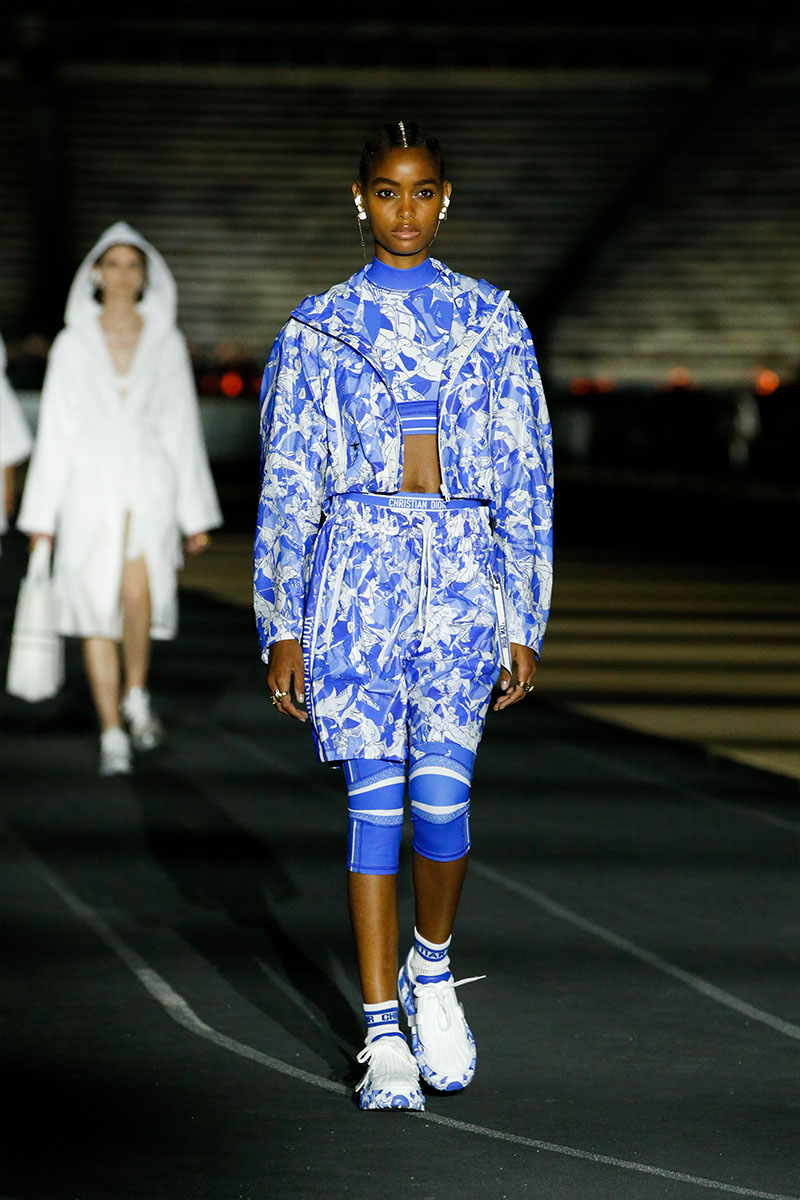 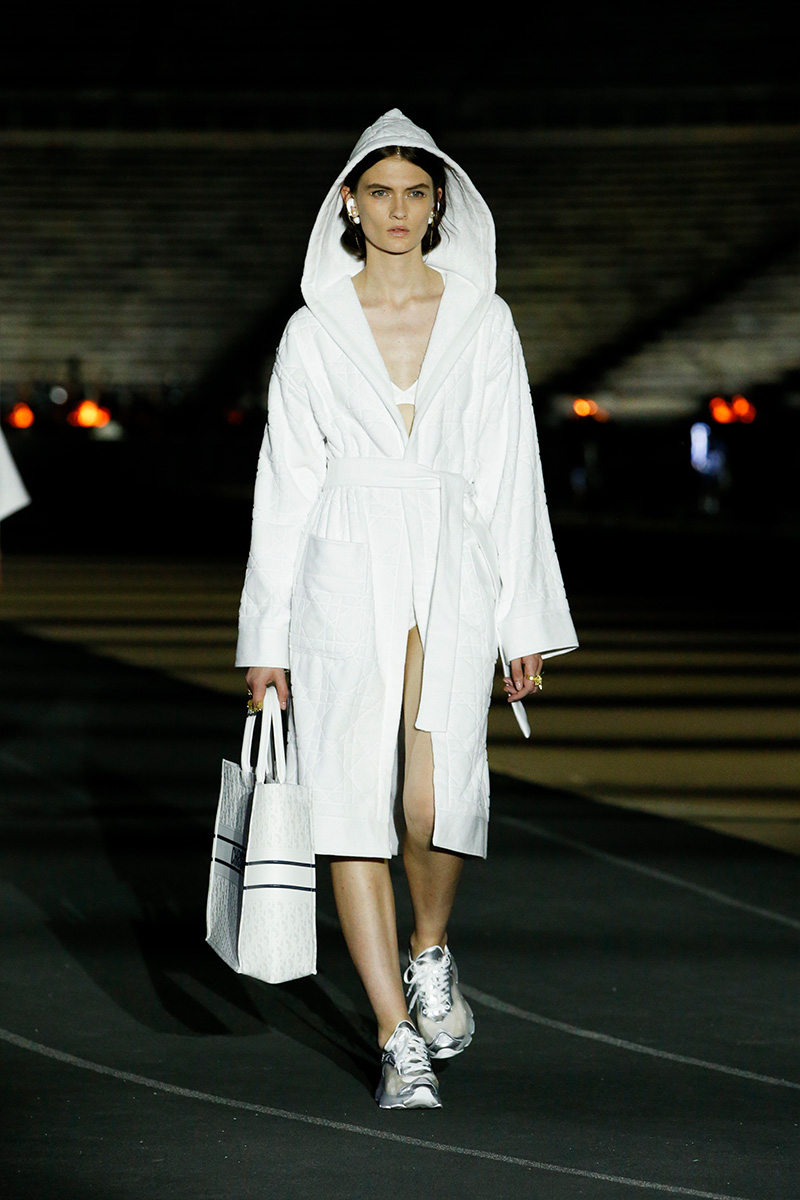 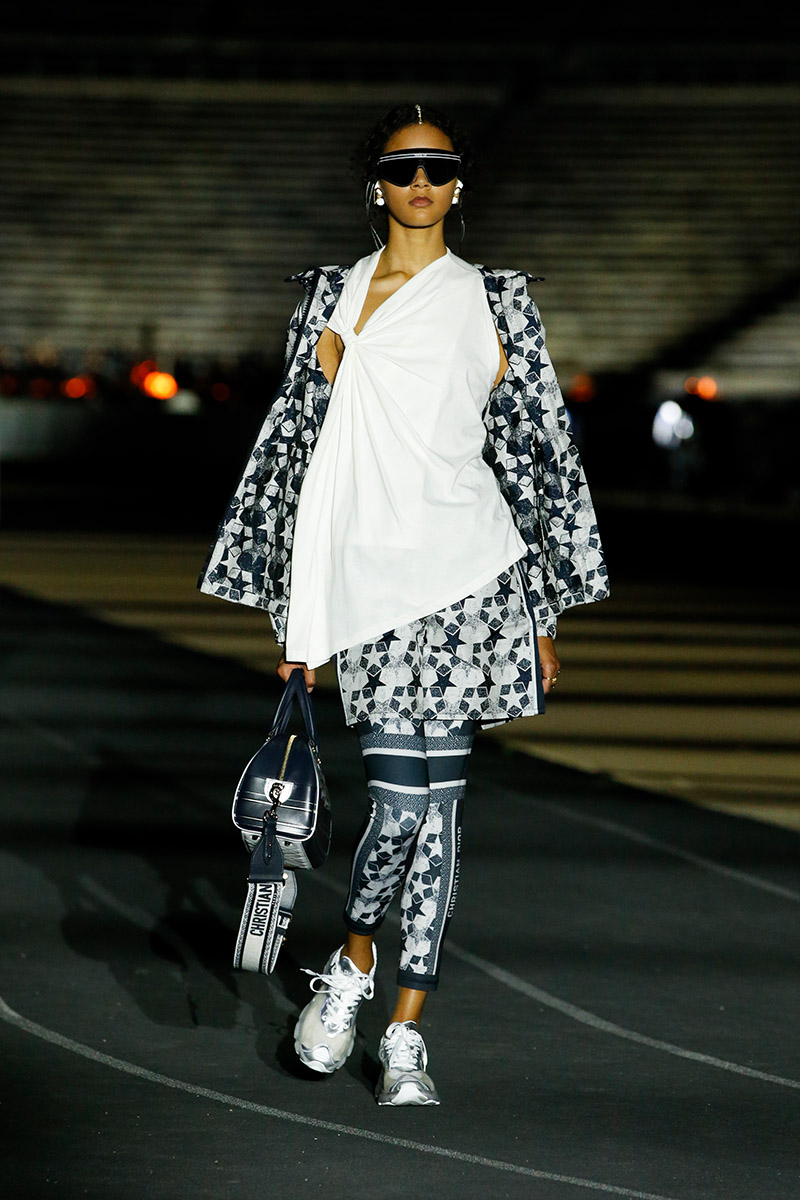 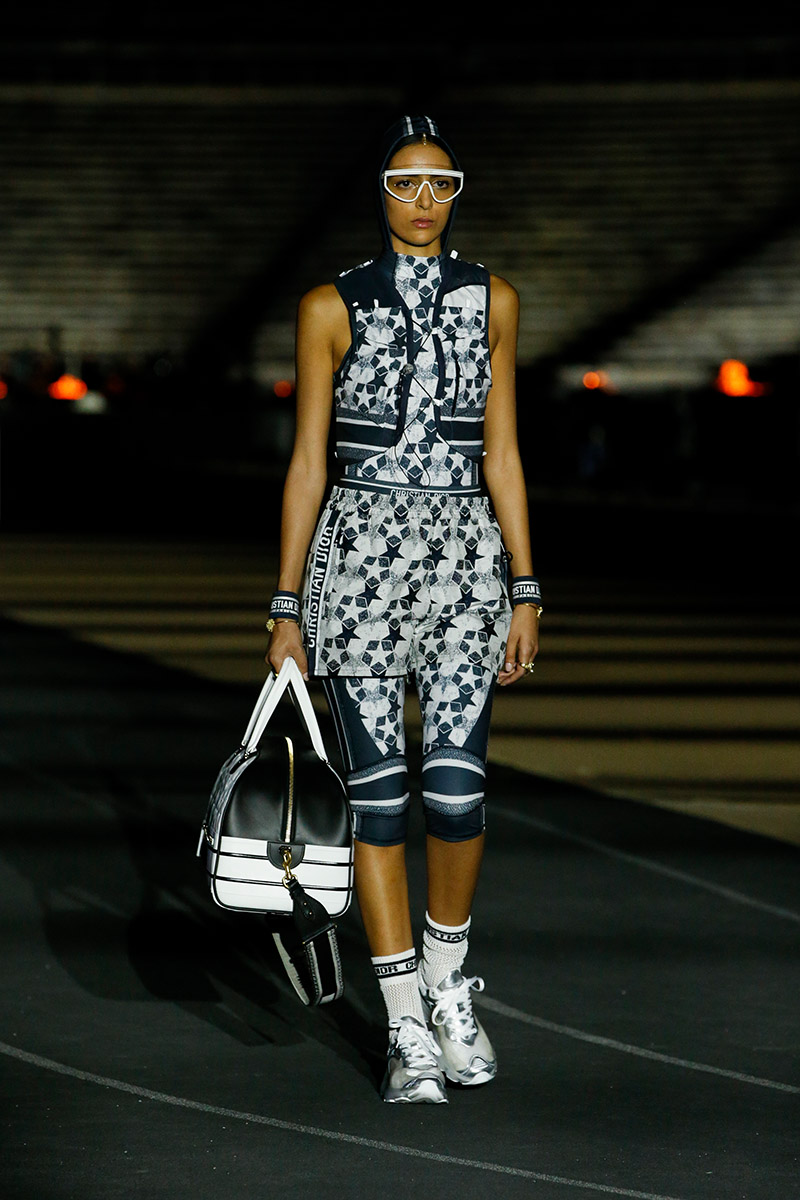 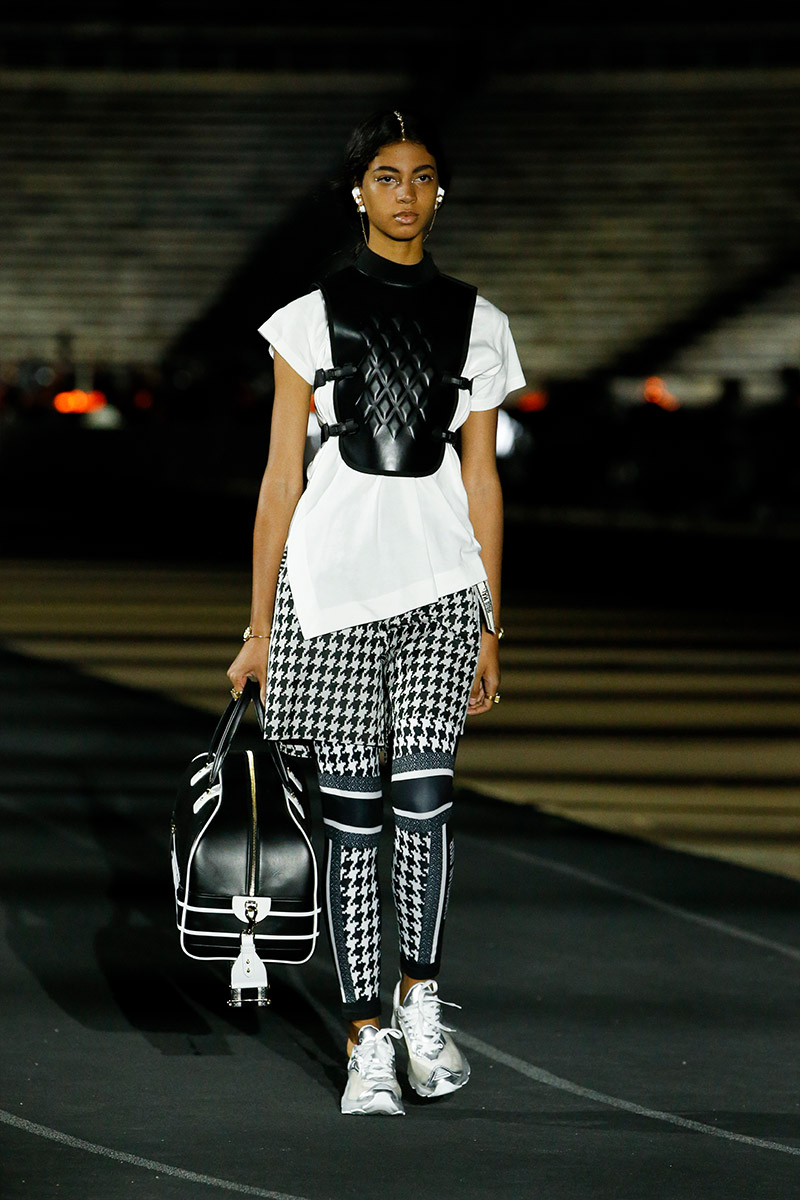 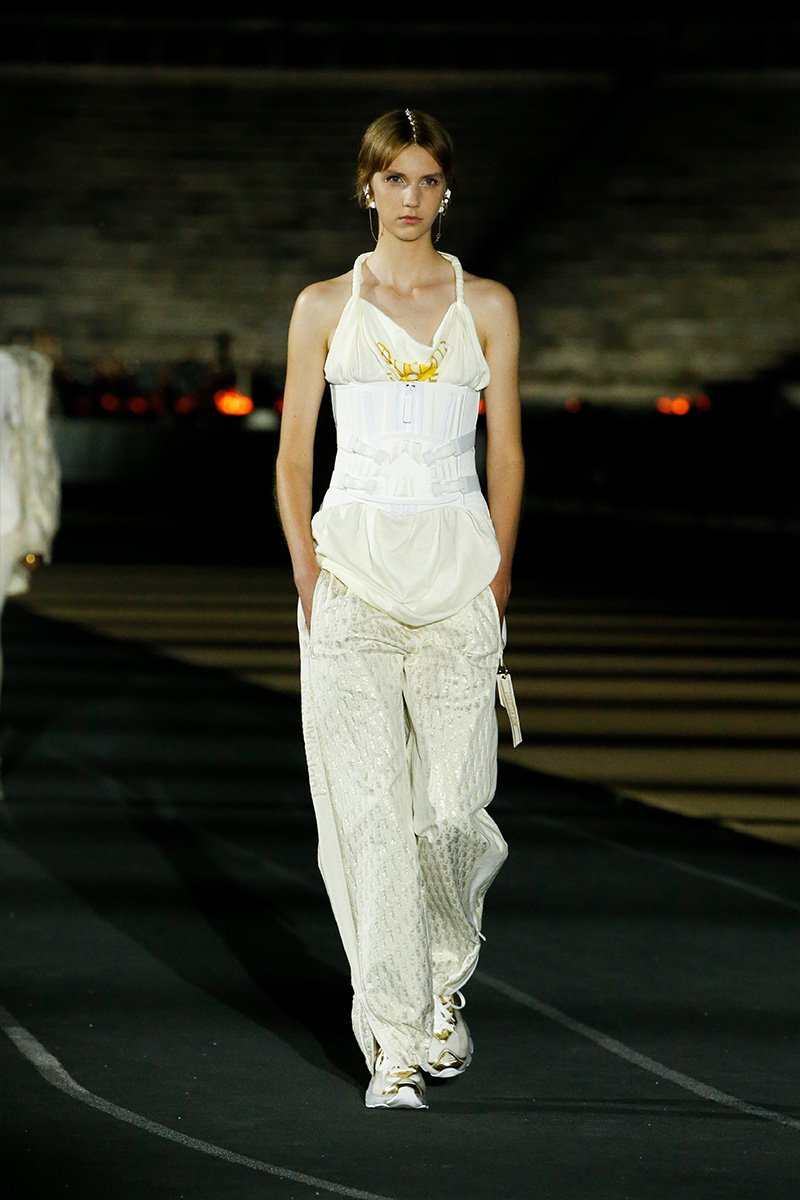 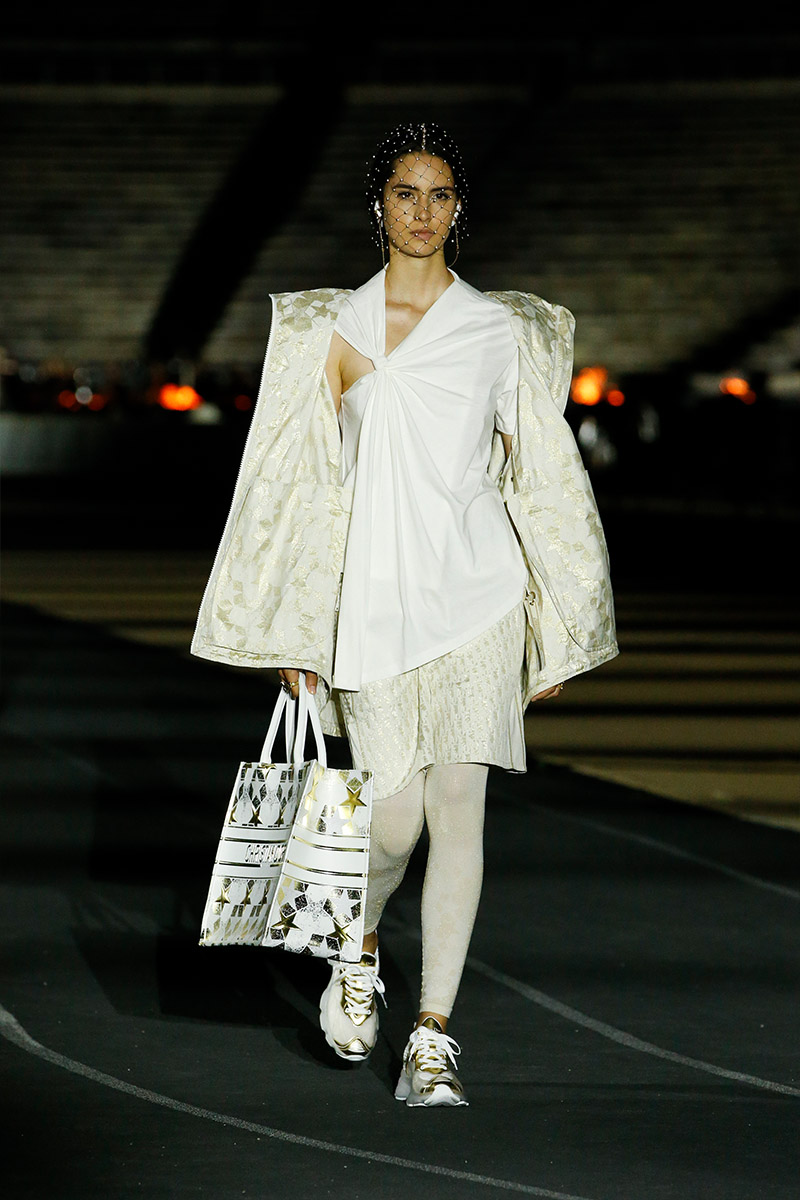 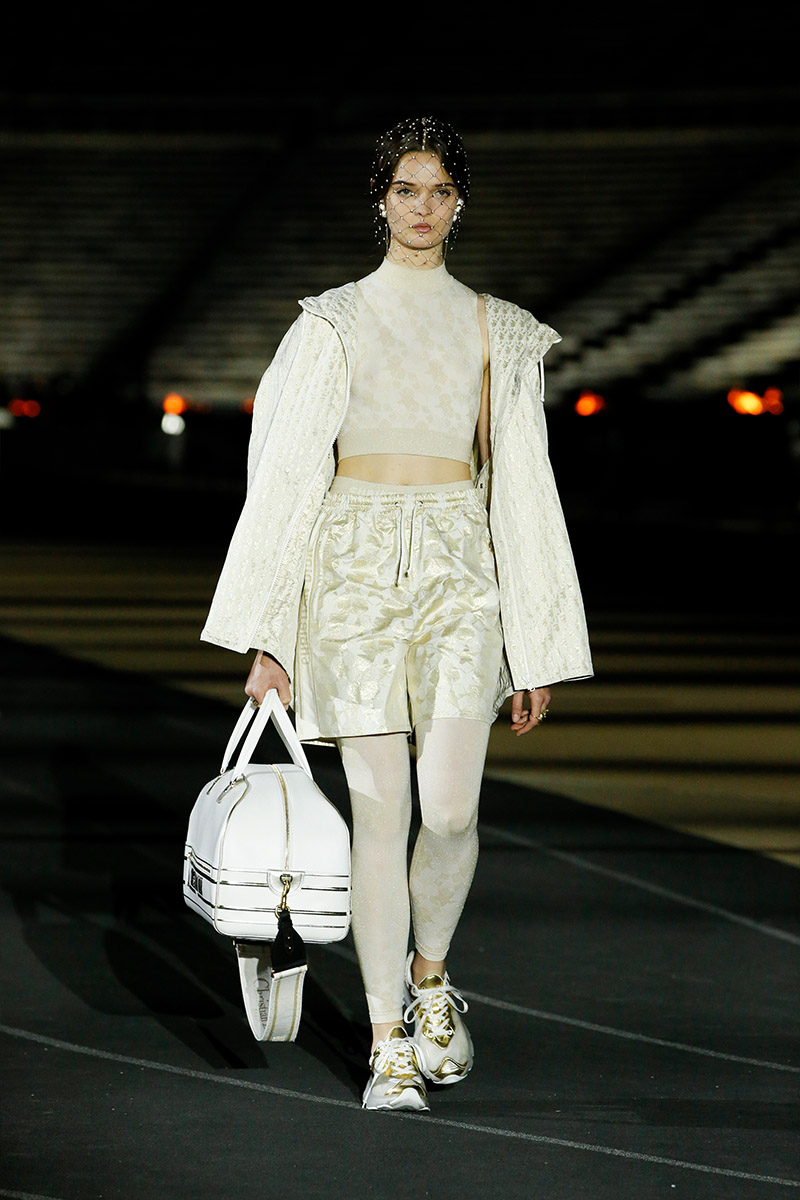 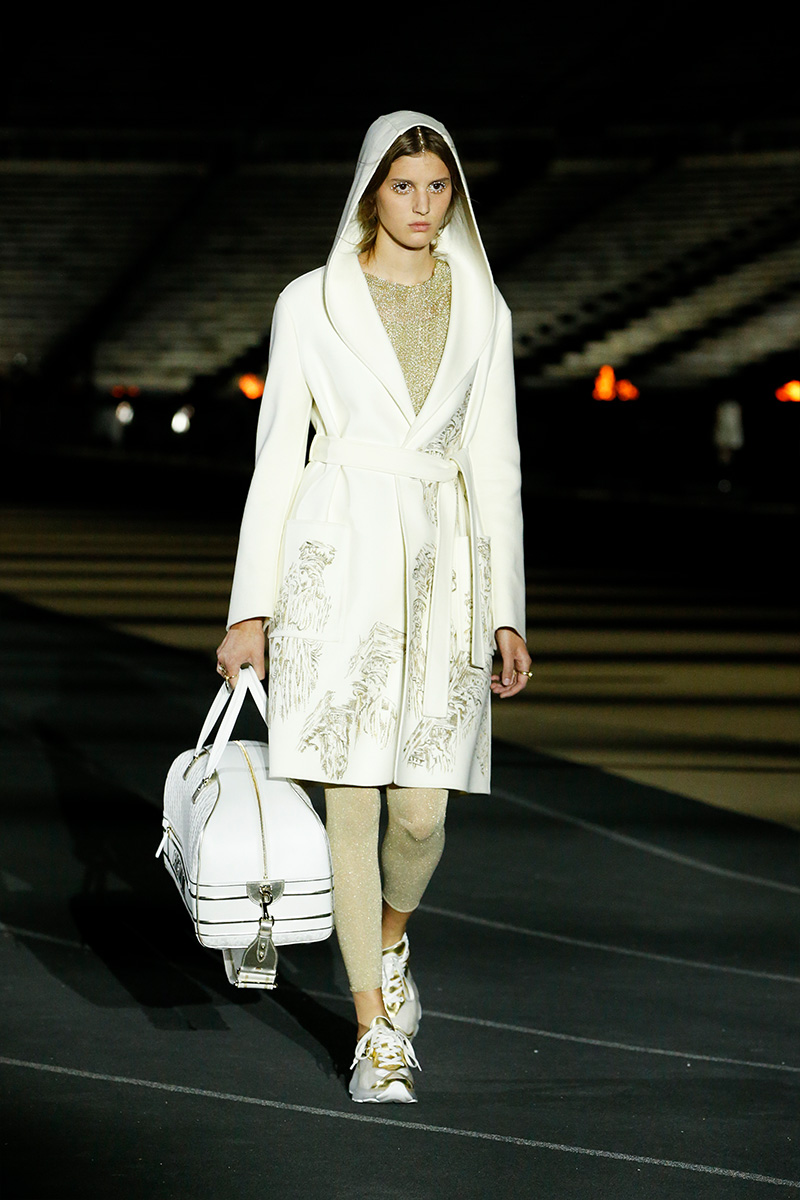 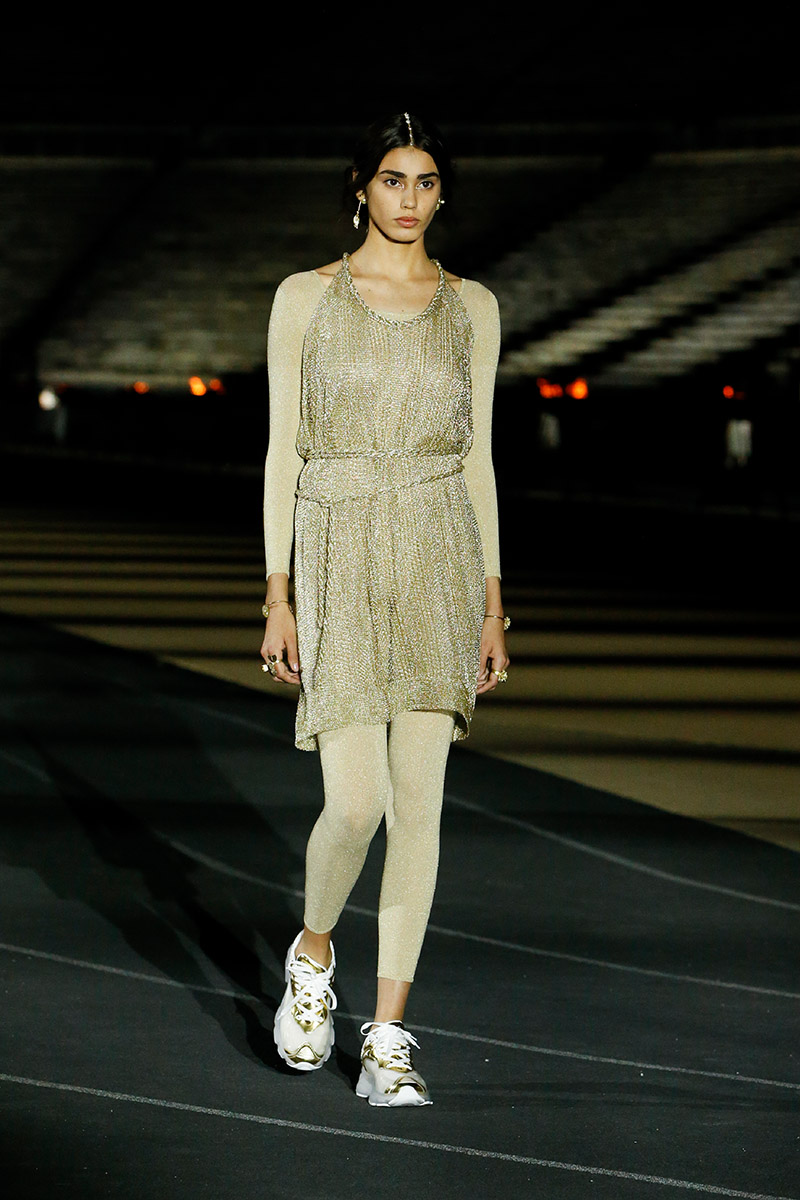 When a lockdown whim compelled Maria Grazia Chiuri to rearrange the furniture in her Paris apartment to make space for a pilates machine, she was responding to an instinct as old as time. “Sport is movement, sport is freedom. During lockdown, you would walk around your building just to get a sense of moving your body. That became our idea of freedom,” she said on a video call from Athens.

Her confinement reflections took her Dior Cruise 2022 show to a birthplace of sports, the Panathenaic Stadium, where Ancient Greeks worked up a sweat circa 330 BC. “I decided to show here because I’m interested in clothes as a way of giving freedom of movement,” Chiuri explained, echoing our post-pandemic desires. A reminder that restrictions are by no means history, ongoing travel complications meant that her show was largely attended by local press and clients, who were treated to a Greco-electro performance by the Greek-American singer Ioanna Gika.

In her first focused study of sportswear, Chiuri bridged the technical properties of the sporty genre with the couture-informed craftsmanship normally viewed as its polar opposite. Clean, cream activewear walked the stadium’s 185-metre laps, occasionally interrupted by sweats elevated with abstract prints. Searching for a tailored answer to that same feeling, Chiuri paid homage to Marlene Dietrich’s white suit, a reference prompted by an old photograph of the icon dressed up as Leda (who made her own cameo in a Björk-tastic swan dress at the end). Chiuri exercised her de- and reconstruction of Christian Dior’s old tropes, athleticising the Bar Jacket by removing its lining and sportifying its fabrication. For all its oversized white trainers, this wasn’t really about sportswear, though, but about the desires that make us adapt sporty cuts and fabrics into our everyday wardrobes.

Part of a new generational spirit is a lack of patience with complicated fashions. Instead, young people imbue conventional dress codes with an expectation for comfort and ease. That territory is a walk in the park for Chiuri—or make that a sprint! Values of functionality, movement, and comfort are ingrained in her cultural inheritance and her practice at Dior. “I come from Roma, don’t forget. Around me, the reference of Greece is everywhere, on every statue. It’s my background,” she said. Those genetics were never more pronounced than in the peplos dresses that epitomised the collection. They are a constant in Chiuri’s work, but at the Panathenaic Stadium she found the most authentic stage to examine just why she loves this most original garment—the mother of all dresses—so much. She worked the peplos that opened the show like a parachute dress, sportifying it with drawstrings and drawing a contrast to the classic Hellenic dresses that closed the show.

Tackling her destination show, Chiuri said she wanted to avoid Greek clichés. As part of the exhaustive studies that underpin Dior shows like these, she toured sites from Knossos to Delphi in search of authentic approaches. She found her answer in the community collaborations that traditionally weave through her destination shows, inviting a string of local artisans to work on the collection. The tailor Aristeidis Tzonevraki created a Book Tote and a Bar Jacket using a unique method through which the items are structured by way of embroidery. The Soufli-based factory Silk Line interpreted Dior’s houndstooth in silk leggings and shorts using its signature jacquard loom. And Atelier Tsalavoutas Dior-ified caps worn by the fishermen of Hydra since the 19th century.

Asked if Greece and its ancient silhouettes weren’t ideal references for a cruise collection, Chiuri smiled. “Everybody thinks of Greece and Italy in terms of holidays… But our research was really big in terms of the history of Greece. We worked to show how important this time was, not least for the 20th century.” That approach matched her personal history with the country. She first visited on an educational tour with friends after graduating high school, and more recently three years ago on a holiday with her husband. “Only to see antiquities, not the sea,” she clarified, laughing. “My husband can’t stay on a beach. After an hour, he’s done. We have to see something.” Movement, after all, is freedom. 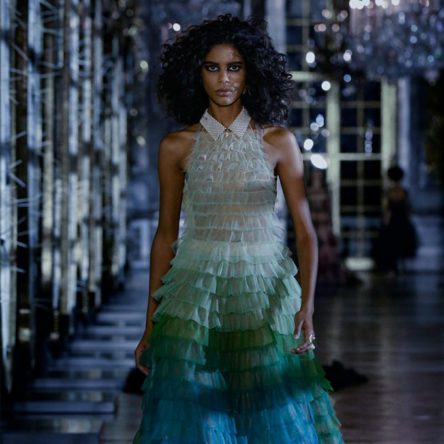 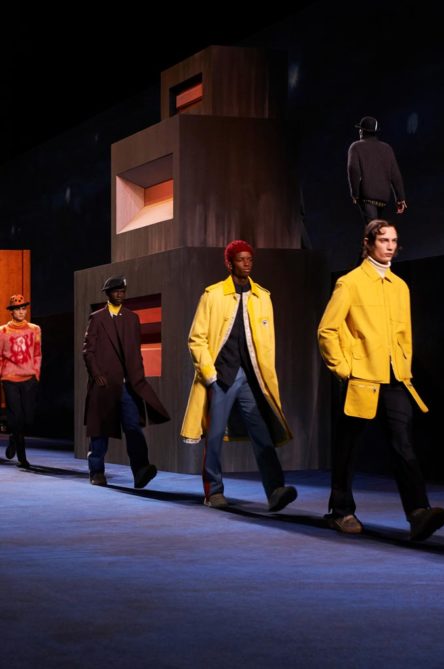 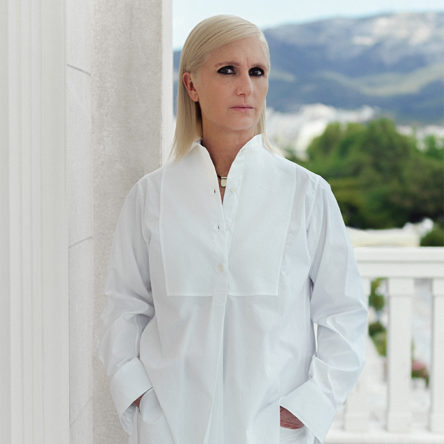