Walking into Christie’s for Brandon Maxwell’s spring runway show was like descending into a glamorous nightclub: white plush carpeting, the designer’s name in neon greeting you as you walked in, and the rooms glowing in an otherworldly blue light. Fitting for a designer that’s known for his party wear.

But then it was showtime, and the sound of birds chirping could be heard throughout. The light changed from blue to a soft yellow. The sun had risen. The first model came out wearing a white tee with horses layered underneath a floral and sequin embroidered cardigan, paired with a silver sequin skirt with a floral motif and topped off with a pink tweed-ish jacket. It’s not that it wasn’t glamorous, but there was just a relaxed feeling about the whole thing, reinforced when the model after that came out in a square sequin mosaic tee with the same horse print in metallic pastels, worn with slouchy, low-rise herringbone trousers, with her hands in her pockets. It was a sophisticated take on Y2k style.

“I’m almost seven years in now, and I’ve gotten older and I think I’ve matured,” said Maxwell backstage after the show. He’s also gotten busier. Along with his namesake label, he has a collection with Fila, plus two collections with Walmart, but he doesn’t feel bogged down by it all. “I think it’s brought a lot of balance, focus, and clarity to my life,” he said. “I’ve been trying to say it in the shows, that I really have been seeking peace and tranquillity.” The designer and his partner recently moved out of the city and “into nature,” as he put it. “And I think that peace and quiet triggers a lot of involuntary memories for me, of growing up in nature when life was so slow, and that has kind of brought a lot of those memories from when I first came to love fashion.”

That time was, of course, the late ’90s and early aughts, of wearing spaghetti strap dresses over white tees—though here the dress was in sheer silk, layered over a white tank. The ease Maxwell was looking to transmit came through loud and clear in a trio of skirts that seemed made from just one piece of fabric draped around the body at an angle and fastened on one side, with a pocket. One, done in the mossiest shade of bright green, was worn with an easy tank in the matching colour. Elsewhere, there were wide leg trousers with lots of zipper details inspired by raver pants, and a cool glitchy floral print that was overlaid on a silk jacquard with a print of the designer’s logo, which was turned into a simple strapless column dress that was ready to walk off the runway and onto a red carpet. The shades of lilac and light green were throwbacks to Hard Candy nail polish colours, and flowers under an early morning mist.

“I just want life to be simpler now,” Maxwell said, and he knows simplicity doesn’t have to be boring. 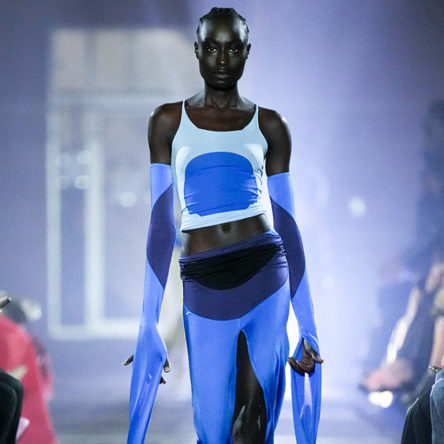 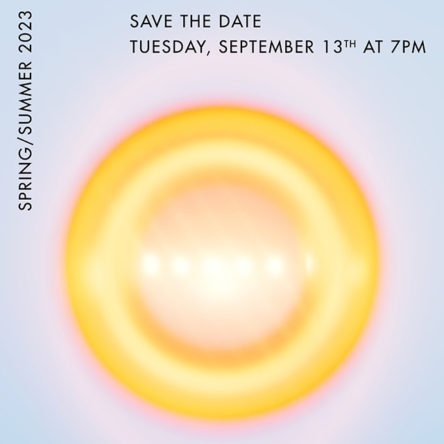