The search for the best hotels in New York City isn’t exactly the easiest endeavour. Why? Because there are so many options—like, 705 to be exact. Even the best attempts at narrowing it down leave choices upon choices. Want to stay in Midtown? Cool, there are 114 hotels in that neighbourhood alone. Plan to splurge on a five-star hotel? Take your pick from over 122! Boutique more your style? Wonderful—Manhattan has 76 independently operated properties with under 200 rooms.

So, we here at Vogue decided to make a shortlist of where to stay in the Big Apple. Some are recent openings, others haute haunts steeped in history. Some are in trendy non-touristy locales, some sit in the heart of it all. Some you stay at for the scene, others are ideal for not being seen at all. But the common denominator among them? They’re all, well, cool.

Without further ado, the best hotels in New York City.

The Carlyle, Upper East Side

If the Carlyle ever closed, an iconic bit of the city would be lost along with it—that’s how synonymous this storied hotel is with the soul of New York. It’s where Princess Diana stayed during her royal visit in the 1980s, and where her son Prince William returned with his new bride Kate Middleton two decades later. John F. Kennedy stayed there so much that it was dubbed the “New York White House.” After he was assassinated, Jackie lived there for three months. Bemelmans—named after Madeline creator Ludwig Bemelmans, who painted murals on its walls—remains the most famous bar in the city. There’s a documentary about it, books about it, and even a clothing line about it.

That doesn’t mean it’s outdated or stuffy, by the way: with interiors by Thierry Despont and Tony Chi, the Carlyle encompasses both old-world charm and the modern day. And since it’s within walking distance of The Metropolitan Museum of Art, the Guggenheim, The Frick, and Central Park, you’re at most minutes away from the city’s best cultural and leisure offerings.

The Mark, Upper East Side

You probably recognize the exterior of The Mark. Why? Because every Monday in May, it’s in the background of a million paparazzi photos as celebrities from Lady Gaga to Kendall Jenner depart from its lobby to the Met Gala.

Its inside is of equal grandeur: designed by Jacques Grange, who also did interiors for Yves Saint Laurent and the Princess of Monaco, the lobby is adorned in bold black and white stripes. (That color combo serves as The Mark’s chic calling card, plastered over everything from their pedicab, to their hotdog cart, to their custom swimsuit.) Added bonus: Its restaurant, The Mark by by Jean-Georges, is divine. Order their cheeseburger with black truffle dressing.

Like The Carlyle, it’s located in close proximity to many major museums and is half a block from Central Park—of which some suites even have an expansive view. (Remember the Duchess of Sussex’s baby shower? That was hosted in their penthouse.)

The Thierry Despont-designed hotel rooms at the Fasano Fifth Avenue supply an air of subtle luxury with their warm beiges, crisp whites, and views of greenery-filled Central Park. Since the property only offers suites and duplexes, many guests at the Fasano stay there for weeks, using it as a posh pied-a-tierre of sorts. They’re not so interested in delivering an in-your-face style statement. Instead, they want you to feel right at home.

It’s the perfect place to post up if you’re looking for a more discreet, peaceful hospitality experience. The Fasano, which doubles as a private member’s club, doesn’t have any social spaces open to the public, and, with just a handful of rooms, interaction with other guests is minimal. The service is impeccable, the food elevated without being stuffy, and the front desk will know you by name. Plus, with the Upper East Side’s main attractions close by and Central Park across the street, you’ll still feel in the middle of it all.

The clientele of the Aman is so dedicated that they’ve given themselves a nickname—Aman Junkies. (According to a 2016 Town & Country story, repeat guests constitute 50 percent of Aman’s business.)  Now, they’ve got a new outpost to visit: Aman New York, the hospitality brand’s first property in New York City and first urban property in North America.

Housed in the historic Crown building on 57th Street, designed by the same architects as Grand Central Terminal, Aman’s signature Japanese-meets-Scandinavian minimalism is present in full force: neutrals, woods, and shades of black adorn the spacious 83 guest rooms, the vast spa, and the rooftop terrace. Modern art is scattered throughout: each suite, for example, has a mural by contemporary Japanese artist Ryoko Adachi. Yet despite all the worldly influences, the property also has a local touch: a jazz club, open to the public, offering nightly performances.

It perhaps goes without saying that a hotel created by the world famous crystal company is going to be extravagant. Over 15,000 Baccarat pieces, from chandeliers to glassware, grace its reflective halls, and its ​​Gilles & Boissier designed Grand Salon looks like it could be a room in a grand European palace. The Baccarat, which is close to MoMA, Broadway theaters, and Rockefeller Center, is perfect for visitors wanting to hit New York’s main attractions.

The Ritz Carlton‘s newest outpost on 28th Street and Broadway boasts some of the best views from any hotel in the city: to the north, you can gaze closely upon the Empire State and Chrysler buildings, whereas to the south, the Freedom Tower is visible at the tip of Manhattan. (Smartly, guest rooms start on the 14th floor, meaning guests can soak in the splendor from their beds—or, quite literally, from their bathtubs.) On the ground floor is Zaytinya, a restaurant by celebrity activist chef José Andrés that serves up innovative Mediterranean cuisine.

Private members’ club The Ned, which opened to much fanfare this spring, includes a well-appointed hotel where no application is required. The guest rooms follow a rich jewel-tone aesthetic, inspired by the Beaux-Arts architecture of the building and the 1920s style of their sister property in London. “I wanted to make it glamorous—to have loads of atmosphere,” CEO and founder of Soho House Nick Jones previously told Vogue.

Housed in a Romanesque Revival Building on (you guessed it) Mercer St., The Mercer is in, and perhaps is, the heart of SoHo: when it opened in 1997, the hotel instantly became a fashionable hangout for the then up-and-coming neighborhood’s It-crowd. In fact, so stylish are the hotel’s minimalistic Christian Liaigre interiors that Calvin Klein and Rupert Murdoch would go on to hire the designer for their own personal projects.

Nearly 25 years later, The Mercer still hasn’t lost its cool, regularly welcoming a slew of celebrities from Kylie Jenner to Kaia Gerber (that’ll happen when your sister hotel is the Chateau Marmont). Oh, and did we mention that Jay Z and Kanye West recorded “Watch the Throne” in suite 208?

Reflective of its Brooklyn neighborhood’s industrial roots, The Wythe is housed in an old barrel and rope factory. Yet it doesn’t feel concrete or cold—the rooms are adorned in bespoke toile wallpaper by Dan Funderburg and contemporary, colorful art hangs in many of the common spaces. You’ll want to order room service: their restaurant, Le Crocodile, received a three-star review from The New York Times.

The Roman and Williams-designed Ace Hotel in downtown Brooklyn has attracted the attention of aesthetes everywhere thanks to its facade by modernist artist Stan Bitters, a sculptural light installation that acts as an homage to Tokyo’s now demolished Hotel Okura, and a bar by Verdan Jakšić. Locals and visitors alike will find much to appreciate about the ground floor restaurant, As You Are, which serves up delectable pancakes for breakfast and seafood worth savoring at dinner.

The Robert De Niro-owned Greenwich Hotel is swanky yet secretive: there’s a no photos rule and many common spaces are for guests only. Unsurprisingly, it regularly attracts an A-list celebrity clientele, who get to enjoy amenities like its Japanese-style spa and open-air courtyard. Their excellent Italian restaurant, Locanda Verde, is beloved by visitors and New York locals alike. 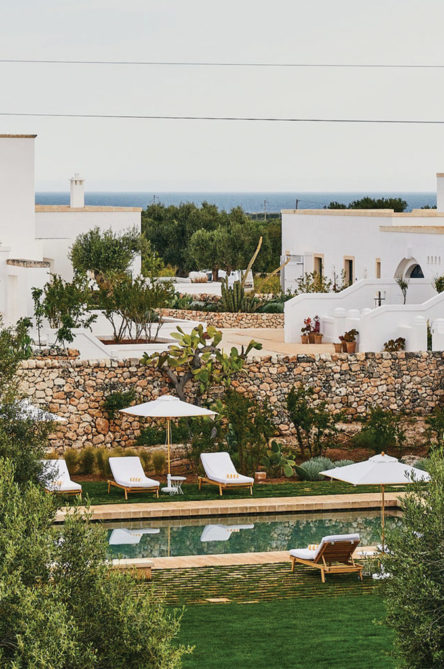 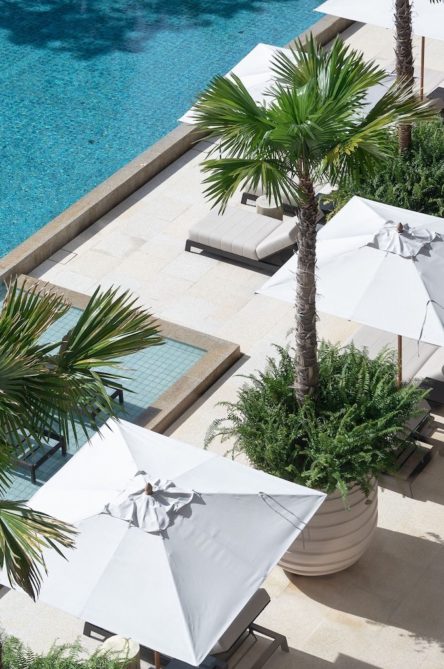 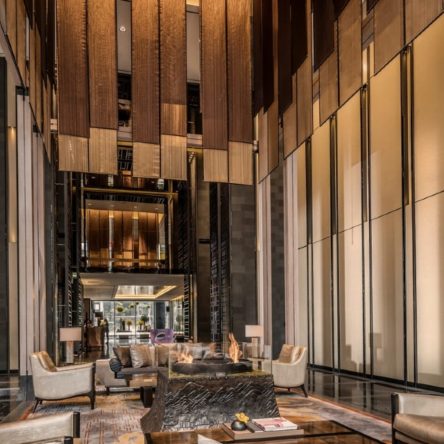