The late Lee Alexander McQueen’s work for his eponymous label and Givenchy, where he served as creative director from 1996 to 2001, were deeply rooted in artistry and originality, inspiring countless others to do the same. His partner-in-crime? Alexander McQueen’s current creative director, Sarah Burton. Helming the British label since McQueen’s death in 2010, she has continued his legacy in more ways than one.

The designer has lent her support and expertise to organisations such as A Team Arts Education, which assists the fast-growing and diverse youth population in the East End of London—where McQueen was raised—to pave their way in creative industries. This was followed by the recent launch of the maison’s pre-autumn/winter 2022 collection, which featured bright swathes of fabric, corsetry, graffiti motifs and McQueen’s signature sharp tailoring, capturing the dramatic yet free-spirited essence of the house.

Riding on the explorative nature of the collection, Burton invited 12 artists to respond to a pre-autumn/winter 2022 look of their choice for a project titled Process. Selected for their unique approaches to art, through different mediums or otherwise, the artists were also given complete creative freedom over their work. “I wanted to engage in a new creative dialogue with the collection this season and see how the artists interpreted the work that we created in the studio. It’s been very interesting to see how creativity has sprung from so many different perspectives, and the outcomes that have been varied and beautiful,” Burton stated in Alexander McQueen’s press notes.

The result? Artwork ranging from epoxy resin sculptures to embroidered Polaroids. The 12 pieces were put on display in June alongside the corresponding designs from the line-up at the brand’s London Old Bond Street store. Other accompanying projects include a documentary and a magazine on the artists’ creative processes. The first look from Alexander McQueen’s pre-autumn/winter 2022 collection, a yellow gown with bone detailing, had been reinterpreted into a three-dimensional collage by Chile-based sculptor Marcela Correa.

Elements from the original design were evident here, from the sunny shade of yellow to the pleats emulating the piece’s theatrical silhouette. Dubbed ‘Dressing Yellow’, Correa crafted small models from epoxy resin, fibreglass, glued paper and magazine clippings. The work is partly informed by the idea of “absent faces and broken memories” amid the pandemic.

“It’s been very interesting to see how creativity has sprung from so many different perspectives, and the outcomes that have been varied and beautiful.”

However, making a three-dimensional collage was a first for the artist. “It is my first three-dimensional pictorial work so it is maybe the beginning of a new stage. The materials interest me as a field of research and not as formal results. This exercise, especially thanks to the intensive use of colour as a three-dimensional material, opens new doors, new research,” Correa explained in the press notes.

Meanwhile, Guinevere Van Seenus, a photographer and model based in the US, took to photography to reimagine a strapless silver dress from the collection. Her work for Process, ‘Untitled’, is a series of embroidered Polaroids and photographs starring the design. “I work alone and try to make friends with the accidents that happen on film and Polaroid. A lot of my work is about luring the accidental into a collaboration with what I see in my mind’s eye,” Van Seenus said of ‘Untitled’.

And from multidisciplinary artist Bingyi, who is based in Shanghai, China: a wedding dress designed to fall off the wearer’s body in pieces as she walks down the aisle, followed by a suit printed with a note of love in Chinese.

Labelled ‘The Wedding Dress that Takes Off Itself’, Bingyi’s work for Process, which is crafted from ink paintings, cotton, linen and paper, is influenced by the black satin dress with an asymmetrical draped skirt from Alexander McQueen’s pre-autumn/winter 2022 collection. She explained her designs in the press release: “Throughout the marriage, the man and woman begin with a ritual and, in the end, they have nothing but themselves for each other.”

From Process to A Team Arts Education, Burton has proven herself to be a trailblazer in assisting up-and-coming talents in the creative industry. For example, a fabric donation scheme redirects the house’s surplus textiles to fashion students all over the UK, while in-depth workshops held by the maison’s craftsmen are designed to enrich and to educate. Safe to say, Burton will continue to champion the house’s core values of freedom, boldness and authenticity during her reign. 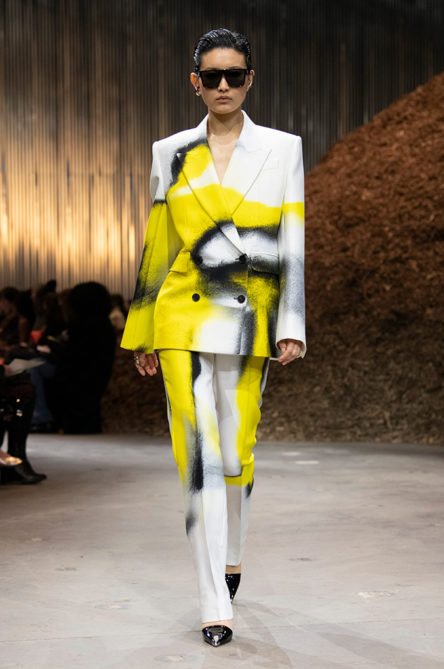 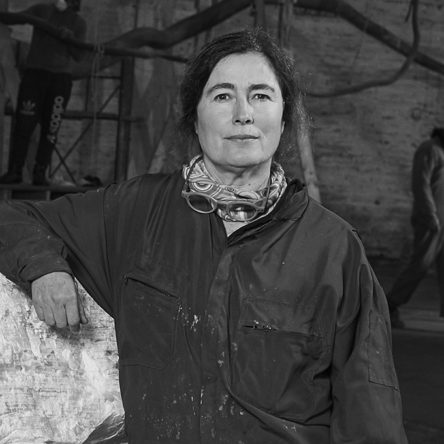 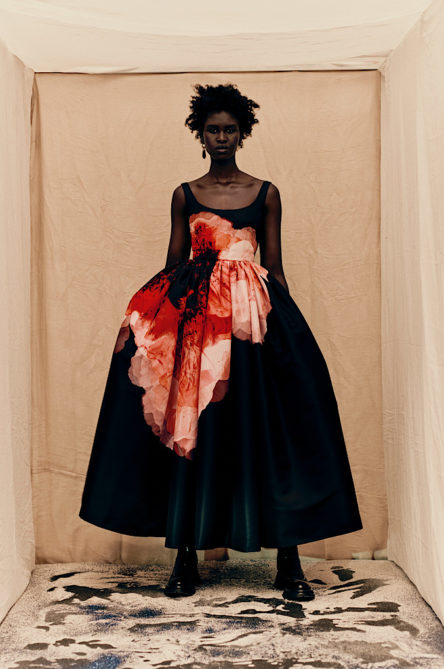