“I’ve been called the herpes of the art world,” Polina Korobova says with a grin, “because you can never get rid of glitter.” The title may come off disparaging, but the 25-year-old wears it like a badge of honour. For someone whose artistic signature has become coating her body in swathes of glitter, it makes sense.

Korobova, who set foot in Singapore at 16, now calls our island-state home. She has a day job as a producer at an advertising agency, but that is not what she is known for. Instead, Korobova earned her burgeoning popularity through her distinctive style of performance art, where she layers on glitter before launching into a series of movements at whim. As an unmissable star in the constellation of up-and-coming creatives in Singapore, Korobova is known as the Glitter Queen.

Pre-pandemic, she would be putting up her dazzling shows at various exhibitions on most weekends. Korobova’s act—which features her as both the artist and the artwork—draws crowds hypnotised by the sight of a woman dripping with glitter from every limb and catching the light at every turn.

These days, you’ll find her on Instagram, finding unexpected ways to create the same effect. Her circuit breaker project, which she calls ‘Polina makes art until it’s over’, sounds exactly like the stream-of-consciousness spurt of creativity it is. For the series, she created various art pieces in a wide range of mediums—from face paint and digital graphics to, of course, glitter.

“It’s less about what my work looks like and more about how it makes the viewer feel. If it makes you smile, then I’ve hit my goal”

Her process is as messy as you would imagine. “I slather my body in Vaseline and then pile the glitter on. It gets everywhere, my eyes, nose, mouth and even in my vagina,” she shares, perched on a chair in Vogue Singapore’s dressing room after a photo shoot at Jurong Lake Gardens. Korobova is chattering away animatedly even as she tries to scrub off her sketched-on eyebrows—the sweltering tropical heat that beat down on our backs throughout the day was no match for her bubbly personality and dry wit.

“I can’t get these brows off but I feel like they’re a bit much for dinner,” she says, gazing intently into the mirror as she wrestles with a face wipe. Her make-up for the shoot had been kept fresh-faced and natural, but the shock of bright blue hair that frames her expressive features renders her impossibly striking anyway.

The remnants of make-up on her face bother her more than I would expect of someone who treats glitter like a second skin. The shiny, impossible-to-remove substance is notorious for leaving havoc in its wake, and yet, it has an unmistakable draw—its ability to spark a visceral joy that taps into the childlike part of your brain unbothered by things like clean-up. That is precisely the chord Korobova wants to strike. “The reaction is always amazing. It starts with shock and then they’re like ‘Oh my gosh, wow, it’s glitter!’” she says, eyes shining with mirth.

Still, glitter is hardly the only card up Korobova’s sleeve. Her body of art is unbounded, unapologetic and often bright enough to hurt if you stare for too long. She creates freely, crafting kaleidoscopic sculptures from pom-poms and Play-Doh, surreal pearl- studded face masks, and candy-coloured paintings full of life and texture. “It’s less about what my work looks like and more about how it makes the viewer feel. If it makes you smile, then I’ve hit my goal.”

Now at the tail end of a formal arts education spanning nearly two decades, Korobova’s first foray into the creative world began as a precocious seven-year-old, when her paintings caught her parents’ eyes and prompted them to whisk her off to an art school in their homeland of Russia, where they all lived at the time. This was a traditional establishment that followed old-school methods, which she butted horns with from the get-go.

“It took me a long time to come to terms with the fact that I’m Russian. When I first left home, I wouldn’t even tell people where I was from”

“I was the first student who had been held back in the entire 80 years the school had been around,” she says impishly, wringing her hands. Her proclivity for bright colours and her messy streak drove her art teachers mad, but it makes glitter seem like a natural choice—an easy conduit for the whimsical brand of ecstasy Korobova wants to evoke.

She first took a shine to the material four years ago, when she painted a map of her homeland, Russia, with ultra-reflective silver specks. A take on the scratch-off maps from the ’90s, the essence of this piece reflected Korobova’s conflicting sentiments towards her heritage.

“I called the piece ‘creating your own utopia’, which is funny, because it actually took me a long time to come to terms with the fact that I’m Russian. When I first left home, I wouldn’t even tell people where I was from,” Korobova says. Revealing her heritage would usually lead to a host of unsolicited questions—everything from the innocent “Do you see bears often?” to the inflammatory “You must be a prostitute, then?”.

Racist commentary aside, Korobova had personal reasons that widened the chasm between herself and her heritage. She likens her teenage years in Russia to being in prison. “I felt trapped, like I couldn’t express myself creatively. Things are different in Russia. You don’t leave the house alone after 8pm, you don’t walk on the streets alone. These are unspoken rules. The political climate is super complicated and it has caused a lot of trouble for the Russian people.”

The tension between her different identities—one, a carefree glitter queen who lives to spread sparkle, and another, a sensitive young woman deeply affected by the things around her—reveals the darker motivations behind her work, belying the utopian images of pure, childlike fun visible at the surface. Therein lies the great contradiction that makes her art so appealing—she presents the most shadowy parts of our lives, splashed in glitter and technicolour.

One of her recent projects, for example, sees Korobova re-colourising old family portraits by painting over them in bright shades and embellishing them with rhinestones, appliqué flowers, and, of course, glitter. The extravagant treatment of these images is at odds with the memories they bring back. “These photos hold a lot of pain, so I see it almost like I’m redoing them. It’s healing and it has helped me cope.”

“Learning about Pussy Riot was like an awakening. I felt a new urgency, like I wanted to be a part of this movement too”

When she speaks about her family, who are now living in Cyprus, Korobova’s eyes soften. Like many, the pandemic has put things into perspective and brought them closer together. “Lately, we have become inseparable. We talk every night and video chat often,” she says.

Tight-knit as they may be, Korobova’s family worries whenever her art takes a turn for the political, which is often. Some of her favourite pieces, for example, are heavily influenced by Pussy Riot, a Russian feminist collective that has made headlines time and again for its high-profile protests against Russia’s governing figures and power structures.

“These girls went to jail for a long time because they were standing up for what they believe in. Learning about them was like an awakening. I felt a new urgency, like I wanted to be a part of this movement too,” says Korobova, conviction fuelling every word.

Her subsequent feminist pursuits have been channelled through her art, spanning glitter-filled images that thinly veil their intentions with glamour. She has loaded lace underwear with glitter in place of menstrual blood to spark conversation about the taboo topic. She has been photographed in the nude (save for a coat of glitter enveloping her body) in support of Russian activist Yulia Tsvetkova, who was imprisoned on pornography charges for her drawings of female bodies promoting body positivity. She has embedded the words ‘Is the Future really Female?’ onto a glitter plaque, questioning the legitimacy of our standards for gender equality.

She has also renewed her connection with her heritage—albeit from a distance. “My breakthrough came from learning about the amazing history and art tied to Russia. I’m proud and curious to find out more about my homeland even if I’m away,” she says. Her accent, which combines hints of a Russian inflection with a distinctive Singlish slant, is evidence of the fact that she has made a home for herself in Singapore. “When I speak to taxi uncles and hawker aunties, they won’t believe that I haven’t grown up here,” she laughs.

Newly emerging from the pandemic, she is a young woman with places to go, but creative burnout during months of isolation has taught her to take it easier on herself. Hard-working by nature, she fills her days with work as a general rule. But when it comes to art, she is following her heart. “I’m not playing the Instagram game anymore. I don’t care what looks good on my feed and what gets clicks. I’m going to make what inspires me and what makes me happy. Hopefully, that will make you happy too.” 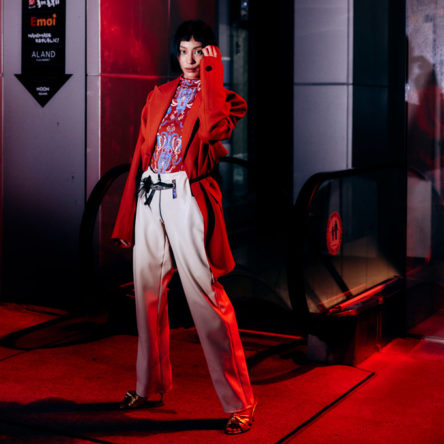 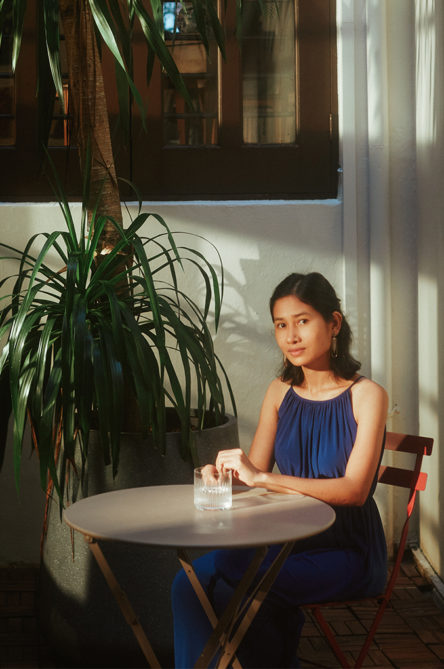