It’s impossible to sum up Karl Lagerfeld’s traits into a single sentence. The polyglot designer, photographer, writer, and iconoclast was a man of all seasons, able to capture the hearts and minds of both the fashion-obsessed and the casual fan. At Chanel, he left his mark on every item that walked the runway, from the minaudière bags to the boater hats, but perhaps none was more memorable than his bridal dresses.

Over the years he has used the bride to make statements about gay marriage, gender identity, austerity, showmanship, and above all else, pure, unadulterated beauty. There have been meter-long trains, sharp pantsuits, cascading lace appliqués, and more than a few mod-ish minidresses that upended the tradition of bridalwear. And then, of course, there was the bridal maillot Vittoria Ceretti wore last month at his final haute couture show. Here, 30 of Lagerfeld’s most memorable brides.

Ines de la Fressange was a favorite model of Lagerfeld’s in the ’80s. Here, she wears a high-collar dress with bow-trim veil.

Shalom Harlow models a cut-out dress made from many camellia flowers.

Minimalism is rare at a Lagerfeld outing; in 1999, Kirsten Owen was one of the most spare brides ever in this angelic white dress.

Devon Aoki in a look that proves that some wedding looks aren’t just bout the dress. Accessories, like these plastic boots, can make all the difference.

Tiers of tulle and silk make up this romantic look worn by Devon Aoki.

In 2002, Lagerfeld turned a simple knit maxi into a wedding day essential with this button up dress and cardigan worn by Natalia Vodianova. He resurrected the idea on a ready-to-wear runway almost 10 years later, with Rihanna turning up in a beige cardigan maxidress for Chanel’s fall 2013 couture show.

Lagerfeld does love a cape, and few wear it as well as Alek Wek.

Here comes the bride! For the finale of his show, Karl Lagerfeld gave Solange Wilvert away on the runway. Her dreamy look included a ribbon-tied bouquet of white roses. For another take on the Maison’s camellia signature, see this textural dress worn by Solange Wilvert.

The ethereal Lily Cole in a dress to match for spring 2006.

Irina Lazarenu was Lagerfeld’s mod muse in the late aughts. Her dollybird bangs made her the ideal bride to sport this minidress-and-thigh-high boot combo.

Sport shades and couture? Chanel did it first. For fall 2007, Lagerfeld took it to the max in this beaded and feathered dress worn by Siri Tollrod.

Freja Beha Erichsen was Chanel’s a techno-craft bride in a beaded suit and paper headdress.

Baptiste Giabiconi and Lara Stone make quite the couple on the fall 2009 couture runway.

Abbey Lee Kershaw and Giabiconi as the bethrothed in Lagerfeld’s metallic-tinged wedding looks.

Kristen McMenamy upends expectations in this drop-waist dress that’s traded a veil for gauntlets and stilettos for flats.

For fall 2011, Saskia de Brauw sported a feathered boater with a net strip across her eyes in lieu of a traditional veil.

Kati Nescher and Ashleigh Goode prove that two brides are better than one at the spring 2013 show. (They have some help from a young Hudson Kroenig.)

Cara Delevingne stomped out on the runway in crystal-trimmed sneakers for Chanel’s spring 2014 show. Kroenig was there to help her with her train.

Model Ashleigh Goode was five months pregnant when she stepped onto Chanel’s fall 2014 runway in a dress that became the star piece in the Costume Institute’s 2015 Manus x Machina exhibit.

At the Chanel casino, Kendall in queen in a Vegas-worthy wedding tux.

In a first, Lagerfeld sent out Mica Arganaraz in a richly embellished hoodie for the spring 2016 show, a rare concession for comfort on his runways.

Edie Campbell wears a dramatically feathered train and blush suit as the bride for fall 2016.

Lily-Rose Depp wore one of Lagerfeld’s most resplendent gowns yet for the spring 2017 show, in blush pink with clusters of ruffles.

Camille Hurel was the lucky model chosen to wear this sweeping gown at Chanel’s fall 2017 show.

Luna Bijl went dapper in this tux-with-train combo at the spring 2018 show.

Mint can be a wedding colour—just ask Adut Akech, who sported this Chanel suit with a thigh-high slit for the brand’s fall 2018 show.

Vittoria Ceretti had the honour of being the final bride to walk the runway in one of Lagerfeld’s creations. Hers was an embellished swimsuit with a trailing veil. On Instagram, the model wrote, “I woke up in the middle of the night and started drawing this dress for you. The next day I brought the paper in at Chanel and I told them ‘this is either for Vittoria or we’re not doing it.’ This is what Karl told me the last time I saw him in Paris at the fitting, wearing the bride dress. Just like every other time with him, my heart was fulfilled with love, happiness, and honour.” 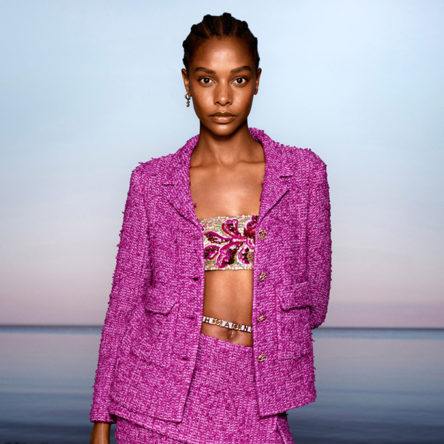 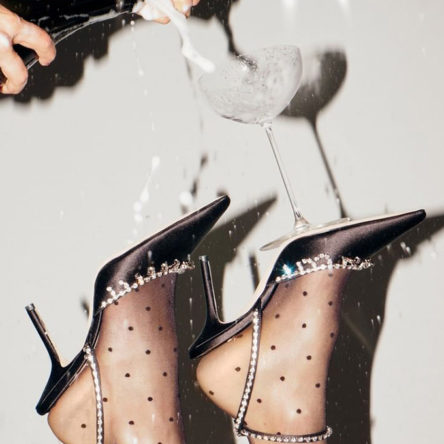