The galactic sci-fi set Kim Jones had erected for his show inside La Bourse felt entirely apt. His haute couture for Fendi always seems like a flight of fancy: fabricated for the thrill of it, for the fun of it, and the extravagance. Sitting under a black globe and suspended fragments of Roman arches—smoke and radiance in the air—watching one lavish evening gown after the other glide through his spaceship, you could as well have found yourself inside a Marvel film, or watching one at the cinema.

“At this moment in time, couture is quite a strange thing with what’s going on in the world. Customers can’t see it, so everything gets sent to them. It’s a bit of a fantasy,” Jones said during a preview, referring to the restrictions that are still preventing many clients from traveling to Paris. In the pandemic age, those conditions can either heighten the mirage-like quality of haute couture, or they can give it real importance. The métier can provide a rare space for ideas that can reflect and affect a broader discourse on fashion and beauty.

This season, Jones continued his evening-centric approach, proposing a series of gowns he said illustrated the craftsmanship and techniques he can’t show in his ready-to-wear for Fendi. Like previous collections, Rome played muse: “It has so many layers to it. It’s such an ancient city,” he said. “We’re always thinking of the past, present, and future of it. The idea of different times and that very spiritual side of Rome, which becomes almost celestial; almost spacey.”

Space, astrology, and heaven have been themes in this season’s couture and men’s collections. No doubt mildly inspired by last year’s billionaire space race, they mainly represent the great escape. The pandemic’s part in that scenario is pocket psychology. Jones, who said he had been re-reading Dune and a book on Star Wars by George Lucas, approached the theme with a Hollywood zest that recalled a number of sci-fi films centered around the age-old conversation between the ancient and the futuristic.

Mirroring that dialogue in the time-transcendence embodied by Rome, Jones mixed the city’s structures with futuristic imagery and applied it to eveningwear. Renditions of the statues outside Fendi’s monumental Palazzo della Civiltà Italiana headquarters hand-painted on velvet dresses and a sheared mink cape looked like the statues in Prometheus or the landscapes in the scenes in The Planet of the Apes. Monastic dresses—black cassocks from the front, white nymph-like gowns from the back—evoked those of the Magisterium in His Dark Materials.

That was perhaps the celestial component Jones was talking about, symptomatic of a time when escapism has become a spirituality in its own right. Elsewhere, he applied the contours of a Roman fountain to a white dress and “filled it with mink,” while the radiant opening and closing dresses seemed to morph the lines of the peplos—the oldest dress in history—with a sci-fi structure.

Jewelry by Delfina Delettrez—the daughter of Silvia Venturini Fendi—was a small but shining star of the show. Executed in natural crystal geodes and amethyst, her spiky black ear cuffs had an aggressive glamour about them that broke with the spacey romanticism of it all. Packed with emotion, her pieces made you consider how the hell she’d made them and what inspired that kind of expression. You wonder if she could adapt her vision to surface decoration, too.

The collection was Jones’s first haute couture show for Fendi with a live audience, and a nice opportunity to see his work in 3-D. As a showcase of the skill of the house’s Roman atelier and a theater of ballroom fashion, it brought some fantasy to the curtain call of haute couture’s big comeback season. 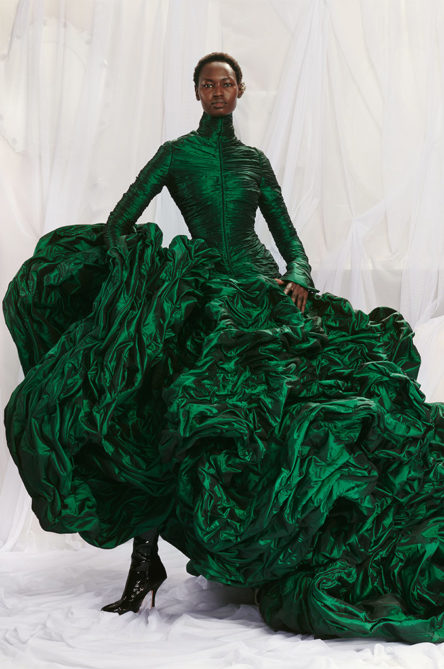 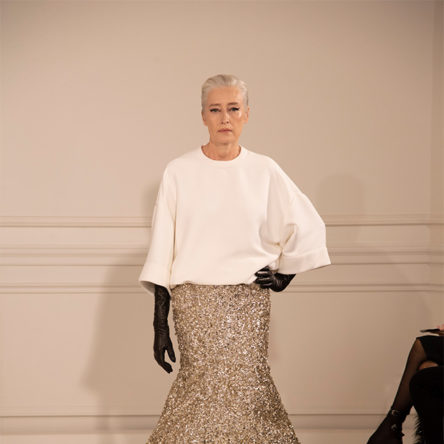