Balenciaga staged its dystopian autumn/winter 2021 collection as a virtual reality runway show presented through Oculus glasses, and released the video game, Afterworld: The Age of Tomorrow.

The show was a multi-faceted digital experience

Separating fashion from fiction is becoming increasingly difficult in the digital age. Over the past nine months, we’ve grown alarmingly used to digital show presentations, video calls, and an amplified level of online shopping for clothes we don’t even know when we’ll get the chance to wear in public. In many ways, lockdown has felt like the surreal life: an alternate dimension. One of fashion’s most astute commentators, Demna Gvasalia masterfully encapsulated this existential crisis in his autumn/winter 2021 collection for Balenciaga. Along with an original video game titled Afterworld: The Age of Tomorrow, made available to the public through the brand’s website, he sent some 30 members of the press an Oculus headset showcasing—in painstaking virtual reality—a full runway show of a collection steeped in themes of dystopia, escapism and existentialism.

It was presented through a VR headset

Two days before the show, a big black Balenciaga box arrived on my doorstep. Inside it was a VR headset with two hand controllers. For those of us who haven’t played a video game since Nintendo NES circa 1989, watching a fashion show in virtual reality is completely mind-blowing. Set in a blacked-out venue with a raised runway and a soundtrack reminiscent of a video game score, it was literally like being there IRL. So vivid were the details that you could turn to the people around you and study their body language and wardrobe. The highly diverse audience was fictional—i.e. real-life editors and buyers hadn’t been recreated, although I think Justin Bieber may have been three seats down the row from me. Sitting there felt exhilaratingly real. At one point, I caught myself thinking I should be wearing shoes, then remembered I was alone, on my sofa, in London. “The fashion industry will have to face this inevitable new chapter and come up with its own solutions in everything from how it deals with creativity and innovation to how it makes and communicates product,” Gvasalia told me after the show, reflecting on his format. “It is unknown territory, but a very exciting one. Only the true and authentic creative intelligence will be able to pass a long-term test of survival. And next to all that we will still need clothes to express ourselves through.”

The collection featured armour and spacesuits

Inspired by the video game Gvasalia created as part of the show, the looks in the collection represented the players featured in the game, which in turn referenced classic video game archetypes. The knight in shining armour materialised, quite literally, in shining armour; a nod, no doubt, to Nicolas Ghesquière’s spring/summer 2007 robot collection for Balenciaga, but reinterpreted in medieval chevalier form in beautiful pieces forged by bona fide armour-makers in France. The valiant astronaut made an appearance, too, mixing with the likes of face-painted goths and post-apocalyptic characters in ragged knitwear, ripped and patched-up denim, tattered cocktail dresses, and massive threaded coats that looked like gutted teddy bears. “Fashion in its essence is a sort of armour today. It completes our personal identities and shows us in the way we want to be visually perceived by the world around us. So, in a way, the way we dress does play a role in our self-protection. This is a metaphor, but in reality, the armour in this collection was made to connect the long-forgotten past to the much-awaited future,” Gvasalia said. “We used the exact craftsmanship used in the Middle Ages to make the armour. It can be seen as a sort of a military sportswear of the time, which protected the warriors but also made their movements possible in battle. The articulation of that medieval armour, however, is exactly the same as that of a futuristic robot or android, because the human body is still the same all those centuries later. And my job as a dressmaker is to explore that relation between the human body and what it wears.”

Gvasalia said the show was about freedom and hope

Experienced through the somewhat gritty lens of virtual reality—and within Gvasalia’s muted set—the show’s characters felt like a cast of heroes and anti-heroes: survivors of an apocalypse, the inhabitants of a new world. “‘Apocalyptic’ is very last season to me,” Gvasalia said, “despite the fact that our show at the end of February actually did reflect and somehow predict the horrors we would all have to face a few days post that show. The title Afterworld stands for the world not only post-pandemic but also the world I hope we will live in at one point in the near future: somewhat ‘unpolished’, exciting, free and spiritual.” Armour and spacesuits may evoke ideas of self-protection, fright and flight, but in the eyes of young gamers, they represent the wonder and adventure of the past and the future. Escapism is an obvious motif in turbulent times, but rather than getting airy-fairy about it, Gvasalia’s collection sent us into outer space—into virtual reality—and plonked us firmly back on Planet Earth again to actually deal with reality. It was an elegant and perfectly-timed study of existentialism in the digital era.

As for the Afterworld: The World of Tomorrow—the first-ever game produced by a fashion brand—I had only made it to level four by the time these words were published. A walking experience more than anything else, it takes you through Balenciaga-centric scenery, including a store setting, urban streets, a bus stop and so on. Following the film that the house released in October, captured through the streets of Paris, the game felt like a further cementation of the Planet Gvasalia. It’s a cityscape that may look dystopian, whose inhabitants may seem scary at first, but which is, at its core, paved with good intentions. “Without going into some new-age spirituality sermon, I do believe that the only way for humanity to start a new and hopeful chapter is to reconnect to itself, to find a new and modern spirituality in ourselves and the values we live by,” Gvasalia said. “We live in the moment of change that is dramatic as much as it is hopeful.”

This story was originally published on British Vogue 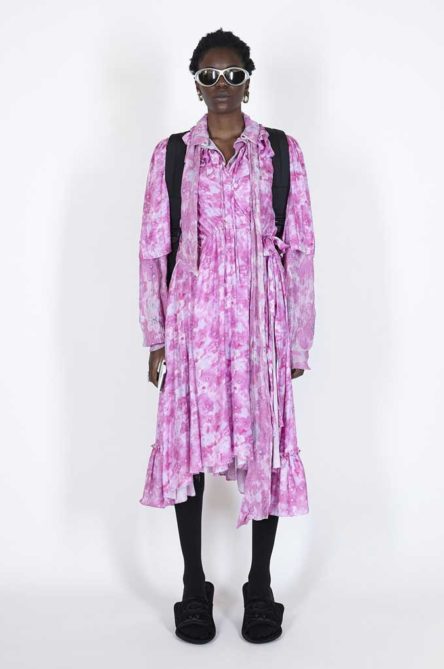 Players assemble! Balenciaga catapults us into the year 2031 via its high-fashion video game